The champagne corks were popping in Halifax and Vancouver on October 19 when the Canadian government announced that two shipyards there have been chosen to build a new, multi-billion dollar generation of warships and coast guard vessels.

The government will spend at least $35-billion over the coming years to build up to 15 frigates and destroyers,1 six to eight arctic patrol ships, an icebreaker, four coast guard vessels and two navy support ships. 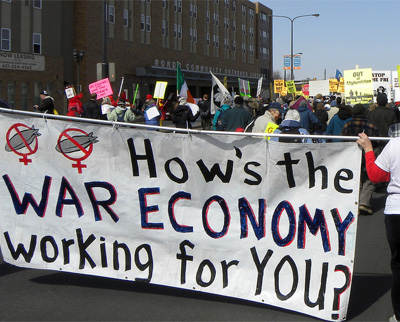 The warship program is but the latest mega-expenditure in a militarization program that began with previous Liberal Party governments and continues under the Conservatives of Prime Minister Stephen Harper.

According to a March, 2011 study published by the Canadian Center for Policy Alternatives, Canada will spend at least $23-billion on its military forces in fiscal year 2010-11. That’s 26 per cent higher than in fiscal 1989, the year the Berlin Wall came down, and 61 per cent – or $8.4-billion per year – higher than in fiscal 1998, the year Canadian spending reached its post-Cold War minimum (all figures have been adjusted to 2010 dollars to account for inflation).

The amount of annual military expenditure will continue to rise as spending on an untendered F35 fighter jet program and countless new equipping of the Canadian army picks up steam.

The expenditures fit with Canada’s increasingly aggressive military posture in the world. From its combat roles in Afghanistan and Libya to its police/military occupation role in Haiti, Canada is joining the front ranks of imperialist countries that are increasingly turning to military force to advance their economic interests and maintain the unequal and unfair international status quo.

Earlier this year, Canada announced that it will acquire seven new military bases on foreign soil around the globe.

Militarization of the Canadian North

The ship program is a key element of the Conservatives’ declared intention to further militarize the coastal waters off Canada, including in the Arctic region.

As a result of the melting of the polar ice cap, the far north is now vulnerable to the opening of shipping lanes and greater oil and gas exploitation. The Conservative government has made demonstrative steps in the direction of both since its first election in 2006.

On the west coast, the government has said it needs greater coast guard and navy capacity to intercept ships carrying refugees to Canada from war or environmental disaster zones. It is also giving the quiet go-ahead to massive projects to move oil and natural gas shipments from Alberta and B.C. to and from the west coast, which are among the most difficult to navigate and environmentally-sensitive waters in the world.

A widely-held misconception about the shipbuilding program is that the Halifax shipyard will build a ‘combat’ component – frigates, destroyers and Arctic patrol vessels – while the Vancouver yard will build the ‘non-combat’ part – coast guard and supplies ships and an icebreaker. In reality, all of the ships to be built are part of a military whole.

Political Parties Are Unanimous in Support to Warships

Unlike the F35 fighter jet program, which has received some criticism from opposition parties in Ottawa because it was untendered and because some argue that Canada’s existing jets are suited to the country’s current needs – the warship program has the unanimous support of federal parties and the parties in the two provinces where the ships will be built.

During the federal election campaign last April/May, then-NDP leader Jack Layton called on the government to scrap the F35 program and build warships instead.

Dexter welcomed the Atlantic Defence and Security Conference in Halifax in 2009 with the following remarks:

“Over the last seven years, Nova Scotia’s aerospace and defence industry has grown by an astounding 183 per cent. In 2008, aerospace and aerospace parts manufacturing accounted for more GDP (in Nova Scotia) than fishing, forestry, agriculture and tourism combined…

In keeping with Canada’s increasing warmaking posture in the world, the Canadian military and weapons manufacturing industries are becoming dominant forces in the political life of the country and the provinces.

Critical reporting of Canada’s foreign military adventures has all but disappeared from mainstream media. Professional sports programming now includes a strong, pro-military message. The logo of the professional hockey team recently returned to the city of Winnipeg is a fighter jet. Cultural festivals now typically feature a strong presence of the Canadian military.

Armaments producer Lockheed Martin is one of the potential beneficiaries of the ship program and it has established a strong presence in Nova Scotia. In 2008, it won a bid to provide a combat systems modernization of the Canadian Navy’s 12 Halifax-class frigates. The contract will provide a new command and control system, radars, tactical data links, electronic support measures and other warfare capabilities to the ships.

In 2009, the company opened an advanced weapons training and test site in an industrial park in Dartmouth (across the harbor from Halifax). It stands to profit handsomely from the new ship program.

Sadly, many trade unions support the warship and other militarization programs, in the name of ‘creating jobs.’ In Nova Scotia, some unions are taking their distance from antiwar groups that they previously supported. The Nova Scotia Federation of Labour, for example, has ended its annual financial grant to the Halifax Peace Coalition.

While supporting federal militarization programs with generous financial grants, the Nova Scotia government is following in the footsteps of other provincial governments, including British Columbia’s, in privatizing and sharply cutting health care services. (In Canada, an important part of health care financing is provided by federal dollars but administered by the provinces.) As reported in the October 1 Halifax Chronicle Herald, the government has asked a research firm that profits from health care privatization, Ernst and Young, to prepare recommendations for the future of the province’s health care system.

“I believe that health care is under attack in this province and in this country. And Canadians have to stand up,” Janet Hazleton, president of the Nova Scotia Nurses’ Union, told a news conference in Halifax on October 1, called to protest the research being commissioned by the government.

Hazleton claims the province has already decided to privatize some healthcare services. “There’s not many of us who hire consultants and then don’t know what they are going to say,” she told the Herald.

Ernst and Young is a member of the Canadian Council for Public-Private Partnership, a pro-privatization advocacy agency. Earlier this year, the provincial government announced a health care spending freeze.

Tamara Lorincz of the Halifax Peace Coalition argued against the warships in a column in the September 10 edition of the Halifax daily Chronicle Herald, “The federal government should sink the ship strategy,” she wrote.2

Lorincz was a candidate for the NDP in the 2008 federal election. She resigned from the party in November 2009 in protest over its failure to protest the armaments programs of the federal government. She noted in her letter of resignation that the party was blocking her from another run as a federal NDP candidate.3

The Canadian Peace Alliance launched a “Peace and Prosperity, Not War and Austerity” education and lobbying campaign at its national convention held in Toronto October 14 to 16. It asks Canadians to send a written message to elected representatives that concludes,

“We, the undersigned, believe that money earmarked for military spending must be reallocated to social and environmental programs: to protect jobs and pensions, preserve public health care and education, and create a green economy. Furthermore, we oppose any attempts by the government to expand Canadian militarism abroad or to entrench it in Canadian society.” •