What Greece’s Creditors Should Know

In his recent article in Le Monde (31 May 2015), Greece’s PM, Alexis Tsipras, said that if Greece were to implement the (failed) austerity policy of technocrats and bankers, then there would be no need to have elections in Greece, and indeed in any country following austerity programmes. He outlines two competing strategies that tend to shape current European politics: one that promotes unification and solidarity across the continent, and another that fights for division and separation.

Here, we take his thoughts a step further by suggesting what Greece’s creditors should know in case the technocrats prevail in the current negotiations. Syriza’s Greece cannot and will not default on its people by stopping paying wages and pensions. If matters come to a head, it will default on its creditors because this is a matter of democracy and democratic principles are not negotiable.

Greece managed to make a recent payment of €750-million to the IMF by way of drawing down a special account Greece held at the fund. But early in June, a further payment of €300-million to the IMF is required, although the fund said that this can be met at the end of the month, allowing negotiators to strike a deal. It is almost impossible for Greece to meet further obligations to her creditors, given the fact that the most recent
payments became possible after Greece’s central government forced local authorities and public organizations to commit their reserves to servicing the country’s debt. 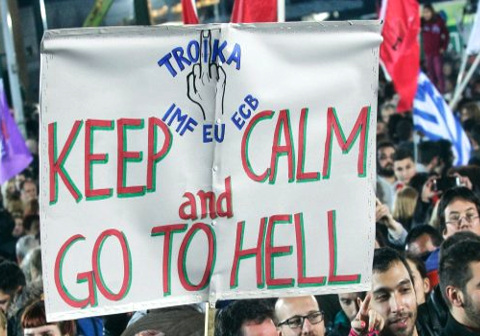 Redemptions of €6.7-billion, which are held by the ECB and which have to be met in July and August are impossible to be paid. Since last October, the decline in bank deposits has been steady and the banking system kept operating thanks to emergency liquidity assistance (ELA) provided by the
ECB via Greece’s central bank. This is approved on a weekly basis by the ECB’s governing council on the basis of a two-third majority and it can be cut-off at any point. Total bank deposits in Greece fell from €145-billion in March to €139.4-billion in April. Business and household deposits shrank by 3.5% to €133.6-billion. Growth shrank by 0.5% in the last quarter of 2014 and a further 0.2% in the first quarter of 2015.

The European Commission had forecast growth of 2.9% in November. Just before the Troika (ECB, IMF and the EU, now euphemistically called “institutions”) imposed the first bail-out deal in 2010-11, the debt/GDP ratio stood at 118%. Today, after five years of untold austerity measures it stands at 174%. The same goes for official unemployment. In 2010 unemployment stood at 9%. Today it is as high as 26%, with youth unemployment at 57%. This all speaks volumes of the failure of Brussels and Berlin to bridge the gap between centre and periphery in Europe via austerity programmes and fiscal discipline, which are recipes that the previous centre-right cabinets slavishly implemented in Greece from 2010 onwards.

Policy-making teams and analysts are good in maths and econometrics and know how to deal with financial complexities, every-day risk management and the bureaucratic detail. Power lies in Berlin and this makes Germany’s technocrats in Brussels very powerful. Greece, the technocrats argue, has borrowed large amounts of money and it is now time to pay (although they forget to add that the lenders knew that Greece would not be in a position to pay back at the moment when they kept lending money to her for decades – but that is another story). Thus, in terms of policy, the technocrats/lenders can force ‘solutions’ on weak periphery actors. Moreover, technocrats are great in designing policy models and making (unashamedly wrong) predictions.

But those technocrats and policy-makers are not independent agents. They are influenced by power-politics and the interests of the strongest power in the EU – Germany. They are indeed entrapped in a German-led anti-inflation, export-led monetarist bias, according to which the European economy is, or
should be, a system of interlocking markets in a timeless equilibrium alongside fiscal discipline and fixed exchange rates regimes. And in the unlikely event
that a crisis creeps in, then more fiscal discipline and austerity is asked to rectify imbalances. Fiscal disobedience is punishable and any injection of demand-led Keynesian economics is not permissible.

As a response to the financial crisis and the Euro-zone crisis, Berlin, via Brussels, has now adopted the so-called “European Semester” policy in which the national
budgets of the Euro-zone are closely monitored before they are authorized by the Commission to go for approval by the respective parliaments. This policy
has effectively been imposed on candidate states as well, such as the non-EU Western Balkan states, most of which have their currencies pegged to the Euro. Formal national sovereignty in the EU and beyond is a thing of the past.

Uneven Development Across the Euro-Zone

These are very worrying signals. As a plethora of writers has shown, including Martin Wolf of the Financial Times, the Euro-zone crisis is not a fiscal crisis. As such it does not, primarily, require budgetary discipline and the European Semester policy is bound to fail,
creating more poverty and hardship across the continent and not just in the periphery. The Euro-zone crisis is first and foremost a balance of payments crisis structured alongside the current account of EU member-states, and especially those states which are members of the Euro-zone.

This is the result of the unevenness across the Euro-zone in terms of the degree of industrial development, innovation and financial power that each European country can amass. Basically, it tells us that Germany and Greece cannot have the same currency, unless the former functions as an empire and the latter as a colony. It also tells us that another fixed exchange rates regime is destined to fail, the same way as all previous systems failed in modern history, beginning with the Gold Standard of the nineteenth century to the collapse of Bretton Woods in 1971 and beyond.

Things in Europe might have been different if Berlin was Washington DC and the EU was United States of Europe. It could have then been possible to somewhat balance out market and developmental disequilibria via a unified European fiscal system, recycling social surpluses from the centre to the periphery without the mediation of the banking system and usurious interest rates requiring unusual austerity policies.

Still, however, the problem of the periphery could remain unresolved, the same way as the problem of the Italian south is unresolved
after more than 160 years of Italian unification. Uneven development is a structural feature of capitalism that cannot be cured with fiscal transfers from the core to the periphery. Uneven development can be transcended only by a new social system in which extraction of profit and state power do not constitute the raison d’être of that system but an expiring, secondary and socially intolerant function of it.

This is what democratic socialism is all about. Europe – the birthplace of socialism as Eric Hobsbawm and Donald Sassoon have so eloquently argued – is not yet ready for that. With the monetarist forces in charge across the continent, it seems that the most feasible perspective is not the unification
of the peoples of Europe in view of attaining democratic socialism, but the separation of peoples of Europe in order to unite them in a new European, socialist perspective. This is neither a dream nor a nationalist platform. In fact, this is perhaps the only way today to defeat the rising xenophobia and
right-wing authoritarianism in Europe, which is the direct result of rampant monetarism and free market fundamentalism, failing to generate wage growth and social prosperity.

The tendency of “separating the Europeans in order to unite them” is real and emanates from the current Euro-zone crisis. The process of European integration created insuperable financial disequilibria, boosting structurally such disintegrative tendencies that are impossible to be cured politically at
the European level, especially if the prevailing forces in Europe are pro-monetarist.

The experiment of Syriza in negotiating its moderate Keynesian programme with Greece’s creditors in order to achieve better bail-out terms speaks volumes about the structural rigidity of the monetary union, which makes it impossible to be reformed from within. What, then, should Greece’s creditors know?

A Matter of Democracy

On 25 January 2015, Syriza came to power with a clear mandate and on the basis of a moderate left platform that many Keynesians, let alone Marxists, had fiercely criticized. There is nothing radical or extreme in Syriza’s pre-election programme announced in Salonica in September 2014. Even calls to “disengage from NATO” were dropped. Andreas Papandreou’s PASOK in the 1980s, not to speak of its super-radical period in the 1970s, were far more dangerous for capitalism than Syriza are today.

What is the problem and why can Euro-zone officials not accept Syriza’s moderate reform proposals, especially with regards to pension, wages and elementary protection of labour markets?

The problem, as insinuated earlier, is the rigidity of the European Monetary System which is governed by a set of monetarist rules, such as the
anti-inflation bias and the budgetary discipline that should prevail across the Euro-zone. Any form of wage growth is prohibited and social programmes should be dismantled.

Therefore, it is clear, as the article of the Greek PM has perceptively shown that the clash between Greece and Europe is a matter of democracy.
The Greek government entered negotiations on the basis of a clear popular mandate (currently its negotiating efforts are supported by 70 per cent of the Greek
people), whereas European officials and negotiators are the mouthpieces of unelected bankers and technocrats bound by set monetarist principles. They know that if they succumb to the democratic will of the Greek people, then a new road opens for European politics and economics, that of social solidarity, social programmes and wage growth.

But it is unlikely that they will succumb. In this case, they should know that Syriza’s Greece cannot default on its people by stopping the payment of wages and pensions; it will not default on them because this is a matter of democracy and the democratic principle is not negotiable.

It should also be noted that such a perspective will inflict far more serious damages to European and global capitalism than one is eager, or possible, to discern and recognize today. Hic Rhodus, hic salta! •

This article first published on the Open Democracy website.

Vassilis K. Fouskas is the Director of the Centre for the Study of States, Markets and People (STAMP) at the Royal Docks Business School, University of East London, the founding Editor of the Journal of Balkan and Near Eastern Studies (Routledge, quarterly since 1998) and the author (with Constantine Dimoulas) of Greece, Financialization and the EU. The Political Economy of Debt and Destruction (Palgrave, 2013).