This Election will Not End the Impasse of Canadian Democracy

By a margin of 171 to 133, the united parliamentary forces of the Conservatives, Bloc Quebecois and New Democratic Party felled the federal Liberal Government of Paul Martin at 7:09 pm of November 28 on a motion which simply read “This House has lost confidence in the government.” Thus the 38th Parliament of Canada ended. On January 23, 2006 the peoples of Canada will vote for a new government. Watching MP’s stand and vote ‘yea’ or ‘nay’ was somehow moving. Witnessing a government going down to defeat puts one, however inadvertently and ideologically distanced, in touch with history. But it is too often the history of those who have power and wield it toward their own ends. The latest national opinion polls point to the likelihood of another Liberal minority government. It seems we will be watching the final voting returns in January to see what happens in British Columbia for the precise constitution of party representation. Much else in Canadian politics will remain, we all recognize sadly in advance, all too much the same.

The moving and inspiring lines which conclude Woody Guthrie’s “The Ballad of Tom Joad” speak to what is strikingly absent from Canadian political debate and action today. Guthrie wrote: 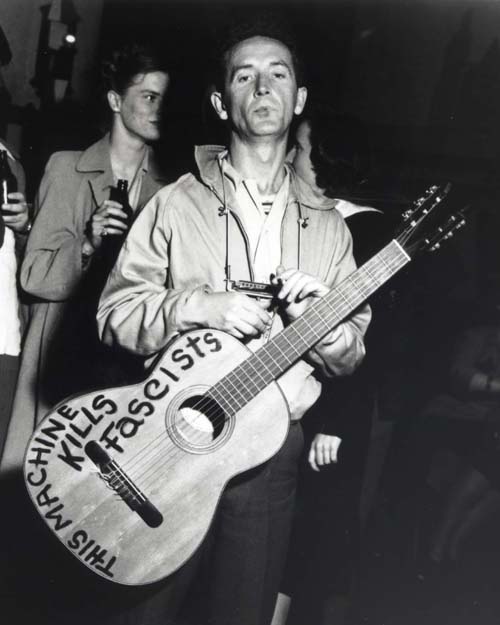 It’s a song of courage and resistance at an ever so human a scale. And here again, seventy years removed from that great economic horror of the Depression, working people, their families, their communities still are, and will be, bruised, battered and beaten unless there is a concerted resistance. When Guthrie penned these lines workers were mobilizing and pushing back, and their political allies, both social democrats and socialists, were reliable stalwarts in the class battles. As we move into another election it is again painfully clear how much must be rebuilt on the Left – politically, organizationally, and culturally.

The defeat of the Martin Liberal government has again revealed all the old dilemmas and the stark setting that is neoliberal times. The balance of electoral forces is the same stalemate that it has been for more than a decade (and much longer if one looks at the longer term impasse on the national questions and elected governments adventuring outside the boundaries neoliberal policies). The Liberals will be difficult to dislodge, not because they are popular, but because they are the party of the ‘lesser evil’ in the minds of a large plurality and command a national electoral presence practically on that basis alone. This ‘national’ presence for the Liberals is further distorted by the single-member plurality-system which systematically allows the Liberals to claim proportionately more seats than their popular vote. The BQ and Conservatives, under the well-tread leaderships of Gilles Duceppe and Stephen Harper, possess regional strengths at opposite ends of the country; while the NDP, under the (post-) modernizing leadership of Jack Layton, has pockets of support scattered here and there. British Columbia may be the exception at this point, with three of the parties contesting the province. In the cases of all the parties, their current programmes make for a distinctive embrace – or compromise with – neoliberalism. This is what, it needs to be said, national electoral calculation in Canada has come to: the Liberals as the natural governing party by fear, by accident, by lack of an alternative, but not by positive mandate.

The initiating reason why the Martin Liberal government should not have continued on (or still should have for some) is not the substantive issues of this election. The Gomery Inquiry findings on fraudulent expenses in Quebec to support ‘national unity’ certainly indicated the basic bankruptcy of federalist forces in dealing with the ‘national question’. The government deserved to fall on this basis alone for the rot at the centre of the Canadian state was again revealed for all to see. And the ‘adscam’ was certainly an offence to working people inside and outside Quebec who earn their dollars the old fashioned way – through labour. The circus that has been Ottawa over the last numbers of months as the scandal daily ebbed and flowed added to the sense of parliamentary alienation from what is happening in the daily lives of Canadian workers. This is the stark reality that in the months and years to come the attack on living standards of workers by the rulers of Canada, those on the governing benches in Parliament as well as those in the corporate offices across the country, will no doubt continue. The billions being promised over the last few weeks for aboriginal poverty reduction programs, tax cuts, an aerospace strategy, labour market training and adjustment, health care and so on is such a mixed bag that one is left wondering if there is anyone in Ottawa who engages in any kind of medium to long-term thinking, planning and prioritizing any more. Like most Liberal election promises over the last years, except for the tax cuts most of these will come to nought.

There are indeed more than a few issues to be dealt with. For one, pensions needs to be assured, as 25 years of restructuring, layoffs and the poor quality of new jobs has put at risk the retirement incomes of many workers. The same period of public sector shrinkage has severely damaged public infrastructure, access to public goods and services, redistributional programmes, the quality of work in the public sector, and the capacity of the state to transcend, or at least contain, some of the worst contradictions produced by capitalist markets. The abuse of the EI fund by turning it into a slush fund for a whole manner of things including national debt reduction, while taking income away from unemployed workers, needs attention. The growing poverty among children, in the suburban high-rises holding recent migrants and the marginalized, and in the Northern reserves across the country, is shocking. And there is, of course, the entire disaster that is Canada’s international trade policy from NAFTA to the WTO and the lead role that Canada is playing in further attempting to constitutionalize corporate property rights and neoliberal principles in trade agreements (notably in the WTO Doha round ministerial meeting next month in Hong Kong).

The Canadian state has been re-made precisely to limit democratic access, control and capacity-building, and to expand its role in strengthening private property rights, expanding the market and shrinking the state, and fostering the internationalization of both Canadian and foreign capital. Over the past quarter century governments of every hue, national, provincial and local, have participated, in varying degrees, in reinventing Canada as a good place to do business. By necessity, this has also meant workers accepting lower standards of living and expecting less in the way of public services. We keep getting neoliberalism even when we think we are throwing the last bunch of neoliberals and their policies out. Hence the democratic impasse that exists in Canada: falling voter participation rates, especially among working class people, and deepening alienation from the political process.

Whatever happens on election night will have little consequence for the many issues that are of real and concrete importance to Canadian workers. None of the political parties, including the NDP, are addressing these issues (although the discourse around healthcare may be in part an exception). New Democrats, in their efforts to recreate themselves as the ‘authentic’ liberal party beyond the old political antagonisms that are in the way of new social partnerships, are leaving workers and unions to the side, and even re-tacking party positions on ‘law and order’ and Canada’s military stance. As a small symbolic example, not so long ago, New Democrat politicians walked on picket lines and mobilized their memberships in anti-war rallies and against Canadian imperialist interventions, such as in Haiti. They don’t like doing that anymore. It is not what a modernizing party, creating a new market-friendly civic politics and appealing to the corporate mass media, is about.

What does all this imply for the Left in the coming election? In a wider political sense, it points to the need to rebuild the resources of hope and struggle necessary to defend the popular classes and marginalized and to advance an alternative to capitalism. In more immediate electoral terms, it is to try to ensure another minority Parliament with more progressive voices than the last and fewer arch neoliberal ones. This is to vote for the NDP in English Canada and the BQ in Quebec. In some ridings, however, where the NDP is a negligible presence there is a case to be made for a vote for the Liberals to keep out a reactionary conservative. The choices all around are baleful. But there also needs to be some clear principles, something rare in Canadian politics these days, and a number of concrete issues that the Left needs to work on raising during the election to the extent we are able.

On constitutional issues, the rights to self-determination for Quebec and, at last, settlement of issues of national determination, land claims, constitutional status for First Nations are principles to be clear about. Another is that the coming Parliament address the long-standing demand for reform of the electoral system, and development of a system of proportional representation, something that the existing parties are more frequently making noises about, but letting slide depending upon their individual electoral calculations. On international affairs, it needs to be insisted that Canada withdraw troops immediately from the Middle East, allow refuge for war resistors from the US, and butt-out of the affairs of Haiti. These interventionist adventures have been imperialist disasters that the Canadian state needs to be held accountable for.

That the madness of privatization of pensions, the healthcare system, water supplies and energy sources, schools and universities be stopped is something that a wide set of social forces should be gathered around in the election campaign. And it should be insisted that Canada implement and advance the Kyoto principles rather than beat a retreat from its international treaty obligations – the Liberal Party’s operating principle par excellence – at every opportune moment. In other words, the election should become a moment of political resistance and capacity building of the Left, not one more instance of accommodation, and wishing the NDP into being something they are not and no longer even want to become.

We need a million Joad’s on the streets and 308 in Parliament. Failing that, let’s continue to build political alternatives as best as we can. And not forget to enjoy the holidays. By the way, those stakes to hold up your lawn sign, they’re great for growing tomatoes, so take one from every party that offers (just don’t put the sign up) and get your local conservative campaign to drive you to the poll on election day … even if it’s only a block away. •