The GM Layoffs and the Logic of Neoliberalism

The perverse logic of neoliberalism took even more twisted turns on 21 November 2005. General Motors, the largest manufacturing company in the world, had just months ago been promised $450-million in government money to create jobs in Canada. Leaving aside the questionable merits of that subsidy – and there are many questions – GM has announced that that it would in fact cut 3,600 from its Canadian operations – about 20% of its workforce in Canada. Common-sense might have suggested that the legitimacy of that deal would now be questioned. But common-sense no longer pertains in the world of neoliberalism. Challenging the subsidy was a no-no among politicians, editorial writers, reporters and – so far – even the union. 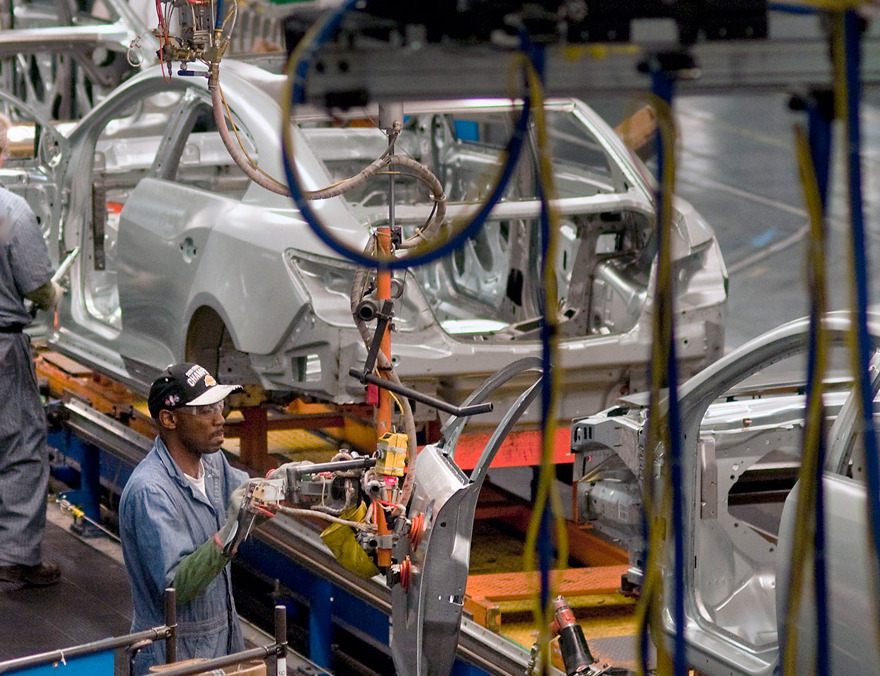 What is happening at GM is more than a matter of greed. The crisis is real enough: GM’s market share has certainly been plummeting. But it would be pretty hard to argue that workers caused the problems. Workers did not choose the models to be made; they are not responsible for the American health care system which has disadvantaged GM and Ford, with their older workforces, relative to Toyota and Honda; they work as hard as workers at other companies (all of whom have been pushed to work ever faster and harder); and they did not design the irrational capitalist system that is based on constantly creating excess capacity, a problem capitalism then fixes through the competitive ‘restructuring’ of workers lives and communities. And even when the excess capacity falls, renewed competition leads to new rounds of excess capacity and the cycle of destruction repeating itself.

But if workers are not to blame for GM’s troubles, they sure are the ones who will pay for them. That the latest layoffs in the U.S. and Canada – 30,000 overall – were generally expected makes them no less devastating. The 3,600 Canadian layoffs is a shock since it was only a few weeks ago that the CAW expressed relief that it had managed to limit GM to ‘only’ reducing its Canadian workforce by less than half that number. Moreover, the actual job losses over the next three years may be even higher since the new announcements seem to be largely on top of the original 1,700, which were to come not from closures but from ‘efficiencies’. And the announced layoffs exclude the spin-off effects on parts and suppliers across the continent (add those in and the total workers directly affected will be close to 100,000 with about 12,000 of these in Canada).

The new Canadian layoffs will essentially occur in the two Oshawa car plants. Plant #1 will lose 1,000 jobs as it drops from three shifts to two, and Plant #2 will lose 2,300 through a projected closing in 2008. Here’s where things get a little strange even in terms of capitalist logic. GM is preaching the need to improve productivity, satisfy customers’ demands for quality, and cut costs as it especially laments the absence of a sensible health care system in the USA. So what is its solution? Close or remove shifts from the two plants that are ranked at the very top of all its plants in terms of productivity and quality and whose costs are some $20,000 (U.S.) lower per worker than U.S. plants because of the advantage of the lower Canadian dollar and socialized healthcare costs. In terms of quality, Plant #2 – the plant scheduled for closing – is ranked first not just within the GM chain but in all of North America, with Plant #1 being second. As for productivity, Plant #2 is ranked 4th overall and 2nd within GM while Plant #1 is ranked first amongst all North American plants.

This obviously makes no economic sense, but it makes sense in terms of the larger labour relations picture in the US. In the best of times, it would be ‘politically’ difficult for GM to announce the closure of five plants in North America and not include any Canadian plants. But with GM having won concessions from the UAW, and looking to gain UAW cooperation in making even deeper cuts in wages and health care, it would be all the more difficult to imagine GM going to the UAW after exempting Canada from closures. At one level, this leaves room for some optimism for Canadian workers: if this is just tactics for the moment, than GM may perhaps find a way to restore its Oshawa operations once the UAW is ‘settled’. (Of course, by 2008 things may get still worse.)

All of this is not the end of one story, but the beginning of another. The latest layoffs will not solve GM’s overall problems. While excess capacity will be sharply reduced, uncertainty over GM’s future models continues, and the issue of pension – and especially health care – costs will not go away (and may even get worse as the number of retirees per active worker will rise even higher). It will therefore not be surprising to see GM return to the UAW with a demand for another contract re-opener and additional concessions even before this contract expires in the fall of 2007. They will be hard pressed to do so in Canada because of both the existence of socialized health care costs and the recent commitment of the CAW to fight concessions. Yet Canadian workers can not help but be worried – the Detroit River is only so wide.

In struggling with what union militants might do in this context, it seems important to note the following:

We need to be honest about how difficult the above challenges really are. There will be an understandable attempt on the part of unions and workers to survive as best they can and hope something will change down the road. Part of this may be to lower expectations in light of the fact that ‘we are living in new times’. But that is precisely the point – the times are new and after the experiences of the past quarter century, the lesson that screams out at us is that we need is to raise and broaden our expectations and above all start thinking about how we develop our collective capacity to fight back. Organizing cannot be an ‘objective’: it has to be a cause and part of rebuilding the working class as a relevant social force. Opposing free trade can’t be a politically correct policy; defeating it is part of challenging the legitimacy of property rights over democratic rights and a precondition for winning a measure of security, equality, and community. Demands for decent work can’t be left to markets or made dependent on ‘competitiveness’ and bribing corporations with concessions or incentives; participating and sharing in collective labour is a matter of individual dignity and of developing and using all the potentials of society.

Workers in earlier times rose to the occasion when past answers didn’t work and surprised not just others but themselves with their organizational capacities and creativity. This same challenge now applies to the present generation. Surely the failed promises of neoliberalism leave more than enough openings on which to build? The choices today do seem limited. But if working people and trade union leaders are incapable of transforming their unions to inject a heightened mobilization and radical creativity, the available options will only shrink further
tomorrow. •

Letters to the Editor: Public ownership way to protect jobs

For years now, workers have been told that efficiency and productivity gains are the only way for them to keep their jobs. International markets, we are told, are extremely competitive for business, so workers must also be more competitive. Across North America this has meant contracting out jobs and, of course, reduced wages for the same work, and concessions bargaining for unions.

Moreover, unions have been pressured to enter into partnerships with employers to help manage workplace restructuring. To a large degree the unions have been “tamed”. This year’s round of negotiations between the Canadian Auto Workers Union and the big three auto manufacturers is a testament to this.

Yet, the argument that concessions and competitiveness will save jobs was shown to be a farce this week when General Motors announced it would eliminate, directly, 3,660 jobs. What makes the lie of competitiveness more apparent is that “one of the top-ranked auto plants in the western hemisphere – Oshawa’s Number 2 assembly plant” is on the chopping block. When the job losses at GM are compounded by 15,000 job losses in assembly plants we can see that the “new economy” simply does not work for workers.

And still, Canadian governments plan on negotiating $435-million in public aid to a corporation that has shown no commitment to Canadians. We give constantly and what do we get in return: reduced wages, longer workdays, pink slips and the chance to work at Wal-Mart. There has got to be another way.

First, we need to stop subsidizing business. If there is going to be public investment, there should be a public ownership stake in the corporation. There is no other way to make sure jobs are protected and communities sustained.

Second, unions (and workers in general) should abandon concession bargaining. It hurts in the short term, and does little if anything to save jobs in the long term. This, of course, is not an easy strategy for unions. But unless unions organize a fight-back (which would also necessitate a major campaign to organize new workers into unions) and a political strategy to reduce the competitive pressures on workers, there is no way to prevent GM-style job losses.

GM’s statement on healthcare can be found in their 2004 Annual Report, p.8. It can be downloaded at:
www.gm.com/company/investor_information/docs/fin_data/gm04ar/download/gm04ar.pdf.

Reference to the above rankings of Oshawa plants can be found at: www.gm.com/company/gmability/workplace/100_news/120_news/oshawa_051905.html.