Well, well. It seems the Ontario budget had a surplus last year. This is pretty surprising. Just last month, on August 9, provincial Finance Minister Peter Bethlenfalvy tabled the 2022-23 Ontario budget. In that document, he estimated that the deficit for 2021-22, the fiscal year that ended in March, would be $13.5-billion. Instead, we found out Friday the province had a surplus last year of $2.1-billion. In other words, the minister’s estimate was off by over $15-billion.

The main reason for the change? Provincial revenues surged last year. According to the Public Accounts, last year’s revenues topped $185-billion, $31-billion more than budgeted way back in March 2021. Revenues rose for a number of reasons.

First, multi-year federal supports to Ontario (totalling an estimated $145-billion) put a solid foundation under the provincial economy. Second, the government spent less than budgeted, by $3-billion. Third, inflation began to rise right after the budget was tabled. When prices rise, revenues rise as well. 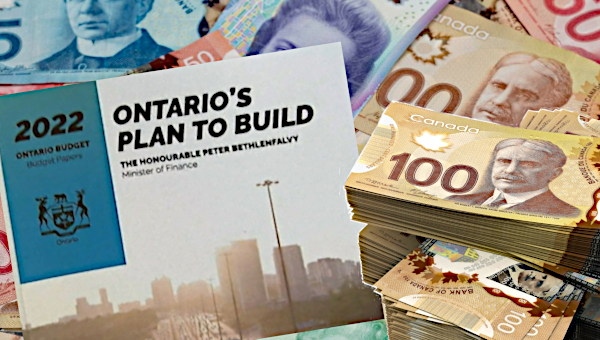 To be clear, few forecasters back then were predicting higher inflation. The 2021 budget predicted Ontario’s inflation rate would be absolutely normal – 1.7% in 2021 and 2% in 2022 and after.

All of that is understandable. Forecasts are frequently wrong: there are no facts about the future. What is not understandable is that the minister of finance did not report, in August, that the 2021-22 deficit was actually going to be much, much less than $13.5-billion.

By August 9 of this year, the 2021-22 fiscal year had been over for 100 days and production of the Public Accounts was well underway. Did the minister not know that last year’s deficit estimate bore no relation to reality? If he did know, why didn’t he report it? Why didn’t he deliver an updated budget with more accurate numbers?

If these were just numbers, none of this would matter. But repeatedly painting Ontario’s financial picture as much bleaker than it actually is can only feed a false narrative that says Queen’s Park can’t afford to solve the province’s pressing problems.

This has no basis in fact. With the economy growing much faster than the debt, Ontario’s fiscal picture improved last year and is improving this year. Queen’s Park could run a deficit of $10-billion – or more – and the picture would still be improving. With all the pressing problems Ontarians are facing, the government should have been spending, not pinching pennies.

Last year, education spending came in at $1.4-billion less than budgeted, even though it’s obvious that we need billions in new spending to help school kids bounce back from the pandemic.

This summer, we saw emergency rooms close across the province, a clear sign the province had failed to make the necessary investments to support healthcare workers and the system as a whole.

Meanwhile, food bank usage has gone through the roof as Ontarians scraping by on social assistance see what little money they have for groceries devoured by inflation. The government’s response has been to increase Ontario Disability Support payments by less than the rate of inflation and leave Ontario Works recipients exactly where they were – in deep poverty.

In this present crisis, Ontarians need help. What they’ve seen instead is deception. For a finance minister who prides himself on transparency and accountability, it’s not a good look. •