Brazilian Elections: The Challenges in the Second Round

The general elections underway in Brazil have very different political consequences than the previous ones. In a politically polarized country, the outcome of the polls will decide between two opposing alternatives: Brazilian democracy or the advance of a neo-fascist power project.

One week after the first round, now that tensions have eased, it is possible to start drawing up an assessment of the outcomes and offer insights into future scenarios. In this light, we can examine the challenges to former President Lula’s campaign for the second round. 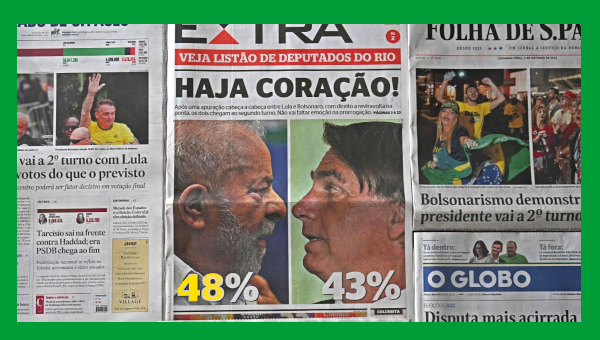 The results of the first round of the presidential elections, on 2 October, offer contradictory impressions, oscillating between perceptions of optimism and pessimism. This includes the disappointment of the centre-left with the pre-election opinion polls, which pointed to the possibility of Lula’s victory in the first round (if he obtained more votes than all the other candidates together; Lula eventually fell short by 1.5%). This disappointment was compounded by the hope that the disastrous conduct of Bolsonaro’s government regarding management of the pandemic would result in his defeat at the polls.

From an optimistic point of view, in absolute numbers, Lula was the presidential candidate with the largest number of votes in Brazilian history, and he was also ahead in the proportional count, with a strong prospect of victory in the second round.

In the election for Congress, the number of PT (the Brazilian Workers’ Party, led by Lula) members in the Chamber of Deputies increased from 56 to 68 (out of 513). There were also unprecedented victories for candidates from progressive social movements. For example, three Federal Deputies and four State Deputies are closely linked to the MST (Brazil’s Landless Workers Movement, closely aligned with the PT), and two Federal Deputies were elected by the MTST (the Homeless Workers’ Movement), among them Guilherme Boulos, the congressman with the most votes in the State of São Paulo. The election of the first black trans woman and indigenous women to the House of Representatives is also significant for the representativeness of the Chamber of Deputies.

At the same time, however, the far-right candidate, current President Jair Bolsonaro, surprisingly, and contradicting the opinion polls, reached 43% of the valid votes (excluding abstentions and spoiled ballots), even after four years of a government marked by gross corruption scandals, economic crisis, growing poverty and, above all, its disastrous management of the Covid-19 pandemic, which resulted in almost 700,000 deaths in Brazil. Bolsonaro’s campaign reflected the tone of his government, with neo-fascist tendencies, scientific denialism, fake news, and the complete absence of a positive agenda.

In addition, the newly elected Congress is even more conservative than the previous one, especially the Senate, with at least 40% of the seats being taken by supporters of the current government, including 14 senators from the PL (Liberal Party), among them, Damares Alves (former Minister of Human Rights) and Sérgio Moro (former Minister of Justice and judge against Lula in the so-called Lava Jato operation). In the Chamber of Deputies, PP (Progressives Party), PL, União Brasil, and Republicans (all parties largely aligned with Bolsonaro) took nearly half the seats.

This suggests two possible scenarios, depending on the results of the second round. If Lula wins, his administration is likely to be pulled even more strongly towards the centre-right, with significant concessions being needed to secure governability. Alternatively, if Bolsonaro wins, there will be an intensification of the neo-fascist agenda, with ample support in Congress, which might facilitate the approval of neo-fascist reforms such as the expansion of the number of seats on the Supreme Court, a regressive tax reform, and the allocation of resources to allies through the fiscal budget. We can also expect major setbacks in women’s rights, with even deeper cuts in the budget for policies regarding gender violence, for example, as well as obstacles to any initiatives supporting sexual and reproductive rights.

The first scenario, although not ideal in view of the challenges Lula will face to governability, is incomparably more promising for the left than the second. The opinion polls suggest that it is likely that Lula will be elected in the second round. Until then, however, both candidates will face significant challenges.

While Bolsonaro’s campaign will have to seek dialogue with women voters, a segment of society in which he is widely rejected, Lula will seek votes from sectors of the middle class, as well as establish a dialogue with neo-Pentecostal voters, who largely support Bolsonaro.

First, there is a widespread perception that both campaigns were empty of content and mobilization, and focused especially on carrying out battles on social media. For the left, it is essential to add specific popular commitments to Lula’s programme, pushing a distributive and democratic agenda for his government in dialogue with mass organizations and mass movements. This would contrast heavily with Bolsonaro’s campaign, which has been notable for the spread of fake news, violence, and a fascist project of deconstruction of democracy.

Secondly, Lula’s campaign will probably face difficulties in establishing a dialogue with voters who chose Ciro Gomes, Simone Tebet, abstention, or who spoiled their ballots. In this sense, Lula has been engaged to establish alliances with the two main losing candidates. Lula incorporated into his programme the proposal from PDT (Brazilian Labor Party) candidate Ciro Gomes to renegotiate workers’ debts. In the same direction, Lula assimilated all the proposals for his government program recommended by Simone Tebet, the third-placed candidate in the first round of elections from MDB (Brazilian Democratic Movement). In addition, there is the challenge of mobilizing the 20.9% of voters who did not vote in the first round, the highest abstention rate since 1998.

From the point of view of the left, there is no doubt that Bolsonaro must be defeated on 30 October. However, Bolsonarism, the mass movement that has elected and flourished under the current president, will remain influential in Congress, state and municipal executives and legislatures, and among the ultra-conservative, racist, and misogynist contingent in Brazilian society. For the poor majority of the population, it is certain that the next four years will be a period of continuous struggle, requiring organization to protect social and political rights, a campaign to revoke the ceiling on fiscal spending imposed by Constitution Amendment 95/2016, and pressure for investment in education, health, and other areas of public provision. The confrontation against the conservative order being imposed under Bolsonaro must start from a critique and rejection of the economic policies of his government. •