How should we remember Queen Elizabeth II and her 70 years on the British throne? It’s perhaps better to consider after the media parade about her funeral is in the rearview mirror.

A number of people have reacted to the glorification of her rule, pointing out the British Royals’ direct connection to the slave trade, Britain’s colonial massacres, mass famines and its loot from the colonies. Britain’s wealth – $45 trillion at current prices from India alone – was built on the blood and sweat of people who lost their land and homes and are today poor countries. Lest we forget, the slave trade was a monopoly of the British throne: first, as the Company of Royal Adventurers Trading into Africa in 1660, later converted to the Royal African Company of England. The battle over “free trade” fought by British merchant capital was against this highly lucrative Royal monopoly so that they could participate in it as well: enslaving people in Africa and selling them to plantations in the Americas and the Caribbean.

According to western legends of the European Age of Discovery, co-terminus with Enlightenment, was what started it all in the 16th century. Explorers such as Vasco de Gama, Columbus, and Magellan went across the world, discovering new lands. The Enlightenment led to the development of reason and science, the basis of the industrial revolution in England. The Industrial Revolution then reached Europe and the United States, creating the difference between the wealthy West and the poverty-stricken rest. Slavery, genocide, land expropriation from “natives” and colonial loot do not enter this sanitized picture of the development of capitalism. Or, if mentioned, only as marginal to the larger story of the rise of the west. 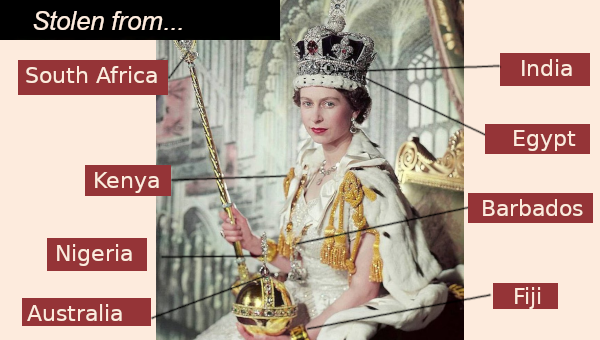 Actual history is quite different. Chronologically, the Industrial Revolution takes place in the second half of the 18th century. The 16th-17th centuries is when a small handful of western countries reached the Americas, followed by the genocide of its indigenous population and enslaving of the rest. The 16th-17th centuries also see the rise of the slave trade from Africa to the Caribbean and the Americas. It destroys African society and its economy, what Walter Rodney calls How Europe Undeveloped Africa. The plantation economy – based on slavery in the Caribbean and Continental America – created large-scale commodity production and global markets.

While sugar, the product of the plantations, was the first global commodity, it was followed by tobacco, coffee and coca, and later cotton. While the plantation economy provided commodities for the world market, let us not forget that slaves were still the most important “commodity”. The slave trade was the major source of European – British, French, Dutch, Spanish and Portuguese – capital. Gerald Horne writes, “The enslaved, a peculiar form of capital encased in labor, represented simultaneously the barbarism of the emerging capitalism, along with its productive force” (The Apocalypse of Settler Colonialism, Monthly Review, April 1, 2018).

Marx characterized it as so-called Primitive Accumulation and as “expropriation,” not accumulation. Capital from the beginning was based on expropriation – robbery, plunder and enslaving of people by the use of force; there was no accumulation in this process. As Marx writes, capital was born “dripping from head to foot, from every pore, with blood and dirt.”

The British Royals played a key role in this history of slavery and the so-called primitive accumulation. Britain was a second-class power at the beginning of the 17th century. Britain’s transformation was initially based on the slave trade and, later, the sugar plantations in the Caribbean. Its ships and traders emerged as the major power in the slave trade and, by the 1680s, held three-fourths of this “market” in human beings. Out of this, the Royal African Company, owned by the British Crown, held a 90% share: the charge for Britain’s domination of the slave trade was led by the British Royals.

Interestingly, the slogan of “free trade,” under which slogan the World Trade Organization (WTO) was created, was the British merchant capital wanting the abolition of the Royal Monopoly over slave trade. It was, in other words, the freedom of capital to enslave human beings and trade in them, free of the royal monopoly. It is this capital, created out of slave trade and outright piracy and loot, that funded the industrial revolution.

While slavery was finally abolished, in Britain it was not the slaves but the slave owners that were paid compensation for losing their “property.” The amount paid in 1833 was 40% of its national budget, and since it was paid by borrowings, the UK citizens paid off this “loan” only in 2015. For the people of India, there is another part to the story. As the ex-slaves refused to work on the plantations they had served as slaves, they were replaced by indentured labor from India.

To go back to the British Royalty. The Crown’s property and portfolio investments are currently worth £28-billion, making King Charles III one of the richest persons in the UK. Charles III personal property itself is more than a billion pounds. Even by today’s standards of obscene personal wealth, these are big numbers, particularly as its income is virtually tax-free. The royals are also exempt from death duties.

In the three hundred years of the history of British colonialism, brutal wars, genocide, slavery, and expropriation were carried out in its name and under its leadership. After the industrial revolution, Britain wanted only raw materials from its colonies and not any industrial products: the slogan was “not even a nail from the colonies.” All trade from the colonies to other countries had to pass through Britain and pay taxes there before being re-exported. The complement of the industrial revolution in Britain was de-industrializing its colonies, confining them to be a producer of raw materials and agricultural products.

Why are we talking about Britain’s colonial past on the occasion of the death of Queen Elizabeth II? After all, she only saw the last 70 years when the British colonial empire was liquidated. This is not simply about the past, but that neither the British Crown nor its rulers have ever expressed any guilt over the brutality of its empire, and its foundation based on slavery and genocide. No apology for the empire’s gory history: not even for the massacres and mass incarcerations that took place. In Jallianawala Bagh, which Elizabeth II visited in 1997, she called the massacre a “distressing episode” and a “difficult episode”; not even a simple “We are sorry.” Prince Phillip even questioned the number of martyrs.

How do we reconcile the anger that people who suffered from Britain’s colonial empire feel about their leaders making a bee-line to pay homage to the Queen? Does it not shame the memory of those who laid down their lives in the freedom struggle against the British Crown that India lowered the national flag to half-mast to honor the Queen?

One can argue that this happened long before Elizabeth II took over the Crown, and we cannot hold her personally responsible for Britain’s colonial history. We should: she as Queen represented the British state: it is not Elizabeth, the person that people want an apology from, but the titular head of the British state. That is why Mukoma Wa Ngugi, the son of Kenya’s world-renowned writer Ngugi wa Thiong’o said, “If the queen had apologized for slavery, colonialism and neocolonialism and urged the crown to offer reparations for the millions of lives taken in her/their names, then perhaps I would do the human thing and feel bad,” he wrote. “As a Kenyan, I feel nothing. This theater is absurd.”

Mukoma Ngugi was referring to the Mau Mau revolt for land and freedom in which thousands of Kenyans were massacred, and 1.5 million were held in brutal concentration camps. This was 1952-1960; Queen Elizabeth II came to the throne in 1952, very much in her lifetime! •