How Young Workers Are Unionizing Starbucks

At only 19 years old, Joe Thompson is one of the youngest lead organizers with Starbucks Workers United (SWU), the umbrella organization at the forefront of one of the most exciting labor successes of the last few years. Thompson, who started working at the coffee chain at age 16, told me in a recent interview, “Starbucks likes to claim it’s super-progressive, and a lot of workers there are, but we’re the ones actually holding Starbucks accountable to that standard.”

The very first Starbucks location to successfully unionize was in Buffalo, New York, where a vote was held only last December. Since then, dozens more locations have voted to join SWU – whose parent company is Workers United, an affiliate of SEIU – and more than 200 other locations have filed for union elections.

Thompson, who uses they/them pronouns, and who describes their background as “working-class Hispanic,” lives in Santa Cruz, California, and works there as a shift supervisor at the first Starbucks in the state to petition for a union. That vote is expected to take place in May, and it will be a bellwether for union organizing at Starbucks cafés across California. 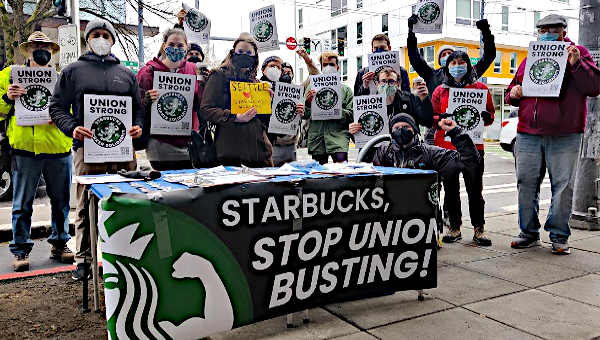 The nation’s most populous state has lagged behind New York, Virginia, Massachusetts and Arizona on unionizing efforts at Starbucks primarily because, as per Thompson, California “does have better working conditions than a lot of other states.” The statewide minimum wage in California is $15 an hour, which is more than twice the federal minimum wage. Thompson also cites “better workplace protections” in California compared to other states.

The lesson here for anti-union forces is that poor wages and working conditions can prompt union activity. Unions are needed precisely because pro-corporate politicians have resisted raising the minimum wage and have weakened labor rights for decades.

Additionally, workers at California’s Starbucks locations “wanted to see what Buffalo could accomplish” before petitioning for a union, said Thompson. “After watching them win their vote, then we really started to organize.”

It’s no wonder that Starbucks worked so hard to stop organizers from successfully unionizing in Buffalo, flying in external managers and holding captive-audience meetings with CEO and founder Howard Schultz. The company was rightfully worried about the domino effect of a successful union vote triggering similar efforts elsewhere.

It seems as though the standard anti-union corporate playbook may have reached its limit as workers across the United States are seeing the benefits of labor organizing in the face of undignified work, meager pay, unpredictable hours, little to no benefits and few rights.

One of the most effective corporate anti-union tactics has been to disparage unions for charging fees (monthly or annual dues) to finance their protection of workers. Indeed, union dues were the entire basis of the Republican-led effort to pass so-called “right-to-work” laws in states around the country. It was also the central theme around which the online retail giant Amazon discouraged workers from organizing, saying instead that they could “do it without dues.” 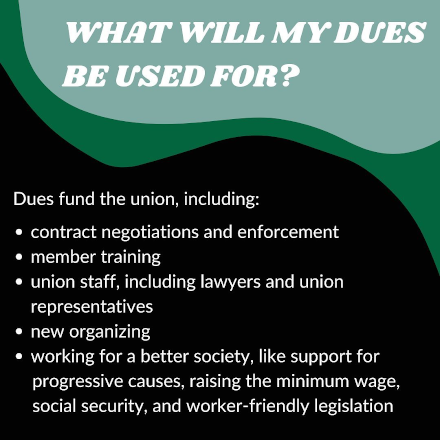 But this tactic failed in the face of SWU’s organizing. “Before a union goes public, we’re inoculating our organizers,” said Thompson. “We’re telling them, ‘here’s exactly what Starbucks is going to say; here’s why it’s wrong’.” The union uses creative graphics via social media to explain how union dues are a perfectly reasonable price for collective bargaining rights that yield better working conditions. “We’re using Discord and other technology really to get workers engaged and to keep them there,” said Thompson.

The union’s overall messaging is savvy and effective, and it remains one step ahead of the company. For example, Starbucks refers to its employees not as workers but as “partners,” a slick PR term that implies a level playing field with the boss. But, weaponizing this wordplay against the company, SWU counters that only through the power of a union can workers truly be partners with their employer. “Partners becoming partners” has become a central theme of its organizing strategy.

Another aspect of the successful unionizing streak that may have caught Starbucks off guard is that most workers are relatively young and extremely cognizant of the social and political conditions under which they have come of age. “They’re all young people who are growing up during the Bernie Sanders era,” said Thompson. The same fearmongering against unions that may have worked with older Americans appears not to be working against these younger workers.

“We’re recognizing that we have power together, and young people are so fed up with not only their workplaces… but with a lot of other things too,” said Thompson. Among those things is the existential threat of climate change. “Being young right now, we don’t have a solid future ahead of us,” said Thompson, who volunteered for Sanders’ presidential campaigns in 2016 and 2020, and said that their fellow Starbucks workers are “asking ourselves, what are we going to do to stand up and fight back against these corporations that are not only polluting the earth but also not paying us a living wage?”

“The simplest answer is to unionize,” said Thompson.

It is simple. And that elegant idea is a countervailing force to corporate power that businesses like Starbucks have been dreading since their inception. The company is already facing a lawsuit from the National Labor Relations Board for illegally retaliating against workers over their union organizing activity.

So overt is the company’s anti-union position that CEO Schultz recently announced that he was considering new benefits for workers, but only for those who did not join the union.

Thompson said, “that is clear union-related retaliation against organizing; it’s unlawful.” If Schultz goes through with such a step, Thompson promises that SWU will sue the company for unfair labor practices. “He is a bully… disconnected from his workers,” said Thompson of Schultz.

Although the Starbucks unionizing efforts have been wildly successful over a short period of time, voting to join a union is only the first – and easiest – step. The hard part comes during contract talks where the nuts and bolts of workers’ demands will be negotiated.

For example, Starbucks’ baristas are tipped workers and those whose wages do not have to meet minimum wage standards because they are expected to earn tips to compensate, resulting in the possibility of taking home appallingly low paychecks. But the company still refuses to allow customers to pay tips via credit card – a major issue that workers plan on raising during contract negotiations.

Given the geographic diversity of the company’s locations, contract negotiations could be unique to each state and even café. Thompson explained that in California where they are based, the union’s statewide organizing committee is currently putting together “an action plan” of the sort of contract that workers in the state want to negotiate, including the specific type of benefits they need.

That plan will form the floor of a contract that each unionized store in California will start from in their negotiations with Starbucks, adding on demands specific to each store as needed. Thompson’s Santa Cruz-based café, for example, will be including a demand for a security guard on its premises.

Not content with helping to lead a historic union organizing movement, Thompson is also running for office for a seat on the California State Assembly representing District 28 and is the youngest person to do so. Their campaign website says, “Joe knows what it’s like to not know when you’re gonna be able to eat your next meal and how it feels to be left behind by a system that allows for the rich to get vastly richer while the rest of us continue hard work for starvation wages.”

“Anyone can unionize,” said Thompson, who remains optimistic even in the face of multiple dire crises facing young people like them. “Young workers are recognizing that we need to do something to protect ourselves and to fight for our values… The world we are living in is falling apart. And we can change that.” •