The United Nations, Amnesty International and Human Rights Watch have indisputably documented that Israel has been committing war crimes and large-scale human rights violations in both annexed and occupied territories, and have further recognized that Palestinians are living under an oppressive Israeli apartheid system that is designated by the United Nations as a crime against humanity. 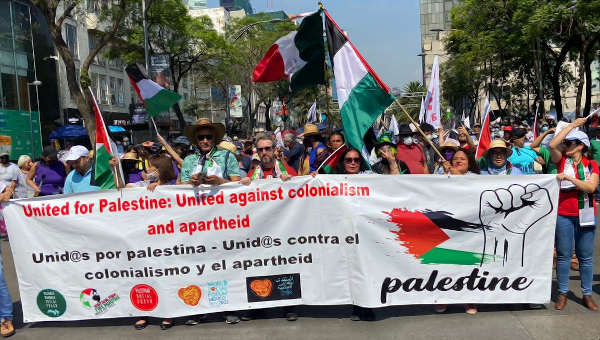 By transferring more than 700,000 Israeli Jews into these 300 illegal colonial settlements, Israel is violating Article 49 of the Geneva Convention and is committing a war crime according to the International Criminal Court which is investigating Israel’s war actions in the occupied territories. This population transfer also shows that Israel’s objective is keeping these territories permanently occupied, and either de jure or de facto annexed.

Canada’s Foreign Enlistment Act makes it illegal to induce or recruit for a foreign military and Canada Revenue Agency guidelines state that “supporting the armed forces of another country is not” a charitable activity. Yet, according to 2017 statistics from the Israeli army, 230 Canadians served in the Israeli military, with periods of service usually lasting around two years, and some registered Canadian charities support the Israeli army.

Currently, the Israeli occupation regime continues to detain 4,450 Palestinians, including 32 female prisoners, 160 children, and 530 administrative detainees are held without charge or trial.

So far this month in annexed East Jerusalem, more than 200 Palestinians have been wounded by police shootings and drones and more than 500 have been arrested; and the sanctity of and access to Muslim and Christian holy sites, the Al Aksa Mosque and the Church of the Holy Sepulchre, have been violated during Ramadan and Easter.

Canada was quick in imposing sanctions on Russia when it occupied and annexed Crimea in 2014 by banning the import, purchase or acquisition of goods from the region or from any person in that region. Canada did the same thing with respect to the on-going Russian occupation of the territories of Donetsk and Luhansk in Eastern Ukraine this year.

Successive Liberal, Conservative and Progressive Conservative governments have affirmed that Israeli settlements in the occupied territories are illegal.

While Canada was quick to impose sanctions on Russia when it annexed Crimea in 2014, it has not taken any action since Israel annexed East Jerusalem and the Golan Heights of Syria in 1980 and 1981 respectively.

While Canada recognizes that Israeli settlements are illegal, it still does business with them. The Canada-Israel Free Trade Agreement (CIFTA) that was renegotiated in September 2018 permits goods and services from illegal Israeli colonial settlements to enter the Canadian market tariff free.

Amnesty International and Human Rights Watch have also affirmed that states have an obligation to ban imports from illegal settlements.

By continuing to trade with illegal Israeli colonial settlements, allowing Canadians to serve in the Israeli army and allowing tax deductible donations to be sent to the Israeli army, Canada is knowingly assisting apartheid Israel’s war crimes and the violation of Palestinians’ and Syrians’ human rights and fundamental freedoms, including their religious freedom.

Trade with illegal colonial settlements should not be taking place at all. The fact that it does take place means Canada is violating its international law obligations and reflects a double standard when compared to Canada’s prompt reaction to Russia’s occupation and annexation in Ukraine.

Khaled Mouammar is a Christian Palestinian Canadian who was forced to flee his hometown Nazareth in 1948. He is one of the founders of the Canadian Arab Federation and a former member of the Immigration and Refugee Board of Canada.