On April 3rd, citing a “foreign conspiracy” to unseat him and to avoid an impending vote of no confidence, cricketer-turned-politician and Pakistan’s Prime Minister Imran Khan dissolved the National Assembly. On April 7th, the dissolution was over-turned and declared unconstitutional by the Supreme Court. On April 9th, after desperate attempts to cling onto power (including by threatening to precipitate martial law), Khan was voted out by the reconstituted parliament. Khan’s core middle-class base, however, remains firmly with him – through every move, thick or thin, legal or illegal, even happily cheering on the self-dissolution of their own government on April 3rd. Here, Ayyaz Mallick traces the roots of today’s right-wing populisms and (proto-)fascisms in commodity fetishism. 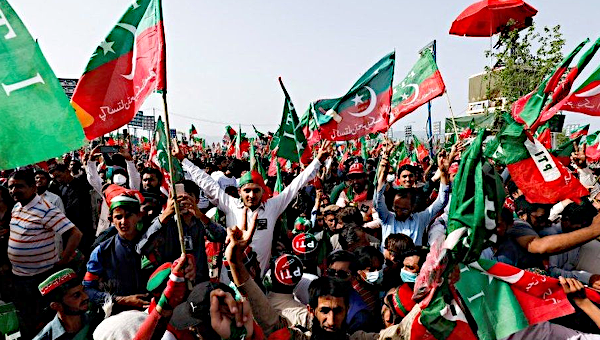 Imran Khan is a fetish. He is a fetish in the precise sense that Karl Marx talked about in his explication of the “fetishism of commodities.” The commodity, as Marx reminds us, is a strange thing: a creation of labour and sensuous human activity but one which rules over the same as a demi-god unmoored from its social and historical basis. Indeed, in the society of exchange and profit, the commodity takes on what Marx calls a “supra-sensual” and “supra-societal objectivity” – whereby, even while being an object itself, the commodity takes on the characteristics of a subject. In short, an inversion is enacted: object (commodity, market, price) becomes subject, while subject (human beings, labour, etc.) becomes object – thus producing the paradox and real illusion of capitalist ideology.

Indeed, where Khan has taken on, at least in the eyes of his supporters, an almost supra-societal objectivity, one which renders him beyond the messiness of social life and able to pronounce judgement on loyalty and treason, morality and corruption, good and evil, he embodies exactly the same kind of seeming independence, the same fetish that the commodity embodies. Bonapartism and populism are regularly seen as phenomena where “outsiders” shake up an irredeemable, morass-ridden politics and thus enact a titular independence from the norms of amicable conduct and conflict. However, the seeming “independence” of such individuals, the “stickiness” of their popular acclaim, must also be rooted in the fetishistic workings of commodity society.

Here, Georg Lukacs’s observations on the commodity as a form of social being (and not just consciousness) are an important starting point. Specifically, Lukacs’s explication of the “antinomies of bourgeois thought” and the latter’s polarized view of history – oscillating between the masses as passive and inert versus the “great man” view of history – helps place the strongman temptation in its fetishistic context. By reducing (human) subjects to objects and thereby turning society into a reified thing beyond human intervention, the other polarity takes on a concrete possibility of its own, i.e., of “great men” who can stand above history and society itself, Teflon characters whose appeal no demonstration of hypocrisy and narcissism, no evidence of their own myriad falsehoods and corruptions can dent. In short, these are the reified subjects of a reified world.

The erasure of historicity and depth enacted by the commodity is another meeting point with the phenomenon of our own aspiring Bonapartes. The commodity enacts a closure of historicity by dint of its everydayness, through mundane acts of buying, selling, and exchange, the constant repetition of its own workings. Its self-satisfaction is one of confinement to the surface-level of society’s workings, one which erases its own history of exploitation, blood, and sweat to enact a constant repetition of the present. All surface, no depth, and the erasure of memory and, indeed, of historicity itself.

Imran Khan’s discourse of “corruption” and a Trump-ian promise of “draining the swamp” enacts a similar depthlessness – a discourse which, we should not forget, is rooted in the “good governance” prescriptions of international finance institutions (IFIs such as IMF, World Bank, etc.). It is no coincidence that such a discourse of “corruption” is linked firmly to the surface-level, marketised view of society which has long been peddled by IFIs and the neoclassical mainstream and has little to do with the structural iniquities of capital and imperialism. It is no coincidence either that Imran Khan’s core base consists of exactly the same social groups and classes strongly linked to the post-liberalisation economy of Pakistan, one predicated on a bonanza of hyper-commodification and conspicuous consumption.

Thus, where the market hides its own brutal origins and present, enacting an erasure of historicity and depth, it is no wonder that neither Imran Khan nor his support base can get to grips with either the complexity of Pakistan’s society or political economy, beyond a perfunctory and fetishistic discourse of corruption. History and memory thus sequestered, structure and struggle thus erased, we are left to wallow in the eternal orgasm of the present. An endless invocation of 1992 (when Pakistan won the cricket world cup under Khan’s captaincy), the tiresome repetition of cricket metaphors, standing in for any serious grappling with the realities of polity and economy in Pakistan – the accidents and achievements of sport and spectacle turning politics itself into sport and spectacle.

We arrive, as such, at a supra-societal, fetishistic objectivity for which any norms of conduct or process, any consideration of the social and its discontents, any compulsions of constitutional ambits and social contracts may be damned. This unmooring of the person from his surroundings, this disinterring of the political from the social, is, of course, an index of the wider crisis we find ourselves in the midst of, one where extant vehicles of representation have decayed to an extent that a grotesque mediocrity can hover above all the arrayed forces of (dis)order, and present himself as avatar of goodness, morality, and indeed, as tribune of the people itself.

As the supra-societal commodity enacts an erasure of its own origins in blood and gore, it too becomes an empty container – a vehicle and expression of our deepest fears and most cherished desires. The fetish of Imran Khan is thus not just the ghost which hovers above society, but also one that is a mirror for everyone’s image of themselves. Vehicle for Islamic renewal one day, exemplar of sexual prowess the next,1 here is the commodity and its Janus-faced avatar (the populist) who is everything to everyone at every moment. No coincidence again that this avatar has its roots in one of the high religions of commodity society: the hyper-commodified and sexualized spectacle of international sport.

The Commodity, Consumption and Worship

It is, of course, Walter Benjamin, that great thinker and victim of the degenerate society of the spectacle (i.e., fascism), who once characterised capitalism as a religion – one whose priests are advertisers, whose god is money, whose temples are shopping arcades, and whose salvation is the commodity. Crucially, Benjamin is at pains to emphasise, capitalism is no ordinary religion. It is, in fact, a religion without expiation. Here, there is no forgiveness, no ritual of prayer and confession, to rescue the sins of the believer. No, the believer must consume continually, worship constantly at the altar of the commodity, only to find that she always falls short. The commodity demands not just flesh and blood, but soul and emotion; ultimately, it transforms life itself, a constant churning over of memory, the past, present, and future.

It is no surprise, then, that the fetish of Imran Khan breeds its own religion without expiation. He represents a social group in a permanent state of mobilisation, engaged in an ongoing debasement of all that is sacral and secular, enacting repeated rounds of a hysterical unitarianism in the name of God and country. A permanent fascination with the celebrity of Khan, constant affirmation of loyalty to his person and vitality, repeated partaking in his spectacle of twitter hashtags and mass rallies, parallels the compulsive consumption fostered by the society of the commodity. Addiction, after all, is the ultimate structure of the commodity itself – no society being as addictive, as invested in repeated affirmation of its vitality and viability, as embroiled in a permanent state of jouissance, as is late capitalism itself.

With its addictive impulses, the utopian promise of commodity society cannot be ignored. For by at least promising to sweep away encrusted hierarchies of status, caste, and tribe, etc., capitalism and its commodity society offers its own form of democratisation, one mediated through cultures of consumption, the market, and its regime of formal equality. That such utopian impulses are displaced and incorporated by commodity society in a debased form goes without saying: freedom becomes freedom to consume, equality devoid of difference becomes the equality of indifference, and choice becomes the choice to choose your own exploiter (often not even that).

It is this debased inclusion, this plebian democratisation, the displacement of agency and hope into the figure of a Teflon man, the simultaneous negation and affirmation of hierarchy, that marks also the utopian promise and dissimulations offered by figures like Khan. While embodying dreams of inclusion and immediate unity in the figure of “the People,” such a construction of the People via the “great man” preys on the emptying out of subject-hood and agency by commodity society. Unmediated unities being primed for filling up with exclusionary content along the lines of ethnicity, religion, etc., it is no wonder that populist politics is more a friend of the Right than it can ever be for the Left.

Here, too – in a parallel to the commodity fetish – we find that the democratisation and mobilisation is indeed of a very surface level: what Sartre once called a “manipulated seriality,” an active passiveness, loud but acquiescent, mobilised but dependent, hateful to those below and grateful to those above. Like cognate right-populist upsurges around the world, Khan’s too find its most forceful expression through the spectacular world of social media. Social media and its machinery of images are prime vehicles for a politics of plebian democratisation, one which thrives on depthlessness and erasure of historicity, a tendency toward fascistic expression built within the medium itself. The Right, as Benjamin again reminds us, thrives on lack of context; the Left withers at its altar.

In this mooring of contemporary populisms in commodity culture, there is a salutary warning too. The first, of course, is that however much the commodity (and the populist) might unmoor themselves from their roots, detach themselves from the compulsions of the social, they are embedded in the very same society and its history. Thus, ultimately, the logic of the social, its inequalities and interests, asserts itself beyond the pantomimes of rhetorical freedom and independence – whether through the dull compulsions of capital or its state and institutions. No matter how much the populist temptation may present itself, there is no escaping the building of a coherent project, anchored in alternative hegemonic apparatuses, i.e., of a genuinely “national-popular” historical bloc with its own integral practice of social and economic transformation.

More importantly, the commodity, its detachment and its spectacle, are unthinkable without the role of existing dominant groups. By this we mean the reigning classes and their political-economic formations whose machinations and enclosures lay the ground for the emergence of the commodity, its society of spectacle, and its personification in the (proto-)fascist and populist. In short, all purveyors of “democratic values” and “civilian supremacy” could do much worse than look at their own feet of clay – their subjective conceits and objective failings having tilled the soil for tinpot mediocrities to nurture their own hateful trees.

The populist, after all, is both expression and promoter of contemporary morbidities, high priest of the religion of exchange and consumption: unmoored from the social, unaccountable to anyone but their own Id, and willing to risk the end of life, limb, and the world rather than to submit one’s self to the latter’s compulsions. An Imran Khan lives inside each one of us – an always latent possibility in the society of commodity and spectacle. •

Ayyaz Mallick is a university lecturer, with research interests in Marxist and anti-/post-colonial theory.