The War in Ukraine: Truth is the Whole

Two maxims come to mind as I sit to write about the war in Ukraine: ‘Truth is in the whole’ and ‘Truth is the first victim of war.’

The picture from the Canadian government and the major western media is one of a deranged Russian dictator who has invaded a neighbouring democratic country that wants only to be part of our peace-loving alliance of democratic states. This is a patently false picture that prevents us from developing an informed position.

A particular difficulty in this case, however, is that even the most frugal presentation of ‘the whole’ would require more than a thick volume.1 Consequently, this article will be limited to the most essential elements needed for an enlightened position, elements that are largely missing from the dominant narrative. 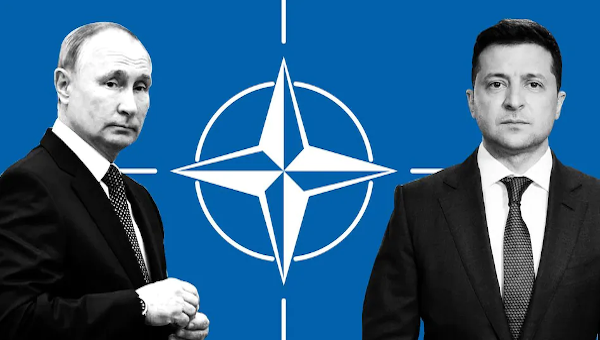 This said, I begin with the strongest unconditional condemnation of the Russian government for this war. It is a war of choice, and thus, a criminal undertaking. There is evidence that only a narrow circle of the top political élite was involved in the decision for a full-scale invasion, one which surprised people even relatively close to the government. Certainly, Russia’s state-controlled media did nothing to prepare the public.

It also seems clear that the war will turn out to have been a grave mistake for the regime. So far at least, it has not moved either Kiev or NATO to negotiate seriously. At the same time, effective Russian control of Ukraine – which is what Moscow’s declared goal of ‘denazification’ (to be explained presently) would require – hardly seems possible. An Afghanistan-type quagmire could well result, given the presence inside and outside of the Ukrainian armed forces of highly motivated neo-fascist elements.

That stated, this article’s goal is to provide, to the degree possible in such limited space, necessary contextual elements missing from Canadian official and major-media accounts. Along with Russia, these elements will show that NATO and the Ukrainian government share a heavy responsibility for the war.

After all, NATO had been predicting the war for weeks, decrying Russia’s troop concentrations on the border with Ukraine. Yet neither NATO nor Kiev would pronounce the words that would certainly have averted war: Ukraine will not become a member of NATO. Even today, as war rages, instead of pressing Kiev to negotiate on the basis of that pledge, NATO remains cynically resolved to defend Ukraine… to the last Ukrainian, as it pours in arms and facilitates the entry of right-wing mercenaries. This is the height of criminal cynicism.

Russia made clear on March 7 its condition for ending the military operation: Kiev has to amend its constitution to reject membership in any military bloc, to recognize Crimea as part of Russia, and the Donetsk and Lugansk regions as independent states. One can evaluate the offer as one likes, but, however repugnant and unjust it must certainly appear to Kiev’s government, it is an invitation to accept a reality that Kiev cannot change, and by so doing, to stop the war. In return, the government would survive, saving many lives and much valuable infrastructure that so poor a country – the poorest country in Europe – cannot afford to waste.

It is unlikely, however, that Kiev, egged on by NATO, will accept. After all, in the months leading to the war, it rejected a very reasonable solution that was open to it: Austrian-type neutrality for Ukraine. Even worse, only a few days before the invasion, Ukraine’s president declared that if Ukraine is not admitted to NATO, he would consider pulling out of the 1994 Budapest memorandum, by which Ukraine gave up its nuclear weapons. One is hard pressed to imagine a statement better designed to stoke Moscow’s already intense security concerns. And Putin mentioned it in his speech on the eve of the war: “Now they are also claiming the right to own nuclear weapons. We will not allow them to do this.”

Russia’s war is most fundamentally about these security concerns, and not about Putin’s purported nostalgia for the USSR or for the Russian empire or any desire to defend the linguistic and cultural rights of Ukraine’s large Russophone population, rights that are shockingly violated by the regime in Kiev, which is only marginally more democratic than Moscow’s. The present conflict is definitely not a confrontation between a democracy and an authoritarian regime, as portrayed by NATO’s politicians and our servile media.

Already in the 1990s, when the Russian government was practically – and quite willingly – under US colonial rule, political actors from across the spectrum expressed their strong opposition to NATO’s enlargement, which violated the American commitment given to Gorbachev, the last Soviet leader, not to expand NATO, in return for which Gorbachev agreed to German reunification and a united NATO membership for Germany. NATO’s illegal bombing of Serbia, a traditional Russian ally, in 1999, only intensified Moscow’s alarm.

William Burns, present Director of the CIA and former ambassador to Russia, wrote from Moscow in 2008 to Secretary of State Rice: “Ukrainian entry into NATO is the brightest of all red lines for the Russian elite (not just Putin). In more than two and a half years of conversations with key Russian players, from knuckle-draggers in the dark recesses of the Kremlin to Putin’s sharpest liberal critics, I have yet to find anyone who views Ukraine in NATO as anything other than a direct challenge to Russian interests…”2 The US military interventions in Serbia 1999, Afghanistan 2001, and Libya 2011 were all conducted under Article 4 of the NATO charter, although the alliance claims to be purely defensive.

And it is not only NATO’s expansion that alarms Moscow, for it has been accompanied by the American exit from key arms control treaties: in 2001, the Anti-Ballistic Missile Treaty, cornerstone of arms control for the previously twenty years; in 2019, the Intermediate Nuclear Forces Treaty, accompanied by installation in Eastern Europe of short-range rocket artillery capable of carrying nuclear warheads (Ukraine has a 1200 km. border with Russia; NATO warheads could reach Moscow in twelve minutes); and, in 2020, the Open Skies Treaty that permitted reconnaissance flights over signatories’ territories to verify compliance and increase mutual trust. One can see that Moscow has grounds for concern.

Another element of the picture is the insurgency in east Ukraine, typically reduced by Western media to ‘Russian aggression’. Russia did, indeed, support the breakaway region. And this February 21, it officially recognized the independence of the two provinces in which the insurgent regions are located. But the eight-year conflict was, in fact, a civil war, albeit with foreign intervention on both sides. It began when insurgents in Donbass refused to accept the violent overthrow of Ukraine’s democratically elected government in February 2014. In response, the newly-formed government in Kiev, backed by the US and Canada, immediately declared an ‘anti-terrorist operation’, sending troops against the dissidents, whom Russia soon stepped in to support.

The easterners had reason to resist, as the coup had been spearheaded by armed neo-fascist units, whose ideology – ferociously anti-Russian, including hostility to the Russian language and historical memory – was well represented in the new government. At that time, Russian speakers made up almost half of Ukraine’s population. Neo-fascists, some trained by Canada, have since been prominent in the fighting in the east, which has taken some 14,000 lives over the past eight years, mostly civilians on the insurgent side. As of March 6, shelling of Donbass villages from the Kiev side of the demarcation line was still going on.

The neo-fascists have infiltrated Ukraine’s armed forces and police, culminating last November in the appointment of Dm. Yarosh, a leading neo-fascist figure, as adviser to the Commander-in-Chief of the Armed Forces.

In 2014-15, Kiev negotiated the Minsk Accords with the eastern insurgents under the auspices of France and Germany. The accords were aimed at resolving the conflict, among other things, by granting the eastern provinces a measure of autonomy. But opposition from the neo-fascists prevented their implementation. Meanwhile, the government eliminated Russian as a language of instruction at all education levels, severely restricted Russian-language media, outlawed Ukraine’s communist parties, arrested prominent figures sympathetic to Russia, and energetically propagated the anti-Russian neo-fascist version of Ukraine’s history.

In April 2019, Zelensky, running against a hawkish incumbent on a peace platform, received 73.2% of the vote. But he immediately faced severe opposition, led by neo-fascist elements, which included unveiled threats to his life. A month after the elections, Yarosh publicly stated that “if Zelensky betrays Ukraine, he will lose not only his position but his life.” It took only a few brief months for Zelensky to abandon any effort to breathe life into the Minsk accords and to espouse the bellicose positions of his defeated opponent.

Elimination of the ultra-nationalist, neo-fascist influence is what Putin meant in his speech of the eve the war when he called for ‘denazification’ of Ukraine. That is a condition for ensuring that Ukraine remains out of NATO, as well as a demand for the security of the residents of Donetsk and Lugansk, regions recognized as independent states by Russia on February 15 and for the protection of the cultural and linguistic rights of Ukraine’s Russophone population.

Most of this article was devoted to the responsibility of NATO and of Kiev in this war, since it has been completely obfuscated by our government and major media. Still, however much Moscow was incited to war, it took the decision, and so, it bears the heaviest responsibility. That clearly stated, however, Canada, by egging Kiev on in a war that it cannot possibly win rather than pressing NATO to declare that it will never accept Ukraine into its ranks, bears a very heavy burden of responsibility. As Canadians, we share it, if we remain silent about our government’s responsibility for this war and fail to oppose NATO expansion and arming of Ukraine. •