As Indians continue to scramble for survival through a deadly second COVID-19 wave and deal with an inadequate healthcare system that has failed them at every step, for a majority of the country living in rural areas and in slums in urban centers, food insecurity is proving to be a bigger struggle than protecting themselves against the deadly virus.

In one of Asia’s largest slums, Dharavi, Mumbai, putting food on the table is proving to be a pressing challenge for the population of about one million living in one of the most densely populated areas in the world. “Hunger is a major problem,” says Nawneet Ranjan, founder of the nonprofit Dharavi Diary (Gyanodaya Foundation), who has been working in Dharavi for the last several years. “In the last six or seven years that I have worked here, I have never seen anything like this,” he says, referring to the helplessness being felt by the marginalized sections of India’s societies who have been facing increasing food insecurity, especially during the second wave. “Food is a bigger priority than sickness,” he explains. He has recently started a crowdfunding effort to provide the residents of Dharavi with food supplies, especially the most vulnerable sections like single mothers, the elderly and the transgender population. 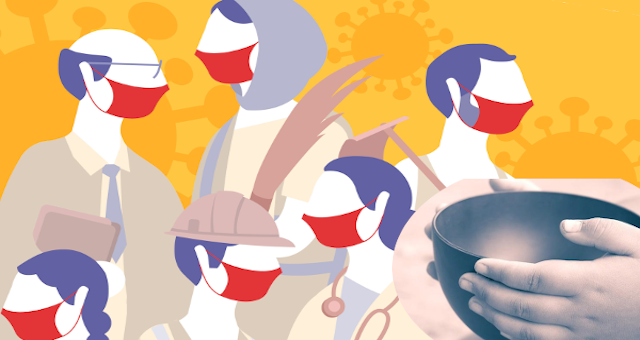 During the second week of May, India recorded more than 400,000 daily infections and more than 4,000 deaths, surpassing earlier records, and has overtaken Brazil as having the second-largest number of COVID-19 cases in the world (after the United States of America).

In the Global Hunger Index 2020 report, India’s hunger crisis was considered “serious.” India was in the 94th position among 107 countries ranked for their management of hunger; “[t]he situation is grim and the country is battling widespread hunger,” an October 2020 Down to Earth article reported.

A study by the Azim Premji University’s Center for Sustainable Employment released on May 5 estimated that “[t]he first wave of the COVID-19 pandemic shoved a staggering 230 million (23 crore) Indians below the poverty line,” states an article in Business Today.

As with the case of the healthcare system in India, those facing hunger have had to largely depend on nonprofits or citizen efforts, which have come forward to provide food, medical supplies and other help for those already struggling to make ends meet before the pandemic.

“People have lost jobs again. During the first wave of the pandemic in India, people from the slums went back to their villages. But there were no work opportunities there, so they came back to cities once things became better,” says Ranjan. The number of COVID-19 cases had started to subside by December 2020, at the end of India’s first wave. “They came back, and the second wave hit a few months later, and this time it was worse because they had already sold everything they had during the first wave,” he adds. During the first wave, thousands of people who were employed in the informal sector, such as domestic workers, drivers, cooks or factory workers, were caught unawares as the BJP-led government of Prime Minister Narendra Modi announced one of the harshest lockdowns with short notice, leaving them completely unprepared. This led to the “exodus” of people who were left with no other choice but to walk thousands of kilometers in an attempt to reach their homes in rural parts of India.

“There is no testing here. The disease is spreading rapidly, but there is no acknowledgment among the people that they might be affected by the virus. They don’t want to go to government hospitals, so they avoid getting tested. Unlike the first wave, they can’t even go back to rural areas as the virus has spread there also,” says Ranjan.

According to Ranjan, besides avoiding getting tested, there is also resistance to getting vaccinated and a lack of knowledge about how to book vaccination appointments. “[Some people] either don’t want to get vaccinated or don’t know how to since they don’t have access to the internet to book appointments.”

The situation is far worse in rural areas where there are next to no healthcare facilities.

While the central government has been criticized for the lack of nationwide lockdown to combat the spread of COVID-19, some state governments have imposed lockdowns – which might be helpful for public health, but for the informally employed, these have added difficulties. In the Kolhapur district of Maharashtra, people left without work can only head out and look for temporary employment before 11 a.m., since a statewide lockdown takes effect between 11 a.m. and 7 p.m. “In Kolhapur, people depend on the manufacturing industry for employment, which mainly includes the textile and automobile industry. With the lockdown in place, these factories have stopped operating and people no longer have any means to earn a living and feed themselves,” says Sanket Jain, a journalist in India who writes about rural issues and has been working in rural areas to make education more accessible to children.

Jain explains why there is sometimes resistance by this population to get tested for COVID-19. “Looking at the oxygen crisis, they are really scared and are in denial about their symptoms. They don’t have money to afford food – how will they afford oxygen cylinders?” he says.

“They are mainly surviving on certain government benefits and the food supply they are provided by nonprofits,” Jain says. “Most of them only survive on eating rice and make it last for as many meals as they can,” he adds, further pointing out that many families are down to eating one meal a day.

In both the rural areas and in urban slums, social distancing is something that people do not have the luxury to follow, and the lack of clear communication from the government about the importance of wearing masks and other safety protocols required to control the spread of the virus has contributed to its spread.

Mismanagement and Surging Hunger in Brazil

Food insecurity has worsened across the world during this pandemic as more than 155 million people faced acute food insecurity in 2020, which is a jump of 20 million people from 2019. Describing the situation for the vulnerable and “poor communities,” Oxfam International says that the message from them is clear: “[h]unger may kill us before coronavirus.”

According to the organization, “new hunger hotspots are also emerging. Middle-income countries such as India, South Africa, and Brazil are experiencing rapidly rising levels of hunger.”

The gross mismanagement of the handling of the COVID-19 situation on the ground and lack of action based on scientific data during the pandemic by Brazil, much like in India, has not only led to the loss of lives from the virus on a massive scale but has also led to food insecurity emerging as another factor people have to fight against in order to survive.

With minimal government support, hunger has crippled those who were already struggling before the pandemic in Brazil and in India. The increased unemployment – especially among those employed in the informal sector – has been one of the main factors for hunger as the virus surges unchecked in both these countries.

Brazil’s former president Dilma Rousseff has described the handling of the current COVID-19 crisis by President Jair Bolsonaro as “repulsive” and “genocidal” in a Guardian interview, further stating that this mismanagement had left the country “adrift on an ocean of hunger and disease.”

“A survey by the Brazilian Research Network on Sovereignty and Food and Nutritional Security shows that more than 116 million people are facing food insecurity. Of these, the survey says, 43 million (20.5 per cent of [the] population) do not have enough to eat and 19 million people (9 per cent) are just starving,” states an article in the Wire.

In 2020, “the director of the World Food Program’s Brazil office, Daniel Balaban, warned that Brazil was moving quickly toward returning to the world hunger map, which it left in 2014. Countries figure on that list when more than 5 per cent of their population live in extreme poverty,” states Agence France-Presse. 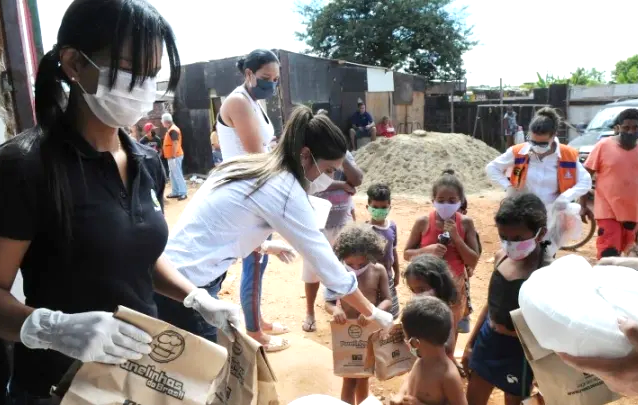 The stories of hunger in Brazil are very similar to those in India where people are struggling to survive in the face of an indifferent government. Brazil had made great strides in overcoming hunger “in the first decade of this century, when one-sixth of the population was lifted out of poverty. For many now in Rio, its return is devastating,” states a Reuters article.

A video report by Gustavo Basso for DW shows Celia Gomes talking about her struggle with feeding her four children on a daily basis. “I wake up with a feeling of being in agony. I jump out of bed and the first thing I do is thank God I am alive. I look at my children and think to myself, ‘today I will bring home some food for them.’ I leave the house early to fetch bread. There are days when I can’t manage to bring them any.” People in Brazil have also had to look to nonprofits for help to overcome hunger, much like in India.

In India, the Modi government has failed to respond to the crisis in every manner possible. Despite early warning signs of an uptick of cases, the government allowed the holding of superspreader events like the Kumbh Mela and the organizing of political rallies in several states. As the healthcare system became overwhelmed by the rising number of cases and India faced a shortage of ICU beds, oxygen supply and adequate testing, the Modi government distanced itself from the blame, instead prioritizing a parliament renovation plan over saving lives. With no end to the second wave, experts don’t see any respite for India any time soon, with a third wave already being predicted even as the country is far from managing its second wave.

Meanwhile, in Brazil, Bolsonaro faces possible impeachment over his handling of the crisis. He has referred to the COVID-19 virus as a “little flu” and continued to ignore or take inadequate measures to control the situation, in the face of rising fatalities.

With the leaders in both countries refusing to accept the urgency of the situation before them, the marginalized populations already struggling are having to fight a dual fight: against the virus and against hunger. •

Ruhi Bhasin is an assistant editor at the Independent Media Institute. Previously, she worked as an editor and a senior journalist at the Times of India and the Indian Express covering politics, legal matters, and social issues. She can be reached on Twitter @BhasinRuhi.