The pharmaceutical corporations find it far safer and more profitable to give priority to supplying the rich countries that not only can pay high prices for the vaccines but are also willing to make advance payments covering the production costs to come. This is clearly illustrated in the analysis of the distribution figures of the vaccines. Moderna has allocated 84% of its production to the US and the EU; Pfizer/BioNTech has allocated 98%, and Johnson & Johnson, 79%. Pfizer/BioNTech has delivered to Sweden alone nine times more doses than it has delivered to all the low-income countries put together.1

Mapping the vaccine doses clearly shows that part of the world is being left out. In October 2021, of the 5.76 billion doses injected, only 0.3% have gone to the lowest income countries, which have a total population of 700 million people (see: “Coronavirus (COVID-19) Vaccinations”). Only 2.7% of the populations of the 27 lowest income countries have received a vaccine jab against over 60% in North America and Western Europe.

The leaders of a handful of rich countries are opposed to lifting patents as requested by the Global South, particularly the European Union, Switzerland, and Japan. As for the USA, President Joe Biden has said he favours lifting the patents but he has not taken any action toward requiring governments that are blocking the question in the WTO to do so. 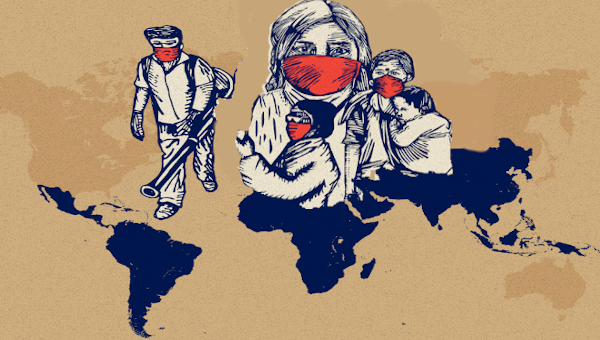 The prices asked by Big Pharma for Covid vaccines are exorbitant. Two examples: according to Public Citizen estimates, a Pfizer/BioNTech Covid vaccine dose costs about $1.20 to mass produce; a Moderna vaccine dose costs $2.85 to mass produce. In some countries, the Pfizer/BioNTech dose is sold at $23.50, and the Moderna dose is priced as high as $37. The usual excuse for such prices is the costs of R&D and clinical trials. These arguments are not valid in the case of Covid vaccines, as these costs have been financed by public authorities.

The decision by Northern governments to proceed to a third injection delights Big Pharma, which sees more fabulous profits in gestation. If the patents on vaccines, tests, and drugs are not lifted or actually abolished, the big private companies that dominate the pharmaceutical sector will reap colossal revenues for the next 20 years at the expense of the global population, state budgets, and public health systems. The stakes are enormous because booster injections will be recommended and/or imposed. Imagine an annual injection for 20 years with a vaccine protected by a patent and therefore sold at a high price… Big Pharma shareholders may gleefully anticipate huge incomes.

In a well-documented report entitled “The Inside Story of the Pfizer vaccine: ‘a once-in-an-epoch windfall,’” the Financial Times explains that, thanks to its agreement with the German company BioNTech, this US company took the lead over its competitors Moderna, Astra Zeneca, and Johnson & Johnson in the production and selling of the vaccine. Like Moderna, it gave priority to the rich countries. By the end of 2021, it has covered 80% of the Covid vaccine sales in the EU and 74% in the US. It was very demanding toward the governments of countries in the Global South, as it made changing their national laws a condition to supplying vaccines. “Before deals could be agreed, Pfizer demanded that countries change national laws to protect vaccine makers from lawsuits (…). From Lebanon to the Philippines, national governments changed laws to guarantee their supply of vaccines.”

The paper quotes Jarbas Barbosa, the assistant director of the Pan American Health Organization, who said that Pfizer’s conditions were “abusive, during a time when due to the emergency [governments] have no space to say no.”

The Financial Times further explains that “negotiations with South Africa were particularly tense. The government complained that Pfizer made what its former health minister Zweli Mkhize called ‘unreasonable demands,’ which it said delayed the delivery of vaccines.” The paper further reports that

“at one stage, [Pfizer] had asked the government to put up sovereign assets to cover the costs of any potential compensation, something it refused to do. The Treasury rejected the health department’s request to sign the deal with Pfizer, according to people familiar with the matter, arguing it was equivalent to ‘surrendering national sovereignty.’ But Pfizer did insist on indemnity against civil claims and required the government to provide finance for an indemnity fund. The South Africans said to me: ‘These guys are putting a gun to our head,’ says a senior official familiar with African vaccine procurement efforts. ‘People were screaming for a vaccine and they signed whatever was put in front of them.’”

South Africa’s Health Justice Initiative is about to file a lawsuit to enforce the publication of the contracts signed between Pfizer and the South African government.

“We want to know what else they played hardball on,” says Fatima Hassan, founder of South Africa’s Health Justice Initiative. “A private company can’t have so much power. The contract should be open. They would tell the story of what Pfizer has managed to extract out of sovereign countries around the world.”

The outrageous attitude of governments in the most industrialized capitalist countries who deliberately deepen the gap with people in low-income countries finds a telling illustration in the third jab. Up to November 2021, those governments had had a third vaccine jab administered to 120 million inhabitants in rich countries, while the total figure of vaccines administered in low-income countries only amounts to 60 million.2 This is public health apartheid.

Moreover, Amnesty International is right to denounce AstraZeneca, BioNTech, Johnson & Johnson, Moderna, Novavax, and Pfizer for those “six companies at the helm of the global Covid-19 vaccine roll-out are fuelling an unprecedented human rights crisis because of their refusal to waive intellectual property rights and share vaccine technology, with most of the companies failing to prioritise vaccine deliveries to poorer countries.”3

COVAX is Not a Solution

Governments in countries of the South who wish to give their population the possibility of getting vaccinated will have to contract debts, since COVAX-type initiatives are blatantly wanting and actually reinforce the hold of the private sector. COVAX is run jointly by three bodies: 1. The GAVI Alliance, a private structure that brings together companies and States, 2. The Coalition for Epidemic Preparedness Innovations (CEPI), another private structure that also includes capitalist companies and States, and 3. The WHO, a UN specialized agency.

The entity which co-directs COVAX is the Coalition for Epidemic Preparedness Innovations (CEPI), which was founded in 2017 at Davos on the occasion of a meeting of the World Economic Forum. Among the private companies who finance and strongly influence the CEPI we find, once again, the Bill & Melinda Gates Foundation, which has invested $460-million.

The membership of the COVAX initiative reveals much about the unwillingness of the various WHO member States to take responsibility for the struggle against the pandemic, in particular as regards public health. Such an attitude is typical of the damage done by the neoliberal groundswell that has swept the planet since the 1980s. The Secretariat General of the United Nations and the leadership of the specialized agencies within the UN system (for example, the WHO in the area of health and the FAO for agriculture and food) have been moving in the wrong direction for the past thirty to forty years by relying more and more on private initiatives directed by a limited number of big global companies. Heads of State and of government have moved in the same direction. In fact, it can even be said that they made the first move. In so doing, they have allowed major private companies to be associated in decisions and to derive advantages from the choices that are made.5

Remember that over 20 years ago, researchers and social movements that specialized in care proposed that the public authorities should invest sufficient amounts to create effective remedies and vaccines against the “new generation” viruses stemming from the increase in zoonoses. The overwhelming majority of States have chosen to rely on the private sector and have given them access to the results of research conducted by public entities, when they should have invested directly in the production of vaccines and treatments within the framework of a public health service.

As we have seen, the COVAX initiative is not the solution that is needed. COVAX had promised to supply, by the end of 2021, 2 billion doses to the countries of the South who request them and who are associated with the initiative. In reality, figures show that at the beginning of September 2021, only 243 million doses had been shipped.6 As a result, the goal of 2 billion doses has been pushed back to the first semester of 2022.

All the major powers of the North have fallen short of the promises they made. For example, on 21 October, the European Union, along with Iceland and Norway, had only delivered 52 million doses (10%) out of the 500 million they had promised.

According to an official assessment in December 2021, COVAX has so far only delivered about 600 million doses in 144 countries or territories, a far cry from the initial objective of two billion in 2021. To date, 9 doses per 100 individuals have been administered in low-income countries (as defined by the World Bank). In comparison, the world average is 104 per 100 people. This figure rises to 149 for high-income countries. Africa is the continent with the lowest rate of vaccination (18 doses for 100 inhabitants).7

C-TAP (Covid-19 Technology Access Pool) is another disappointing WHO initiative. C-TAP includes the same protagonists as COVAX. It was created to pool intellectual property, data, and fabrication processes by encouraging pharmaceutical companies who hold patents to cede to other companies the right to produce the vaccine, medicines, or treatments by facilitating technology transfer. Yet, so far, not a single vaccine producer has shared patents or know-how via C-TAP.8

Faced with the failure of COVAX and C-TAP, the signatories of the Manifesto End the system of private patents! launched by the CADTM in May 2021 are right in saying the following:

“Initiatives such as COVAX or C-TAP have failed miserably, not only because of their inadequacy, but above all because they reflect the failure of the current system of global governance in which rich countries and multinationals, often in the form of foundations, seek to reshape the world order to their liking. Philanthropy and burgeoning public-private initiatives are not the answer. They are even less so in the face of today’s global challenges in a world dominated by States and industries driven solely by market forces and seeking maximum profits.”

The signatories of the Manifesto advance eight principal demands:

Among the signatories are Noam Chomsky and Nancy Fraser from the United States, Naomi Klein from Canada, Arundhati Roy and Tithi Bhattacharya from India, Silvia Federici and Cinzia Arruza from Italy, trade union leaders, association leaders, more than eighty parliamentarians (from Bolivia, Brazil, Colombia, Czech Republic, Denmark, France, Germany, Greece, Ireland, Italy, Luxembourg, Portugal, Spain,…) including the President of the Senate of Bolivia and 22 members of the European Parliament.9 More than 250 organizations worldwide have also signed.10