The whiplash of authoritarianism is being ruthlessly used in Egypt. On January 6, 2021, Ahmed Khalifa, social news editor of Egypt 360 website, was arrested after publishing a series of reports on workers’ legitimate protests. He was falsely charged with joining a terrorist group and spreading fake news, and remains in detention to date. Before his arrest, Khalifa published articles about strikes at the state-owned ElDelta Company for Fertilizers and Chemical Industry. 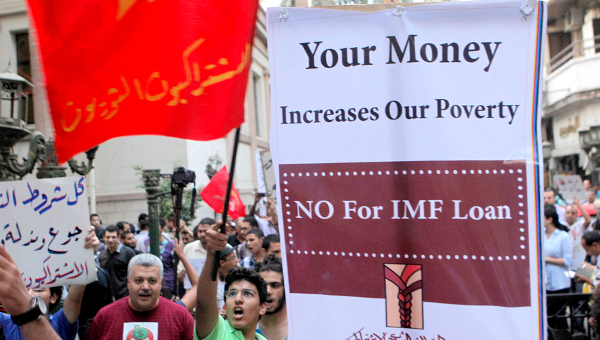 In 2011, bold protest chants flowed out from Tahrir Square: from “The people want the fall of the regime!” to “Down, down with military rule!” – everything seemed full of new possibilities. Today, all the dreams envisioned by those chants lie in tatters. Egyptians have gone through an unprecedented and dizzyingly fast-paced trajectory.

The Hosni Mubarak period (1981–2011) bore the stamp of neoliberal authoritarianism; the tumultuous 30-months long transition after his ouster (2011–13) was filled with hopes about a better future; the afterlife of a military coup (2013–present) has turned history full circle, back to an authoritarian age of austerity and pervasive violence.

Egypt’s short-lived democratic experience lasted one year, starting in 2012 with the presidential election victory of the Muslim Brotherhood’s Mohamed Morsi. Morsi clashed with the military, leading to his ouster by the latter in 2013.

Whereas Mubarak’s ejection was a case of popular mobilization dismantling the executive power and the authority of the state’s ruling coalition, the protests that began on June 29, 2013, and culminated in Morsi’s arrest on July 3, can be traced to manipulation by the army, Interior Ministry, and General Intelligence Services.

The military coup signaled the start of a grotesque wave of counterrevolution led by President Abdel Fattah Al-Sisi, where the opposition was legally crushed and the public sphere militarized. Post-2013 Egyptian politics has been marked with capricious state violence, trivial elections, and a weakened political economy awash with loans and aid carrying multiple obligations, increased dependency on regional states such as Saudi Arabia, Kuwait, and the United Arab Emirates (UAE), as well as financial strangulation by the International Monetary Fund (IMF).

Al-Sisi has left no doubt as to his economic stance, namely unadorned neoliberalism. His economic position crystallized in the organization of the 2015 Sharm El-Sheikh Investment Conference, advertised to foreign investors and international financial institutions as the launch of Egypt’s new Economic Policy Program. Al-Sisi’s administration passed neoliberal tax and deregulatory investment reforms on the first day of the conference.

The new tax reforms sliced taxes on higher income earners from 30% to 22.5%, including corporate profits and personal incomes, advertised several tax exemptions in new special economic zones, ended the judicial oversight over state contracts with private businesses, and immunized investors from the judicial system in Egypt.

In November 2016, the military regime took a loan of $12-billion from the IMF. Since then, it has been implementing austerity measures, increasing the assault on workers’ rights, issuing redundancy notices to many employees, and eliminating subsidies even as it faces resistance.

As part of the loan package, IMF also recommended spending cuts and the introduction of a value-added tax; by June 2017, this resulted in the rise of core inflation by 32%. The prices of other items like food, fuel, and electricity rose much faster. Egyptians saw the cost of bread and cooking gas go up by nearly 60%. To put this into perspective, in the year leading up to the 2011 Arab Spring, food prices in Egypt were subject to an annual increase of around 15%.

The great majority of 97 million Egyptians struggle to make ends meet in an economy that no leader wishes to reform and that has once again become subject to the dictates of imperialist institutions. Everyone is constantly absorbing shocks from perpetually deteriorating political, economic, and social conditions.

The Egyptian state has abandoned most citizens in slums of penury, basing itself on a non-existent social contract. None of these outcomes was envisioned when Egypt’s uprising began in January 2011. At the conclusion of the uprising’s first eighteen days, indeed, everything but this disheartening outcome seemed possible.

Living in a highly unjust order, Egyptians inevitably feel angry at their corrupt dictators. This anger comes out in the form of dissidence. The military regime has assembled an entire police state for the silencing of this opposition. Human Rights Watch describes police stations and prisons in Egypt as having “an assembly line” of torture.

In 2015, according to the now closed al-Nadim Center for the Rehabilitation of Victims of Violence, almost 500 people died in custody while 676 more were tortured. The subsequent years have been terrible as well: in 2016, the Egyptian Coordination of Rights and Freedom reports, another 14 Egyptians died from torture while in custody and said their lawyers received 830 torture complaints.

Forced disappearances, or being put “behind the sun” as this tactic is known in Egypt, are also skyrocketing. In a 2016 report, Amnesty International puts the number of people who disappeared in the 100s. The al-Nadim Center documented 464 cases of forcible disappearance at the hands of the state.

Techniques of mass incarceration have been rapidly developed by the Al-Sisi administration. The Arabic Network for Human Rights Information states in its 2016 report: “New prisons in Egypt came, unfortunately, not as a result of the increase in population, but rather due to a policy of random arrests, unfair trials and unjust laws passed after July 3, 2013, such as the anti-protest law and the decision to increase pre-trial detention periods, as well as the widespread impunity policies.”

Wikithawra has documented the arrest and imprisonment of nearly forty-one thousand people between July 3, 2013, and May 2014. An additional 26,000 more were arrested between 2015 and 2016. It is estimated that roughly 60,000 prisoners in Egypt are being held for political views and actions rather than criminal activity. This figure accounts for nearly 56% of all people being warehoused in the country’s jails.

The current Egyptian state is extremely fragile. In February 2016, Al-Sisi warned detractors: “Please, don’t listen to anyone but me. I am dead serious. Be careful. No one should try my patience or exploit my good manners in attempts to tear down the state. I swear to God that anyone who comes near the state, I will remove from the face of the earth. I am telling you this as the whole of Egypt is listening. What do you think you are doing? Who are you?”

Al-Sisi has good reasons to be scared and worried. On average, there have been five times as many collective labour actions and other protests per day under al-Sisi than there were in the 2008–2010 period. The country is in dire straits. Sooner or later, there is bound to be another revolt for a more humane social order. •