Egypt in Light of the Iranian Revolution: The restoration of a dictatorship?

The new constitution submitted to referendum by Mohamed Morsi, the president of Egypt elected with the support of the Freedom and Justice party, i.e. the political wing of the Muslim Brotherhood in Egypt, in addition to its properties of attacking working-class achievements as well as women’s and minorities’ rights, is preparing the legal ground for the Brotherhood to seize the whole political power in the country. The powers proposed for the president in the constitution, not subject to any supervision, are leading Egypt toward dictatorship. 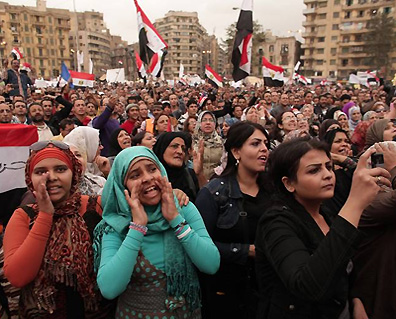 This picture in Egypt is perhaps not precisely the same with what happened in Iran after the 1979 revolution, but by looking at Iran we can clearly see how the restoration of a dictatorship took place. The only important difference might be that the people of Egypt have detected the prospect of such a restoration and are trying to defend the achievements of the revolution without any hesitation.

Although the continuous protests of religious minorities and women (despite all the attempts of the supporters of president Morsi such as sexual harassment and physical assaults) as well as those of political organizations forced the president to make concessions on the content of the constitutional declaration related to the powers granted to the president, Morsi and the Muslim Brotherhood have gone on to complete the constitutional referendum, denying any delay requested by protesters and opposition.

Morsi gave the oversight of the security of the referendum to the army by allowing the army to arrest protesters. As a response to this unnamed state of emergency-like situation the masses chanted “we are not afraid, we will not surrender, because we are used to plastic bullets.” In another attempt Morsi and the Muslim Brotherhood tried to reduce the protests to anti-religious rallies, and the conflict to one between the religious and the secular. The attempt was not too effective because of the presence of many religious people and also some clerics from Al Azhar University in the protests.

The people of Egypt have shown that they are eager to defend the achievements of the 2011 revolution, but let us remember what happens if there is not such a resistance on the basis of the restoration of the dictatorship in the Iranian experience after the 1979 revolution.

Only two months after the revolution a referendum took place asking people to choose between the new system and the old, but without defining the new system or giving any details. Before going to referendum and just after the revolution Khomeini ordered to remove and cancel the law protecting the family. According to this law men were not allowed to choose a second wife until they have permission from their first wife and also a woman had the right to divorce in case her husband was marrying a second wife. This law was canceled only two weeks after the 11th of February. On March 9, the women’s right to judge was removed and on March 11 the Hijab (the head and body covering in Islamic fashion) became compulsory. Women organized the largest protest by women in the history of Iran on March 8 against the orders of Khomeini. Tehran hosted a weak of rallies and protests, regarding which the progressive forces and the intellectuals remained silent.

The dictatorship was going to be built step by step but there was no serious objection to it. Leftist organizations, which called the March 8 movement a petty-bourgeois demand, boycotted the referendum because of the Islamic Republic’s undefined character. The boycott was not supported by all leftist organizations and the Tudeh Party (the Iranian communist party) supported the new form of the state. The People’s Mujahedin of Iran, a radical Islamist organization conditionally accepted the Islamic Republic and declared that if the people’s interests are secured in the future they will support the new regime unconditionally, otherwise they will cut their support completely.

The Islamist liberals inside the interim government under the leadership of the prime minister defended the idea of a republic without any qualifications, but gave support to the Islamic Republic after Khomeini’s rigid reaction of “only Islamic Republic, no more, no less.” The referendum didn’t face any mass opposition and because of that the new regime’s supporters called the opposition “the 2 per cent.” It is true that organizing the masses against such a charismatic leader would not be easy, but the only chance to move the people had already been lost during the March 8 incident.

To restore the dictatorship there was another step to be taken and it was going to be done through the new constitution. The Guardianship of the Islamic Jurists (Velayat-e Faghih) was the messenger of the new dictatorship. The constitution giving all the political power to the religious leader of the Islamic Republic was submitted to the referendum on November 1979. Before the referendum Iran again experienced another important development. Ethnic minorities having found their hopes crushed in the new state put up resistance. The Kurdish people rose with a demand for autonomy for the Kurdistani region in Iran. The centralist government in Tehran interpreted it as an attack on Iranian unity and immediately attacked Kurdistan using the new army of the Guardians of the Islamic Revolution. A long war started in Kurdistan during which some of the leftist organizations gave their support to the struggle of the Kurdish people. After the March 8 women’s rallies against the regime’s reactionary decisions, the Kurdish uprising was the most important development in the early stages of restoration of the dictatorship in Iran.

With such a background people voted in the constitutional referendum. For the second time the people accepted the new regime changes with a huge percentage. Most of the leftist organizations again boycotted the referendum and found it anti-democratic, but Tudeh Party and the majority wing of the Iranian People’s Fedai Guerrillas gave their full support to the constitution. The organization of the People’s Mujahedin this time cut their support as they mentioned in the last referendum. But the only severe objection came from another ethnic region, Azerbaijan, and mainly from its largest city Tabriz. Surprisingly a conservative party called the Muslim People’s Party, followers of a secular religious leader, raised against the Velayet-e Faghih, but the uprising was harshly suppressed by the so-called revolutionary army.

The post-constitution period is the elimination of the opposition from society. The elimination took place step by step, first by exterminating the opposition that publicly declared its objection against the new dictatorship and then by cleaning the post-revolutionary society from the new regime’s genuine supporters but potential opposition movements, such as the Tudeh Party. The organized actions of some political parties and organizations, even relatively vast armed struggles, couldn’t find mass support and they were suppressed in a bloody way.

There are very similar aspects in the restoration of the dictatorship in Iran and Egypt, but as we mentioned before with a very important difference. The people of Egypt are opposing this restoration in the way they started the revolution on January 25, 2011. In Egypt, the Muslim Brotherhood first attacked women and their rights. They even took this attack to the demonstrations using the same method (sexual harassment and physical assault against women) that Mubarak used during the revolutionary demonstrations to keep women away from Tahrir Square and demonstrations elsewhere. In the constitution, the law of protecting family unity is an attack on women’s rights and leaves them with no protection. The definition of Judaism and Christianity as the only religious minorities is also an attack on other communities with different beliefs.

With this constitution prepared and submitted to referendum, if the Muslim Brotherhood had not met a serious opposition, they would bring a more reactionary constitution. It is obvious that Morsi and the Muslim Brotherhood will move to attain all they have lost against the mass resistance in the constitutional process. Consequently, any break in the will and resistance of the people will take Egypt to a state of a new reactionary dictatorship. •