The two bills rushed through India’s parliament on September 20 were objectionable in every conceivable sense. The very fact that they were being rammed through the Rajya Sabha, without being put to vote despite demands for a division, was grossly anti-democratic. The fact that the Center made unilateral and fundamental changes in agricultural marketing arrangements that fall within the State List of the Seventh Schedule of the Constitution was a blow against federalism. To resurrect the pre-independence arrangement under which the peasantry was exposed to the capitalist market without any support of the state, and which crushed it during the Great Depression of the 1930s, was a betrayal of the promise of independence. To pit millions of small peasants against the might of a handful of private buyers, as the bills propose to do, is to open them up to monopsonistic exploitation, meaning exploitation by a single or a few buyers. 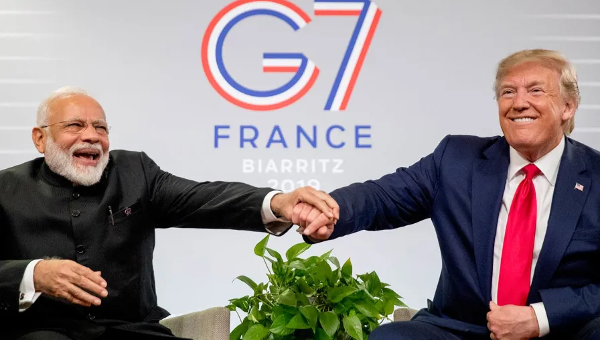 Indian Prime Minister Narendra Modi, of course, has been claiming that the state is not leaving peasants at the mercy of the monopsonists and that the government-guaranteed minimum support price (MSP) regime will continue. But the bills contain nothing on this; and the government refuses to incorporate into law, which testifies to its bad faith, the right of the peasantry to get a minimum support price in accordance with the Swaminathan Commission recommendation that puts the MSP at Cost C2 plus 50 per cent. The peasants in short are being thrown, as under colonialism, to the mercies of a market where price fluctuations have a notoriously high amplitude; and they are rightly putting up a fight against their descent into debt and destitution.

In this entire debate, however, an important dimension has been missed. The debate has been entirely about the condition of the peasantry. But one must also take into account the question of food security, which immediately brings imperialism into the picture.

Food security in a country like India requires self-sufficiency in food production. Food imports are no substitute for domestic food production for several reasons. First, whenever a country the size of India approaches the world market for food grain imports the world prices shoot up, making imports exorbitantly priced. Secondly, quite apart from the fact that the country may not have sufficient foreign exchange to pay for such import, there is also the additional fact that the people may not have enough purchasing power to buy food imported at such exorbitant prices. Third, since food surpluses exist with the imperialist countries, even buying food at such exorbitant prices requires the blessings of imperialism. In fact, denying food to a country at a crucial juncture is a powerful lever in the hands of imperialism to browbeat countries to kowtow to its demands.

All this is not an abstract matter. India was a food grain importer under the Agricultural Trade Development and Assistance Act of 1954 or the PL-480 from the latter half of the 1950s. When there were two disastrous harvests in 1965-66 and 1966-67, and Bihar in particular faced famine conditions, India was forced to become a virtual supplicant before the United States for food imports. It became a case literally of carrying food from ships to kitchens. That is when former Prime Minister of India Indira Gandhi asked Jagjivan Ram, the then food minister, to expedite the drive toward food self-sufficiency, and the Green Revolution was ushered in. The country is still far from being self-sufficient in the sense of growing enough to provide everyone adequate food. But at least it is no longer import-dependent; on the contrary, so drastic is the squeeze on purchasing power in the hands of the people that it has been making regular and substantial exports every year despite India’s people being among the hungriest in the world.

Africa by contrast was cajoled by imperialism into abandoning domestic food grain production and shifting areas toward export crops. The consequences in terms of recurring famines in Africa in the recent period are too well-known to need repetition.

After 1966-67, an elaborate arrangement in terms of MSP, procurement prices, issue prices, procurement operations carried out in the mandis (agricultural markets), a public distribution system, and food subsidies has been devised that seeks to ensure that the interests of the producers and the consumers are reconciled and the country grows enough food to obviate any need for imports. This mechanism is fundamentally antithetical to neoliberalism; not surprisingly it has been getting whittled at the margin, through for instance the distinction introduced in the mid-1990s between the above poverty line (APL) and below poverty line (BPL) populations, with only the latter being eligible for subsidized food grains. Even so, it has prevented the country’s becoming a mendicant for food in the world economy.

Imperialism has made strenuous efforts to dismantle this arrangement, the most obvious being the Doha Round of the World Trade Organization negotiations during which the United States has been arguing that India’s procurement operations at a preannounced price are against the principles of free trade and should be wound up. No government in India until now was so timid or so gullible as to cave in to this imperialist pressure, because of which the Doha Round has been stalled. Now, alas, India has for the first time a government that is either too scared or too ignorant to stand up to imperialism on this issue. In the name of “modernizing agricultural markets,” “21st-century technology,” and the like, India is going back to the colonial days when per capita food grain output was declining even as land was being diverted toward export crops. It is in reality pushing the imperialist agenda.

True, the immediate beneficiaries of the new agricultural marketing policy will be business tycoons like the Ambanis and the Adanis, but they will be entering into contract farming arrangements not so much for food grains as for fruits, vegetables, flowers, and a range of other crops that they will not only sell in the domestic market but also process for exports. An essential corollary of contract farming by private monopsonists is a shift of acreage from food grains to non-food grains, exactly as had happened in the colonial period when a host of export crops like opium and indigo had come up in lieu of food grains in the Bengal Presidency. And the exploitation of peasants by indigo merchants, famously captured in Dinabandhu Mitra’s 19th-century play “Nil Darpan,” is exactly what the peasantry today is apprehensive about and wishes to avoid. 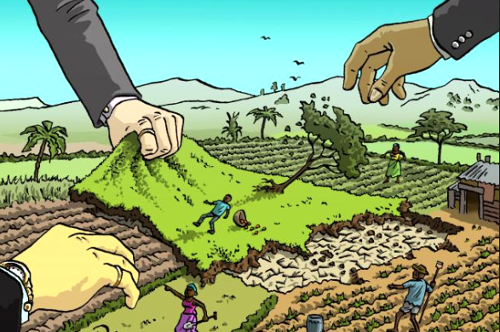 What has been striking about the agricultural arrangement till now is that while looking after (however inadequately) the interests of the peasants, it has prevented the large-scale diversion of land use toward non-food grains and export crops. The dismantling of that arrangement will not only hurt the peasantry but also lead to a diversion of area from food grains to non-food grains and export crops, thereby undermining the country’s food security.

The matter indeed is simple. Since land is a scarce resource, land use must be socially controlled. It cannot be dictated by considerations of private profitability. True, since land is in the possession of the peasants, they have to be looked after even while land use is being socially controlled. They must, in short, get a remunerative price even as land use is being socially controlled. This is what the existing arrangement tried to achieve, which the present government wants to destroy; whatever failings it had, it needed to be rectified within the ambit of that arrangement itself. Destroying that arrangement without even being aware of the need to have social control over land use is precisely the kind of folly that one associates with India’s current Bharatiya Janata Party (BJP) government. Imperialism would like such destruction; and the BJP government is happily obliging.

The only region in the entire non-socialist third world that has shown an acute awareness of the need to have social control over land use, since land is a scarce resource, is Kerala, which has enacted a legislation against the diversion of paddy land for other purposes. That legislation showed perspicacity; the BJP government’s agriculture bills show just the opposite. •

Prabhat Patnaik taught at the Centre for Economic Studies and Planning in the School of Social Sciences at Jawaharlal Nehru University in New Delhi, from 1974 until his retirement in 2010.