How Can Socialists Help Stop Trump?

Eric Blanc interviews Leo Panitch about the upcoming presidential election in the US.

Eric Blanc (EB): I would love to hear your take on the question of whether or not socialists should be voting and/or campaigning for Joe Biden.

For me, I’ve really had a hard time squaring the circle on this, because on the one hand, it seems clear to me that another Trump presidency would be a disaster for our side and, on the other hand, I don’t really clearly see how we can advocate a vote for Biden without going against the grain of our overall project of class formation, trying at all times to polarize and organize workers versus bosses. Maybe the best we can say is that this presidential moment is so exceptional that we should make an exception to our general socialist electoral strategy? 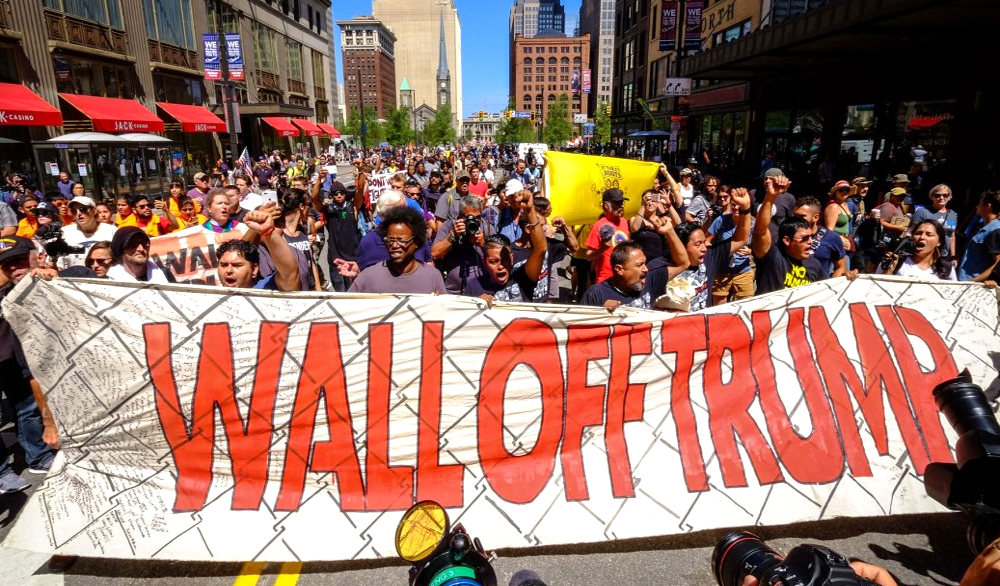 Leo Panitch (LP): I’m sympathetic to people not wanting to validate a career politician who is enmeshed in the capitalist establishment. That said, socialists need to learn to walk and chew gum at the same time. The reality is that the dilemma of the lesser evil will remain with us until we become the kind of force that can not just mobilize but organize the class and pose a viable electoral alternative to the Democrats.

For the time being, in every electoral cycle, you’ll face that dilemma. But right now, we are facing an increasingly dangerous development, which isn’t simply Trump, but also the explicitness and assertiveness of his supporters – his vanguard. And in this kind of moment, you do have to adopt a Popular Front position vis-à-vis the election.

That said, it doesn’t mean that you set aside or even need to apologize for taking this stance. To the contrary, it means you use the reasons you took that approach as a means to go on and organize the class as the Communists did in the 1930s under the Popular Front – more effectively actually than they were doing during their “Class Against Class” line in the beginning of the Depression. And the way you do that is to say, “look, the greatest danger of re-electing Trump is the closure of organizing space, the closure of political space” – which would significantly reduce our chances to do the class formation we need to.

Socialists should be actively campaigning to defeat Trump, to elect Biden, on the basis of the fact that we’re facing a dangerous threat. To treat the current conjuncture as equivalent to the choice between, say, Romney vs. Obama is ludicrous. It isn’t a normal election between tweedle-dee and tweedle-dum. Actively campaigning to defeat Trump is absolutely essential. And one can do it – one should do it – as a socialist.

Beyond that, on a short-term electoral calculation, there’s something else: the labor legislation that has been promised by the Democrats to the labor bureaucracy since Carter and Clinton has never actually been delivered after they were elected. But were the Democrats to take the Senate this time, it’s not impossible that such legislation could go through under pressure from below. It doesn’t have to be seen as radical labor legislation; even dues check off, etc. would be a significant step. Growing the labor movement will inevitably create space for changing the labor movement, for transforming it – and without that transformation happening, we can forget about our chances of a sustained socialist electoral victory happening.

That’s the kind of argument I make – and I don’t see actually why it’s so hard to thread that line.

EB: The tricky thing is the following: Within Left organizing across the country, one of the debates that comes up all the time is not just national presidential elections, but also races on a local and state level, where organized socialists are almost always faced with the question of possibly supporting or endorsing different liberals or progressives. And one of the big things that has been positive about the US left’s trajectory since 2016 is taking class politics more seriously, which has meant moving away from a tradition of supporting just any Democrat. Because of that, we’ve been able to carve out more of an independent class profile and attract people who are looking for a different type of politics, who are looking for socialist politics.

There’s potentially a slippery slope once you’re open to ever supporting a corporate Democrat against the threat of the Right. It’s tricky, because in some ways this lesser evil dilemma is always posed, locally and statewide and nationally. If we were to adopt the stance that the threat of the Right was such that we should always hold our nose and support an establishment Democrat – if that were to become our overarching strategy – then we could get tied up in what the old DSA was tied up in, and what the Communist Party (CP) in the late 1930s and 1940s eventually got tied up in: an over-identification with, and an absorption into, the mainstream of Democratic Party politics.

LP: Right, I don’t think we should always support the lesser evil. For example, in the next presidential election, maybe the differences won’t be so stark (or they could be even more stark, we’ll have to see). But it is a dilemma that isn’t going away any time soon. It will be a dilemma in any moment – but at this moment, it certainly makes sense to vote and campaign for Biden.

Of course, in all sorts of elections, on all different levels, it will likely not make sense to support the Democrat. Though one reason for sometimes supporting a Democrat presidential candidate on a national level is that it gives you more credibility in electing socialists to local and state office if you aren’t rejecting the whole Democratic ticket nationally.

Part of class formation surely needs to be that we have to convince working-class people, particularly white workers, that Trump does not represent them – even though he’s more likely to use the term “working class” than Biden. So it becomes important to be able to intervene in that way against the far right’s attempt to mobilize working-class alienation behind it, which is a danger everywhere in the world these days.

Your point about the Communist Party ending up absorbed by the Democrats is right. But that has everything to do with the fact that their talisman was always the Soviet Union. Initially, the CP’s approach toward Roosevelt and the Democrats, after they dropped the old ultra-left “Class Against Class” line, wasn’t the same as it became later when it started suiting Stalin to be in bed with Roosevelt. Later, during the war, they even called off any organizing or mobilizing or strikes – but that was not a trajectory you have to be on.

EB: One way you could look at this is the difference between the Popular Front as a tactic and as a strategy.

LP: Yes, exactly. Our strategy is the long-term strategy of class independence and class formation. And if the Democrats take the Senate, and if unlike Obama they don’t blow it by the next Congressional election, and some of this labor reform gets through, it creates more space for beginning to change the unions – which is the sine qua non for succeeding.

EB: Even if Biden wins the election, Trump seems intent on trying to steal it by mobilizing his right-wing base and pushing the issue to Republican-packed courts. How do you think the Left should be organizing around the defense of the vote and democracy?

LP: The question is not only who wins the most number of votes, or even Electoral College positions, in November. The challenges to the validity of the election now can’t be turned off because a number of them are already in court. So even if there’s a big Electoral College gap, and certainly if it’s somewhat closer, it’s likely that Trump and the Republicans will press ahead on a big scale.

In response, there will be massive protests – some of which might be violent, and some of which will be led by anarchists looking for an insurrectionary punch-up. I know that it’s impossible in the short time we have to develop any discipline in this respect on the Left, but it’s very important when we’re taking part in these protests that we do everything possible not to give additional pretexts for the repression that Trump might look to unleash.

The great tragedy in this context is that while you see head of the AFL-CIO Richard Trumka saying that they won’t accept Trump trampling on the constitution, one can be pretty sure they’re not going to lead any strike action in the face of Trump’s plans – even though this would be the best way to stop him.

EB: Right, but if Biden clearly wins the election and Trump attempts to hold onto power, it’s conceivable that we could see a massive bottom-up upsurge, including among workers and unionists. Especially if there are big divisions up top in the political establishment, which would help legitimize disruptive action against Trump, I don’t think we can discount the possibility of workplace actions – or even that you could see some union officials going along with a push from below for walkouts and things like that. We definitely can’t predict that will happen, but it does seem like we should politically project that path forward as the best way to defend democracy.

Eric Blanc is an activist and historian based in Oakland, California. He is the author of Red State Revolt: The Teachers’ Strike Wave and Working-Class Politics. Follow his tweets at @_ericblanc.