The Events of October 1970: From Yesterday to Today

In 1970, the national question and the social question were merged (especially in Montreal). The big “bosses” were English. The overwhelmingly francophone working class was exploited as well as oppressed and vice versa. Language on signs and in the workplace, and the names of companies, were predominantly in English. 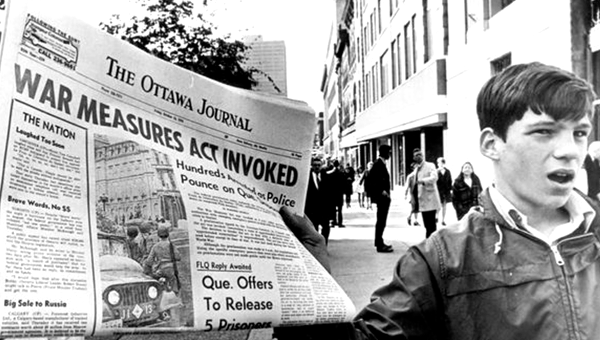 A petty-bourgeois “Quiet Revolution” (1960-1966) was followed by a proletarian “Quiet Revolution” (1966-76), the zenith of which was the general strike of 1972 with its brief pre-revolutionary moments. The latter was defeated by the hegemony of the petty-bourgeois Parti Quebecois (PQ) whose social project was the construction of Quebec Inc., which enjoyed temporary success with Ottawa’s help, for example, in supporting Bombardier and SNC-Lavalin.

The events of October 1970 expressed a lack of confidence that the proletarian-but-inarticulate project of national liberation combined with social emancipation could succeed. The relative electoral success of the left-wing independentist Rassemblement pour l’Indépendance Nationale (RIN) of 1966 (6 per cent of the vote) gave way to the PQ with its right-wing sovereignty-association orientation. The PQ first swallowed up the ‘indépendantiste’ right-wing RN (Ralliement national) and then, against the will of its left wing, the RIN, enabling it to receive 23 per cent of the vote in the spring 1970 election. Montreal Mayor Jean Drapeau’s draconian anti-demonstration repression did the rest, creating the illusion of a Quebec that was a “Cuba of the North,” in line with the armed national liberation struggles of that era.

This was the very impressionistic analysis, presented in a popular book of the time, Pierre Vallière’s Nègres blancs d’Amérique. Vallière did not differentiate between the African-Americans who endured slavery and the Jim Crow system, and the white Quebec people who were caught between the hammer of federalist oppression following the conquest of 1760 and the defeat of the national-democratic revolution of 1837-38, as well as the anvil of their own participation in indigenous oppression and in Canadian imperialism as a junior partner.

The consolidation of the global market of the neoliberal era has really cut back the pretensions of Quebec Inc. even more than Canada Inc. For example, in the food sector, Provigo and IGA were bought by the Canadian companies Loblaws and Sobey. In the hardware sector RONA was bought by the US company Lowe’s. In the IT sector, the dominance of the French company Ubisoft for video games, the American Microsoft and Apple in computers, and Google for artificial intelligence prevail. In entertainment, Cirque du Soleil has just been bought by its Anglo-Canadian and American creditors. Let us add the rout of Bombardier for the benefit of Airbus and Alstom, and SNC-Lavalin which is engulfed by financial scandals. All that remains of Quebec ‘national capital’ are Desjardins and National Bank in finance, and in natural resources Hydro-Québec.

Meanwhile, Canada Inc. lost Nortel and Blackberry but kept in ‘national control’ the Big Five banks and, to a degree, the oil industry, now increasingly neglected by foreign investors, while privatizing the state and industry-building project of Petro-Canada.

The fall of Quebec Inc. brought in its wake a parallel decline and crisis of the PQ. Still claiming to be independentist, the PQ tried in vain to maintain itself by reviving the identitarian nationalism seen in the Great Darkness of the Duplessis era (1936-1960, with the exception of the years of the Second World War).

But this is not “Back to the Future.” The people of Quebec are no longer the hewers of wood and the carriers of water of yesteryear. The ‘revenge of the cradle’ is no more. The Quebecois have become a “modern” people familiar with all the contradictions of neoliberal society, including a very low birth rate, which raises the question of the necessity of immigration, integrated mostly in French, for its survival.

An educated, cosmopolitan, and progressive but rather modest-income urban center layer has emerged – whether as a new proletariat or a new middle class, is up for debate. A part of this layer has found expression in Quebec solidaire (QS) even if the transfer of loyalty from the PQ to QS is not completed. This urban layer accounts for the relative electoral success of QS because of its concentrated vote (10 deputies for 16 per cent of the vote in 2018) as compared to the PQ of 1970 (7 deputies for 23 per cent of the vote). Compared to the early PQ, QS has been slower to emerge electorally, and without any future guarantee.

The more traditional base of the PQ, coming from the suburbs and regions, has shifted its allegiance mostly to the Coalition Avenir Québec (CAQ). The oldest part, and the least exposed to the ethnic and social pluralism of the modern people of Quebec, prefers the federalist CAQ, the authentic heir to Duplessis’ Union Nationale, with a “French Canadian” identity ideology in clear contradiction to the increasingly multi-ethnic reality of Quebec, especially in the Greater Montreal region.

Before the recent #metoo movement emerged, many young women no longer felt the need for feminism. Part of the urban Francophone youth, even progressive ones, have been influenced by neoliberalism and no longer feel the need to defend the French language. Today, we are very far from the 1960s French McGill or St-Léonard movements that filled the streets and led to the events of October 1970. As a result, this youth is no longer ready to mobilize directly for independence despite the fact that Canada’s constitutional non-recognition of the Quebec nation remains total. Quebec-bashing is still popular in English-speaking Canada. In Quebec, the French language is having some difficult times, particularly in Greater Montreal where 50 per cent of the population of Quebec lives.

Young people, worried about their future, are above all preoccupied with ecology. They are faced with catastrophic climate change and the decline in biodiversity, now combined with a health emergency in the form of the pandemic and a major economic crisis. The progressive part of the youth wants to build a pluralist unity of peoples against highly concentrated and globalized finance capitalism (the 1%). This accounts for the prominence of democratic concerns, especially vis-à-vis racialized people and indigenous nations, and the redistributive anti-inequality and anti-poverty preoccupations. The result is a distrust of nationalism and of ethnic exclusivity with which the PQ and CAQ largely dominate the sleeping national movement, including its independence component. 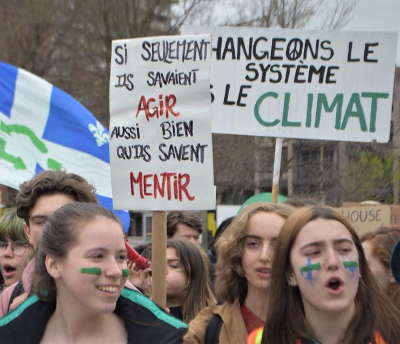 QS should be the counterweight to this retrograde tendency, which, of course, is not only Quebecois but global in scope, reviving ‘Great Nation’ chauvinism as well as narrow nationalism in reaction to neoliberal globalism. This has repercussions on the internationalism induced by the ecological struggle.

QS presents itself as an environmentalist and independence party, but the two aspects are disjointed. Its ecologism is clearly reformist, from which flow soft all-electricity pro-company market-accommodating policies requiring no strategic break with the Toronto-Calgary axis but which is perfectly achievable within the framework of provincialism. Its independence ideology, inspired by Option Nationale (ON), a collective coming from the ultra-nationalist wing of the PQ, posits the nationalism of an independent Quebec more competitive on the world market thanks to its natural resources that facilitate green capitalism (hydro-electricity, lithium, manufacture of batteries, hydro-electric vehicles).

This programmatic weakness of an absent climate radical policy, guaranteeing the IPCC targets enriched by the criticism of Greta Thunberg, has repercussions on the democratic functioning of the party and on the high priority given to parliamentary work, creating a vacuum on the left. This vacuum manifests itself in the rise of the far right in the streets, surfing on the contradictions of the pandemic policy of the CAQ forced to more repression following the failure of its policy of accelerated re-opening of the economy.

At QS’s last Conseil National on September 12, the delegates expressed dissatisfaction with the anti-pandemic policy of the party, which has largely tailed the CAQ, whose management of the COVID-19 outbreak has been catastrophic and remains so (a second wave is upon us). The left of the party, through its political commission, succeeded in opening a breach in this programmatic timidity toward an alternative society of care by proposing “the hiring of 250,000 people in the public sector and by the nationalization of the sectors of public transport, private health and education” at the suggestion of IRIS (Institut de recherche et d’informations socio-économique), the think-tank of the Quebec left. But the balance of power remains so favorable to the leadership of the party that it has been able to completely ignore this resolution, even going so far as not to participate in the Montreal version of the global demonstration for climate justice on September 25th because its demands were too radical.

To use an expression of Paul Rose, who was at the center of the events of October 1970, national liberation and social emancipation, to be reclassified today as socio-ecological emancipation, spontaneously joined 50 years ago, must be joined politically today. Failing to achieve this, the national struggle of the Quebec people will be taken over by the right, including the Patriote’s flag by the extreme right, as we have seen for some time

The mobilization of racialized nationalities and indigenous peoples provides the opportunity to build an alliance of the oppressed peoples of Canada, which combined with the proletariat, particularly the young ones who are inclined to ecological and democratic radicalism, has the potential to overthrow the Canadian bourgeoisie by using the lever of Quebec independence and Aboriginal self-determination. •

Marc Bonhomme is a long-time socialist activist, economist and writer on the Quebec left. His writings can be found at marcbonhomme.com.