COVID-19 and Class Struggle in France

How are French workers responding to the multiple challenges posed by a resurgent COVID-19, a neoliberal government incapable of getting to grips with the crisis, and the limitations imposed by the public health emergency on traditional forms of mass protest? 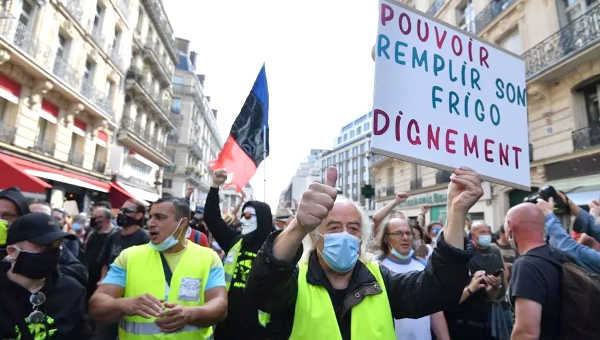 In the unprecedented situation created by the coronavirus pandemic, the ability of large sections of the French working class to take to the streets in mass protest has been visibly curtailed. And for understandable reasons: older workers, health sector employees, black and ethnic minority workers and others in frontline occupations who are particularly vulnerable to infection and hospitalization cannot afford to take the risks involved.

This helps explain the comparatively muted response to the day of action called by the Confédération Générale du Travail (CGT) and other militant union syndicates on September 17. All the same, the core protest in Paris drew an estimated 10,000 people on to the streets, and turnouts in other big cities were respectable, particularly in Toulouse, where between two and three thousand protestors assembled. In the COVID hotspots of Bordeaux and Marseilles, however, attendance was thin when compared with previous years.

COVID Cases on the Rise

There can be no disputing the difficulty of mobilizing in the current context, where COVID-19 is staging a fast and furious resurgence after the comparative lull of the summer months. On September 24, France reported 16,096 new cases of the virus in the previous 24 hours; cases are running far higher than during the first peak in March, when a daily record of 7,578 cases was set.

In response, the Emmanuel Macron government is attempting the impossible: to check the progress of the virus while keeping the economy open for business. In line with the past practice of this right-wing administration, all is being directed from the centre, with little attempt to engage any process of democratic consultation.

As a result, people across France now find themselves more subject than ever to the whims of an authoritarian, top-down regime. On September 23, for example, residents of greater Marseilles and the French overseas territory of Guadeloupe (in the Caribbean) learnt they had been assigned to a new super high risk category. All bars and restaurants were to close with immediate effect: disaster for hundreds of small and micro businesses, many of them under ethnic minority ownership. Needless to add, no provision has yet been made to compensate businesses or provide other forms of support; bar and restaurant owners in Marseilles have already taken to the streets in protest.

It’s evident that a perfect storm is brewing in France, one in which the intensifying health crisis will collide with the onset of winter and the annual flu season, against a backdrop of job losses, factory closures and deteriorating conditions of work.

The aeronautic sector, much of it centred in Toulouse, has already suffered major blows. At the end of June, Airbus announced close to 5,000 job losses in France, a major part of a global cut-back involving a total of 15,000 workers. Airline workers, too, are confronting colossal job losses: 8,000 at Air France alone.

On September 16, 863 workers at the Japanese-owned Bridgestone tyre factory at Béthune in north-east France learnt of the plant’s closure – and the loss of their jobs. A week earlier, the Mulliez family – billionaire owners of the Auchan Retail group – announced the firing of 1,500 employees as part of a ‘restructuring’ process. (The family occupies sixth place in the French fortune stakes.)

Where workers are not being laid off, they are confronting steadily worsening conditions at work. This is particularly the case across the health, transport and retail sectors, where front-line workers are continuing to bear the brunt of the crisis.

A review of some of the multiple strike actions currently in progress across France points to the anger and despair simmering among workers on the COVID battle front, many of them new to industrial action:

Finding Ways to Fight Back

To this quick overview of some of the strikes currently taking place in France should be added other elements of the fight-back: the Yellow Vests, who resumed their Saturday mobilizations across France on September 12, and the thousands of climate activists participating in mass protests called by Youth for climate Change France in 23 locations across France on September 25 and 26.

“The anger is there,” noted Jérôme Rodrigues, an inspirational force within the Yellow Vest movement who lost his right eye to a police flash-ball shooting during a protest in Paris in January 2019. “You’ll find it in homes across the land, around the coffee machine at work… All those who resolutely carried on their work during the months of lockdown – the care workers, the supermarket check-out staff, the construction workers – they are the ‘gilets jaunes’, the people readying to fight back.” •

Susan Ram is a writer, editor and journalist based in south-west France. She's currently at work on a book about the French Left, for publication in India, where she lived for many years.