The Ontario Health Coalition (OHC) expressed deep concern about the Doug Ford government’s privatization of healthcare services, the lack of a coherent plan for a second-wave of COVID-19, and cuts and layoffs at public hospitals while the government shifts funding to private companies for COVID-19 related services. On September 22, Premier Ford said, “I think it is a free market society” in response to questions about private for-profit companies charging Ontarians up to $400 for COVID-19 testing. Under the Canada Health Act patients cannot be charged for medically-necessary services, including diagnostic tests. 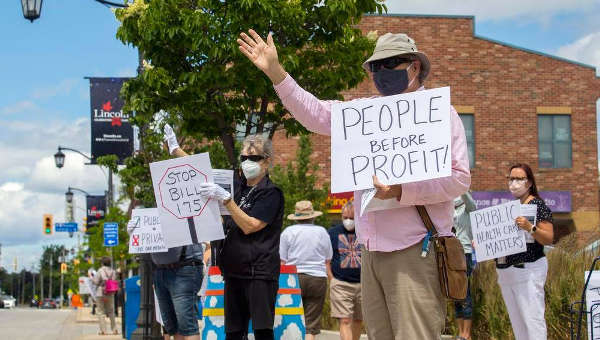 On September 23, the Ford government announced plans to contract private for-profit pharmacies to have COVID testing in their stores. Today (September 24), CBC revealed a draft document developed by the government that proposes to use of so-called private for-profit clinics (euphemistically called “independent health facilities”) to clear diagnostic and surgical backlogs. The Ontario Health Coalition responded today with a call to reopen closed operating rooms and ramp up existing capacity in the public healthcare system and warned that it will do everything it can to stop the government from undermining public healthcare, expanding for-profit privatization, and giving private contracts to companies with which it has close connections.

“The idea that the wealthy would buy their way to the front of the queue in a pandemic, that patients out of desperation be forced to pay outlandish costs for those tests, or that needed nurses would be used by private companies to waste time on home-delivery of unnecessary tests is abhorrent. It is an abrogation of the most deeply-held fundamental values of Canada’s public healthcare system,” warned Natalie Mehra, executive director of the Ontario Health Coalition. “Ontarians and Canadians have been proud of our country’s response to the pandemic to date, especially in comparison to what we have seen in the United States. The lack of preparedness by the Ford government for the second wave, the turning over of healthcare services to private companies and the allowance of charges for COVID testing is unacceptable. Doug Ford needs to get his government’s act together and forge a plan with real concrete provincial coordination of healthcare capacity – in the public interest not for private profit – and they need to get it into operation as soon as possible.”

“There is no excuse to privatize testing, diagnostics and surgeries,” she added. “Across Ontario in public hospitals there are closed operating rooms, underused MRI capacity, labs that can run tests and public assessment centres that can expand capacity. It is a political choice not a necessity, if the Ford government directs the funding to private for-profit corporations, rather than choosing to reopen and to ramp up capacity in the public system. If the pandemic has taught us anything, it has shown the extraordinary value of our public healthcare system and the dangers of handing vital services over to private for-profit companies, as has happened in long-term care.”

The Coalition is demanding that the government create a coherent plan to coordinate the COVID-19 response across public hospitals as it did in previous pandemics and epidemics. Throughout the first wave and now, the government has set some guidelines and has deregulated a series of staffing and care protections at the recommendation of healthcare provider companies, but its general approach has been to leave the organization and coordination and other key decisions to provider companies (for-profit and non-profit) including hospitals, long-term care companies, home care agencies and others, to coordinate or fail to coordinate among themselves reports the Coalition. The government disbanded the local public governance of healthcare by eradicating the LHIN boards during the pandemic and centralized system planning to Ontario Health, its Super Agency in Toronto which has also not provided a coherent coordinated plan. Despite having months to build capacity and prepare for a second wave, the Coalition reports that hospitals are beginning a round of layoffs and cuts to deal with funding shortfalls in a pandemic while the province is expanding privatization.

In provinces where private for-profit clinics have taken over public hospital services, they have undermined public medicare by charging patients a burgeoning array of user charges and extra-billing them for surgeries and diagnostic tests, the Coalition has found in its research reports on private clinics across the country. These charges to patients are double, triple and can range up to five-times the cost of those same procedures in the public healthcare system. Patients are being unlawfully charged thousands or even tens of thousands of dollars for surgeries and diagnostics in private clinics. The clinics have openly violating the Canada Health Act, reports the Coalition, or tacked on charges for medically-unnecessary services, manipulated patients into buying medically unnecessary services, self-referred patients to their own private for-profit clinics rather than public hospitals, and engaged in other unethical or unlawful practices. In British Columbia, private clinics launched a Charter Challenge to bring down the laws protecting single-tier medicare and allow clinics to charge patients thousands of dollars for surgeries and tests. They lost their case two weeks ago. Shoppers Drug Mart which is expanding now into COVID-19 testing under Ford’s plan, has recently invested $75-million in Maple Corporation to launch itself into the virtual primary care “market.” Maple has been charging patients for accessing doctors using its virtual care platform, a practice that Health Coalitions and advocates across the country have called on governments to stop as a violation of the fundamental principles of the Canada Health Act.

“For profit privatization of public hospital and diagnostic services poses a serious threat to access to care for patients and the Ontario Health Coalition will do everything in our power to stop the privatization of these vital healthcare services,” said Ms. Mehra.

Surgical and Diagnostic Backlogs: Restore and Ramp Up Capacity in Public Hospitals

While other provincial governments in British Columbia and Quebec acted months ago to build staffing capacity in long-term care, the same has not been done in Ontario. Despite repeated promises from Premier Doug Ford in daily press conferences to “fix long-term care,” and claims that his government is “all over it” nothing has happened to stabilize the workforce and recruit staff to deal with emergency staffing shortages in long-term care homes. The Health Coalition issued a release earlier this week detailing how the response to the devastating spread of COVID-19 in long-term care currently is inadequate and repeats the same problems that the Coalition and numerous public interest advocates have repeatedly raised throughout the first wave of the pandemic. Infectious disease specialists, family councils, the Health Coalition, legal advocates have repeatedly called for a set of measures to stop the spread of COVID-19 and get care up to safe levels but these measures have not been taken even as almost 2,000 residents and staff have died over the last five months in Ontario’s long-term care homes.

Yesterday, the Ford government announced plans to open up COVID-19 testing sites in private for-profit pharmacies in response to extraordinarily long waits for testing at the public assessment centres that have been opened across the province by public health units and public hospitals. The safety issues are legion, warned the Health Coalition. In public assessment centres, people going for testing have an entirely separate entrance to a hospital from the entrance that other patients use, or the testing is being done in tents and drive through facilities. Staff have full PPE and testing is done by nurses who are trained in infection control and whose scope of practice includes the nasopharyngeal swabbing and proper cleaning is done by trained staff. The Ford government just fast-tracked through legislative change to expand pharmacists’ scope of practice to do this lance testing and pharmacists are not trained to do this type of testing. It is not clear how people who are potentially infected with COVID-19 will be properly screened and prevented from shopping while they are going into the pharmacy for a test.

“The role of asymptomatic COVID-positive people in spreading COVID-19 is understood now world-wide. Whether a person has symptoms or not, they are still shedding the virus while they are infectious. Having people go into retail stores to be tested is a poor infection control practice. The message from Public Health has been that people who think that they have COVID-19 are supposed to self-isolate. This is a serious safety issue and it is privatization. What should have been done, as was done last spring, is to quickly expand capacity in the public assessment centres and make more public assessment centres while expanding public lab capacity to run the tests,” said Ross Sutherland, R.N., M.A. chairperson of the Ontario Health Coalition, and author of a book on for-profit laboratories in Canada.

“The capacity in public hospital laboratories needs to be expanded and labs that are not currently running tests but could do so once the validation process is complete, should be brought on line to expand capacity to run tests,” said Sara Labelle, a laboratory technologist and Board member of the Ontario Health Coalition. “Public hospitals should be funded to expand capacity in the labs that are currently running tests and in the hospitals that are not currently running the tests but could do so. It is a question of funding and staffing – the same question whether you privatize it or keep it public – and it is a political choice to direct funds to private companies rather than public hospitals.”

When services are privatized, vital information is hidden from the public under the guise of commercial competition. Already outbreaks of COVID-19 are being reported for public services and seniors’ care facilities, but they are not being reported for other private sector workplaces and industries. The Health Coalition has already found outbreaks in pharmacies (see our regular updates listing outbreaks). This issue becomes even more serious as the province plans to have testing sites in 60 pharmacies.

Public hospitals and non-profits are required to have public financial reports but deals between public governments and private companies using public money are not obtainable even using access to information legislation. Attempts to privatize healthcare have been repeatedly exposed by provincial auditors to be far more expensive than OHIP prices for the same services. Former politicians, including health ministers and premiers in provinces where privatization has occurred have retired from public office into board positions in private health companies and political staffers have also moved from government to become lobbyists and take other positions in private health companies. The Ontario Health Coalition is demanding full public disclosure of contracts given by the government to private healthcare companies to guard against the giving of contracts to their close contacts and funders in private healthcare who are lobbying for contracts. Once the public health emergency is over, the Coalition will be demanding full auditing of any healthcare contracts given to private companies. •