Conversion as Strategy: From GM to Workplace Plans

In February 2019, shortly after GM’s announcement that its Oshawa assembly operations would be shut down, Sting was in Toronto. He was performing The Last Ship, his musical about the closing of a shipyard in northeast England that resulted in workers occupying and taking the yard over. Unifor leader Jerry Dias grasped the potential of recruiting Sting to the Oshawa cause and invited him to Oshawa. In a moving gesture of solidarity, Sting and his crew arrived to give a free concert of selected songs from the play for the Oshawa workers. Sting departed urging that Oshawa’s story not be “buried under a political carpet.” 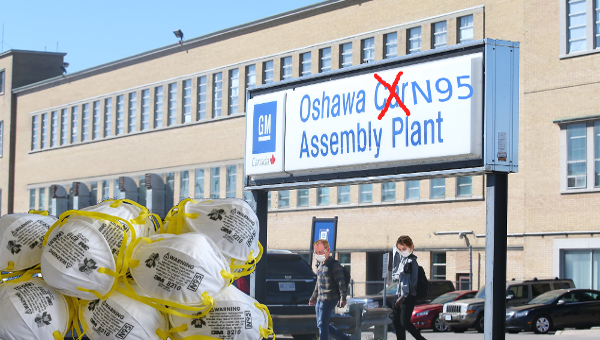 GM cleverly joined in welcoming Sting: “Sting is a celebrated songwriter and it’s great to have him in Oshawa.” The company readily acknowledged “that community-based efforts are important to support employees.” But then it notably added “especially when industries have to change.” To paraphrase Sting, GM – much like the British shipyard owners in Sting’s past – was burying any responsibility to the Oshawa community under the carpet of a “changing world.”

Dias had been livid over GM’s “betrayal.” The corporation had backed down on the job guarantees it “promised” in exchange for major concessions. Moreover, GM’s closure announcement in November, 2019 came only a few weeks after the US, Mexico and Canada reached a trade agreement that was ardently praised by Dias – “Canadians in the auto industry are the biggest winners today.” In his comments at the event with Sting, Dias defiantly tried to recapture the hit to his credibility, declaring that “they’re hoping we’ll go away, but the chances of that are zero.”

For all the brave words, the union in fact showed little of the radicalism it so admired in Sting’s shipyard workers. Elsewhere, the Doug Ford government in Ontario was falling over itself to get the news of the closure off the front pages, frantically asserting that nothing could be done: “it’s a done deal.” Federally, the Liberal government was more tactful but no more helpful. Talk of an alternative was left to Green Jobs Oshawa, a small group of autoworkers, community activists, and retirees with support from the Toronto-based Socialist Project. What Green Jobs Oshawa (GJO) recognized was that a new way of thinking about change that was more than defensive was essential (see Take the Plant, Save the Planet).

First, the issue of jobs had to be linked to a popular appreciation of the importance of maintaining a manufacturing capacity so future needs could be addressed. GJO was thinking of the environment and other social needs and had no inkling of the coming pandemic as it turned out, however, the significance of this perspective quickly emerged when Covid-19 struck. Second, GM had opted out of Oshawa as a key assembly hub and the corporation was no longer a solution to the concern with jobs and manufacturing capacity; it had become part of the problem. An alternative had to go beyond private corporations driven by their private profits. GJO consequently raised looking to public ownership of the plant and new manufacturing possibilities. 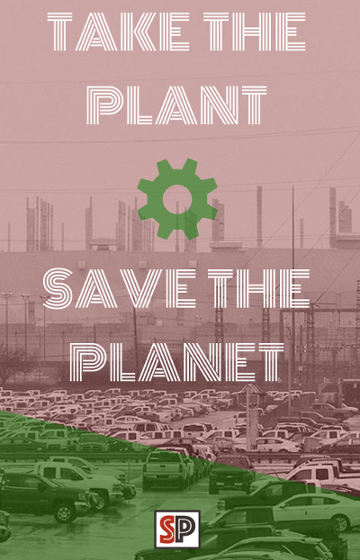 Third, the issue wasn’t just going beyond GM but thinking beyond the industry itself. Producing more private cars was limited not only by competition from China, Mexico and the US but by environmental constraints. Oshawa had to be converted to different products. GJO raised equipment for an aging population and commissioned a feasibility study on governments buying fleets of vehicles converted to electricity for public use: postal vans, utility vehicles, mini-school buses, ambulances, and police vehicles as the economic base of the plant.

Fourth, not just ownership but the wider context was fundamental. If a public company still had to compete globally, this would reproduce the uncertainty that was hammering working people – public sector workers as well as private ones. Creating a new public entity could only be meaningful if it was part of a social plan that gave greater emphasis to inward development and producing products for Canadian use. International trade wasn’t excluded, but it would no longer drive what could or could not be done.

The Shock of the Pandemic

Fast forward to the Covid-19 pandemic. In the US, after a significant delay and pressure from President Donald Trump – including his invoking of the Defense Production Act – GM agreed (on March 27th) to convert its Warren plant in Michigan and Kokomo plant in Indiana to making medical equipment. No comparable announcement was made at the time in Canada, even though it was hard to imagine a more inviting place to produce essential protective equipment than the 10 million-square-foot Oshawa plant all but idle and waiting for suitors. It took another excruciatingly costly month of the health crisis before GM agreed to do in Canada what it was already doing in the US.

On April 24, GM And the Federal government announced that “To help Canada meet the urgent need for face masks for healthcare professionals and for other Canadians, GM Canada is preparing portions of the Oshawa plant to… manufacture approximately one million masks per month at cost.” This was an unambiguously welcome step, enthusiastically embraced by both Green Jobs Oshawa and Unifor. But the announcement raised a number of immediate issues.

Whatever the motives and however modest GM’s entry into making masks in Canada, there is no denying that the agreement with GM represented a very significant development. For one, it implicitly endorses, even if only in limited circumstances, the principle of production for social need not profit. The need in this case couldn’t be more important: limiting the spread of Covid-19 and contributing to the protection of those doing the dangerous but absolutely vital frontline work.

Beyond this, what is now on the agenda is the potential for a much more comprehensive approach to industrial conversion in face of the environmental crisis. The threat to life of climate change which has for the time being been pushed into the background by Covid-19, won’t be allayed by social distancing or fixed by a vaccine. Ecological strategies focusing on conversion will be particularly promising in terms of their potential to actively engage working people by offering them a response to economic restructuring that emphasizes retaining our productive capacity. It also pulls workers toward directly challenging the hold private corporations have over the economy by pointing to reorganizing society around various levels of democratic planning – local and national, workplace and sectoral.

In so doing, it offers a path beyond well-meaning but abstract calls for ‘just transitions’, to concrete struggles on the ground that link defensive battles to larger political struggles, and so pose the central strategic question of building the organizational power to realize ecological and egalitarian goals.

A number of elements might fold into a conversion-focused strategy:

The great dilemma for private sector unions is that the most important thing for workers with decent union jobs has been retaining those jobs, yet unions are structured around the pay and conditions of work, not preserving jobs. Moreover, as corporations use the threat of job loss to discipline workers around wages and working conditions, the overall relevance of unions is threatened. The revival of unions consequently depends on finding ways to address jobs that can also mobilize the public support essential to win their demands. It’s in this light that the discussion of ‘conversion’ seems an important strategic orientation.

But it must be emphasized that taking on such alternative directions can’t be accomplished by simply adding a new policy statement. It means a revolution inside unions – a rethinking of how we allocate our resources, the scale and content of the education we do, the training of staff whose assignments will radically change, how we relate to other unions and the community, and above all on the depth of union democracy and the kind of participation and commitment unions will need to generate from their members.

What of the public sector unions? A focus on conversion will, if implemented, vastly expand and further legitimate the public sector – something the leadership of CUPE Ontario in particular has recognized in its support for Green Jobs Oshawa. But the public sector will have to discover its own strategies, the example of conversion at most suggesting a particular way of approaching such questions. The immediate context for such rethinking is the newly-discovered public appreciation of the role of frontline workers, which has to some extent also flowed over to public sector workers more generally. The credibility of public sector workers has also come from acknowledgement of how right they were when they warned – against the assurances of government and business leaders – that social cuts would drastically undermine our future health. All this has created a moment to creatively build on.

Public sector unions have of late come to more clearly grasp the dangers of being isolated when they enter collective bargaining and the powerful relevance of community support. Can they now take this further and invest a far greater share of their resources and energy to establishing strong ‘Worker-User Councils’ that assert the priority of collective services even when bargaining isn’t imminent? Can they do so across unions? Can they move beyond being defensive and assert their potential leadership role in not just expanding social services, but in improving and democratizing them? Can they thereby demonstrate that rather than weakening the role of public sector workers and their unions, there is a need to strengthen them and ‘convert’ the ever-increasing commercialization and bureaucratization of essential needs to a far greater role over direction and content by those who provide the service and those who use it? •

Green Jobs Oshawa is organizing a Worker Solidarity Cavalcade in Oshawa on May 9th with other allies to express solidarity between essential services, essential products and the community more generally. The Cavalcade will be driving by Lakeridge Hospital, long term care homes, MP’s office, and ending at General Motors Plant in Oshawa. The cars will meet at the staging location of Alexandra Park Baseball Diamond Parking off Buckingham Ave in Oshawa. For more information and to sign the petition on including the production of N95 masks at the idled GM Oshawa facility – and to do so in greater numbers and starting immediately – see greenjobsoshawa.ca.