Big tech’s smart city initiatives aim at taking over governance and decision-making functions in cities around the world. While peer-to-peer platform giants like Uber and AirBnB have long been disrupting labour and housing markets, a current attempt by Sidewalk Labs, a subsidiary of Alphabet, and sibling to Google, to develop data-driven infrastructure in Toronto not only aims to remake entire city districts, but also to subsequently privatize city governance, municipal services, land use planning, transit, housing and more. The current COVID-19 induced crisis may accelerate this trend under the banner of public health, online education and disease control, if we don’t organize appropriately. 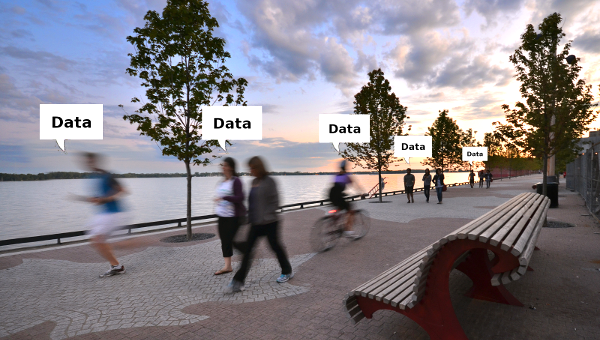 What all the above-mentioned tech giants share is a similar playbook. They use technology to create and corner new markets by operating outside of existing rules and regulations. Uber seeks to turn as many private vehicles as possible into taxis. AirBnB aims to convert as many residential homes as possible into hotels, while Google’s smart city tech aims to collect as much of our behavioural data as possible. These firms engage in practices that open up uncharted terrain by carving out markets for themselves as fast and furious as possible. Not surprisingly, our governments – if they are not enabling them – have to catch up and step in to protect the public from the harm caused by such laissez faire development.

Lobbyists and the Corridors of Power

Fueled by venture capital, big tech is a formidable opponent to social movement actors dealing with their negative impacts and governments trying to rein them in. These companies carry their disproportionate influence straight into the corridors of power, where hordes of lobbyists are clamouring to convince elected officials and staff alike that they bring economic development to cities, that regulatory efforts damage local economic development and that opposition stifles innovation and much needed efficiencies. Google in Toronto, for instance, registered 1,638 lobbying contacts with elected officials and staff in a 14-month period alone, which translates into 117 points of contacts a month, 29 a week, or close to 6 points of contacts per day. For all we know, Google’s lobbying efforts likely have set a new record for corporate meddling at Toronto City Hall – and that’s just one level of government.

What these companies also share are almost limitless resources, particularly when compared to cash-strapped local governments following decades of neoliberalism. Google’s revenue for the first quarter of 2019, for instance, was $40.3-billion (US). This power imbalance is what steamrolls government agencies like Waterfront Toronto. Bound by rushed legal agreements that were signed without due diligence and government oversight, the tri-government agency has effectively become the co-creator and evaluator of Google’s plans for Toronto’s waterfront. As such, the agency’s ability to provide independent oversight has been severely compromised. Accepting $5.8-million from Sidewalk Labs to pay for current and future staff, representing 83% of Waterfront Toronto’s total operating budget for 2017/18, entrenched Google’s influence in Waterfront Toronto even further. The fact that Google provides more money to Waterfront Toronto than the $4.5-million it receives from all governments combined for 2017/18 should give us reason to pause. It’s not a stretch to suggest that Sidewalk Labs is paying Waterfront Toronto to approve Google’s plans. Waterfront Toronto has become the de facto development arm for Google in Canada, owing more to Google executives in Mountainview California, than to our own elected governments. This is a textbook case of corporate capture.

To appreciate Google’s desire to privatize the governance of our cities, we only need to look at the content of the Master Innovation and Development Plan (MIDP) co-created by Sidewalk Labs and its enabler, Waterfront Toronto. The MIDP proposed 5 new governance entities designed to wrestle power away from our democratic institutions. There is really no misreading of Google’s initiative. From the very beginning, as Ontario’s Auditor General pointed out in her 2018 report, this has been a highly unusual process, where Waterfront Toronto has tried to set Google up with exclusive access to land, planning, decision making and data. If it would have not been for a number of courageous Torontonians who resigned from Waterfront Toronto’s Boards and Advisory Panels to raise attention to the agency’s thinly veiled attempt to embed Google’s monopoly power along our waterfront, this project would not have received the critical attention it since has.

Torontonians Are the Data

Given what we know today about how data can be and has been used to influence elections and geo-politics, we all need to be on alert when a US monopoly like Google tries to sell us smart city infrastructure to collect our data. Despite mountains of criticism, Waterfront Toronto continues to work hard to provide Google with a foothold in the city. Given the corporate capture of Waterfront Toronto, there is little hope for the agency to be able to protect the public interest.

For this reason, citizen groups like #BlockSidewalk have been organizing to ensure that a hard no remains on the table. After all, no one but Google had asked Waterfront Toronto to build a surveillance test bed in Toronto. For members of #BlockSidewalk and many of its allies Google remains the wrong partner and no digital infrastructure projects of such magnitude should be allowed to proceed within a regulatory vacuum.

It is time for the organized left to withstand the co-optional powers of Big Tech and to organize for a future that uses technology toward the empowerment of all rather than the private benefit of some. The current COVID-19 induced crisis may allow for just that opportunity, but it may also lead to the further integration of monopoly surveillance tech and state power in the name of disease control, public health and online education. •

Thorben Wieditz is an urban geographer who works at the intersection of labour, community and big tech. He helped establish regulatory frameworks for companies like AirBnB in Toronto, Vancouver and Ottawa, and is a member of #BlockSidewalk. Follow him on Twitter @twieditz.