It was an event that had happened countless times before. General Motors had been producing cars in Oshawa for over 100 years, and the plant had been at the centre of car production in Canada. This time, though, was different. Workers at the plant crowded around the pickup truck and photographed it as it left the line. This one was the last one. The plant was closing. 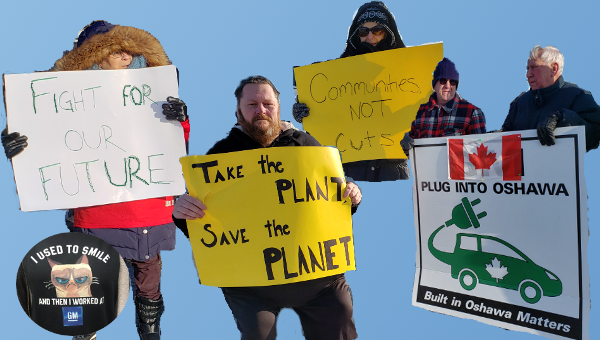 Rebecca Keetch had been working at the GM plant since 2006. Workers at the plant, she tells Briarpatch, are some of the best in the business. The “fantastic skilled workforce has launched vehicles in record time,” and has consistently “exceeded [GM’s] expectations.” At its height, the facility in Oshawa employed between 17,000 and 22,000 workers, Keetch says. As that last truck rolled down the line, that number was down to 2,500. By the end of 2020, it will be 300.

When GM announced that the plant would be closing in 2018, the battle cry from the national executive of Unifor – the union that represents workers at the plant – was that GM needs to stay. The union ran ads during the 2019 Superbowl accusing the company of “leaving workers out in the cold,” and encouraged a boycott of Mexican-made GM vehicles.

Keetch is skeptical of the possibility that GM can be pressured to stay in Oshawa. “There’s nothing that the workers are able to do to stop this from happening,” she says. “This is a political issue, and an issue with capitalism itself. Free trade laws have decimated our manufacturing, auto has been a victim of bad trade policy. We’re suffering the effects of that now.”

But the plant can continue to exist without GM. Keetch and some fellow workers at Unifor Local 222 have more ambitious plans. “Some people, and it wasn’t just workers at the plant, had the idea that we shouldn’t be fighting to keep GM here – we should be fighting to nationalize the plant.”

“We want public ownership to not be a dirty term anymore,” Keetch says. “We need to have democratic control of some of our industries. We cannot leave it up to corporations who are just trying to commodify the climate crisis.”

This idea is the animating force behind Green Jobs Oshawa (GJO), a coalition of unions and community organizations that has been trying to make it a reality in Oshawa. If they’re successful, Keetch says, then “Oshawa could be the engine of a Green New Deal in Canada.”

Early on in the process, GJO commissioned a feasibility study based on a “triple bottom line” approach which measured the potential economic, environmental, and social effects of nationalizing the plant. It found that, with an investment of $1.4 to $1.9-billion, the plant could be re-tooled and begin electric vehicle production. The GM bailout in 2009, during the global economic crisis, was about $60-billion in loans. Over $3-billion was never paid back.

By year five, according to the study, the number of gas-powered vehicles replaced by electric ones built at the plant would cause a decrease of 400,000 metric tonnes of CO2 emissions . That same year, the plant would be projected to begin making “modest” profits. A total of over 13,000 good, union jobs would be created in the process, including “multiplier jobs” up and down the supply chain.

The Durham Regional Labour Council (DRLC), a roundtable of unions in the region, is on board with the plan. An early supporter of the GJO coalition, the labour council has been working to mobilize support for GJO across the labour movement. They’ve also approached the Ontario NDP, who adopted a support motion.

DRLC President Tiffany Balducci has been doing door-to-door canvassing with Green Jobs Oshawa, and says she’s had overwhelming support from the community. “We’re seeing that there’s still hope in our community when we talk to people about this,” she says. “They’re saying that if we can bail out GM with billions of dollars, why can’t we bail out the workers in Oshawa, and address the climate emergency at the same time?” 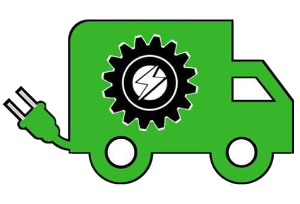 Balducci says that a nationalized factory building electric vehicles for Canada Post could be the beginning of a seismic shift in how Canada deals with climate change. The crown corporation, she says, is “a massive piece of federal infrastructure, it’s publicly owned, it’s the largest vehicle fleet in the country, and it’s the largest logistics network in the country.”

The Canadian Union of Postal Workers (CUPW) has been supporting the campaign as well, mobilizing postal workers to show up at Green Jobs Oshawa events and publicly advocating for the plant’s nationalization. Since 2015, when CUPW launched its Delivering Community Power program, the union has been pushing an ambitious set of demands that would fundamentally transform the post office. Along with demands to electrify its fleet of vehicles, CUPW also wants post offices across the country to be retrofitted to save energy, and to become producers of renewable energy when possible by installing rooftop solar panels. Public parking lots outside post offices, according to the plan, would include charging stations for electric vehicles.

The union also wants to implement a postal banking system, which would finance local climate transition initiatives – along with pushing out predatory financial institutions like payday lenders, and provide financial services in rural and Indigenous communities where banks aren’t available.

The organizations behind Delivering Community Power – including collaborators The Leap and Friends of Public Services – believe that the proliferation of ideas like the one in Oshawa needs to accelerate. Friends of Public Services, a grassroots organization that advocates for expanded, democratic public services, wants to “go beyond a defense of existing services, to expand the public’s imagination of how public services can redistribute wealth, improve quality of life across the board, and lay the groundwork for a sustainable economy.” That means ideas like the nationalization of the GM plant need to expand into every part of the public sector.

Balducci, for her part, sees the campaign as contributing to a fundamental part of the idea behind a Green New Deal – the unification of the labour and environmental movements. “There was this idea, when I was getting involved in the labour movement, that it was climate justice versus jobs,” she says. “We really want to bust that narrative – we know that there are no jobs on a dead planet. The climate emergency is a union issue.” •

This article first published on the Briarpatch Magazine website.

Jon Milton is a student, journalist, and union member based in Montreal. His work is primarily focused on grassroots social movements and the mechanics of institutional power. Follow him at @514jon.