Bernie’s Green New Deal Stands Out, and Now Labor Must Step Up

First, Bernie’s Green New Deal is more ambitious than that of his rivals. It states: “We must guarantee health care, housing, and a good-paying job to every American, especially to those who have been historically excluded from economic prosperity.” In terms of addressing the climate crisis, it seeks to achieve 100 percent sustainable energy for electricity and transportation by no later than 2030 and to fully decarbonize the economy by 2050 at the latest. 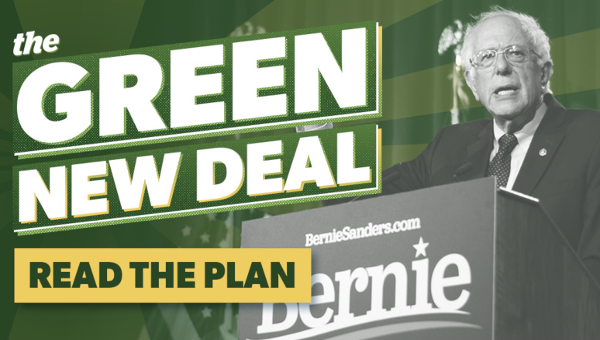 This level of ambition reflects Bernie’s social and economic vision and his willingness to identify who and what stands in our way in terms of meeting these objectives: the billionaire class, the health insurance and pharmaceutical industries, fossil fuel companies, Wall Street, and the military-industrial complex. Both Biden and Warren want to “tweak” the system, to “save it from itself” – but not to change it fundamentally.

Second, Bernie’s Green New Deal differs from others in that it embraces public ownership as a key means of achieving ambitious social and climate protection objectives. Bernie understands that only by expanding public ownership and public investment in key economic sectors, particularly in energy, transportation, and resilient infrastructure, can bold targets become a reality.

In contrast, none of the other leading Democratic presidential candidates are prepared to say how they intend to bring about a “clean energy revolution.” For example, Biden says under his Administration the US will invest trillions of dollars to turn the country into a “clean energy superpower.” Warren says pretty much the same. But these are the kinds of promises that have been at the heart of pro-business climate policy for more than a decade, and it hasn’t delivered. Making money off renewable energy turns out to be more difficult than many people hoped, private investment has been unreliable, and emissions continue to rise.

Third, Bernie’s vision is internationalist and anti-war. It supports helping other countries achieve emissions reductions while improving the quality of life, particularly in the developing countries. Under Bernie’s plan, the U.S. will “invest $200 billion in the Green Climate Fund for the equitable transfer of renewable technologies, climate adaptation, and assistance in adopting sustainable energies.” The other candidates are concerned to turn the clean energy revolution into a profit-making venture for US corporations, which will mean ensuring the protection of “intellectual property,” as well as the aggressive enforcement of WTO rules. In contrast, Bernie’s plan will “Bring together the leaders of the major industrialized nations with the goal of using the trillions of dollars our nations spend on misguided wars and weapons of mass destruction to instead work together internationally to combat our climate crisis and take on the fossil fuel industry… We are uniquely positioned to lead the planet in a wholesale shift away from militarism.”

Beyond “Leveraging” and “Incentivizing”

Both Biden and Warren talk about investing trillions of dollars in a Green New Deal. Biden says he will demand that Congress enacts legislation in the first year of his presidency that “makes a historic investment in clean energy and climate research and innovation” and “incentivizes the rapid deployment of clean energy innovations across the economy.” Similarly, Warren talks about “Leveraging federal R&D to create domestic jobs and sustainable investments in the future.”

But we’ve been down the “leveraging” and “incentivizing” road before. For more than a decade, Democratic hopefuls have talked about “mobilizing the private sector” with incentives and subsidies, believing that this would create “millions of green jobs.”

These jobs have failed to materialize. This is because it is not easy for private corporations and investors to make money from the kind of green projects the world’s climate and environment desperately need right now. And if they can’t make money, then they won’t invest. So the social and environmental crises are allowed to worsen while millions of workers are stuck in precarious and low-paid work.

Meanwhile, jobs in fracking and pipeline construction have been created as a result of the US’ “energy dominance” agenda. Some unions have benefited from the growth of this sector, but the policy – which both Hillary and Obama also endorsed – is helping to drive up global emissions by almost 2% per year.

There is no travel ban on emissions: pollution from exported coal, oil and gas still gets dumped in the atmosphere and the oceans, and we’re all going to pay the price. Hurricane Maria wrecked Puerto Rico, and claimed the lives of 4,500 people who could not get their medications due to the loss of electrical power for many months after the storm. Wildfires in California killed almost 100 people in 2018, and several more this year after a late start. “Extreme weather events” are growing in number and their severity is generally increasing. Meanwhile, fracking operations in the US have released massive amounts of methane into the atmosphere – a gas that is 86 times more powerful than CO2 in terms of its “global warming potential” on a 20-year time scale. The EPA still refuses to acknowledge the true extent or the impact of “fugitive” methane that leaks from drilling sites.

Biden and Warren support a Green New Deal and each has called for ambitious emissions reductions targets. But both avoid the key question of who is going to own, control and manage the next energy system.

Bernie’s commitment to public ownership of renewable energy is a game changer. Privatized and deregulated energy markets have meant that the current approach to renewable energy has produced a senseless war among private developers to win a few lucrative contracts. This has led to downward pressure on profits, and therefore on wages and conditions. Residential solar is almost entirely non-union. Almost all of the solar panels installed in the US are imported. And despite billions in subsidies for private companies, wind and solar power is still less than 10% of the US’ electricity supply, whereas gas and coal together provide 60% and nuclear almost 20%. The lack of good union jobs in most of the renewable energy sector just plays into the hands of Trump and the large fossil fuel interests.

Bernie understands that reaching clean energy and climate targets will require the expansion of public ownership. Bernie’s plan reminds us that the New Deal of the 1930s, “provided inexpensive electricity to America through efforts like the Rural Electrification Administration and the Federal Power Marketing Administrations… As part of the Green New Deal, we will expand on that success.”

In contrast, Biden and Warren don’t like to mention the 1930s New Deal. This is because it provides a historical example of how expanding public ownership and regulation can achieve bold and socially necessary objectives. That’s too close to “socialism” for their liking.

An Economy for the People and 20 Million Union Jobs

Bernie’s Green New Deal is not just about energy; it is comprehensive and economy-wide, laying out plans for transport, buildings, and other key sectors.

This “pro-public,” economy-wide approach is what makes Bernie’s promise to create 20 million jobs credible, and not just a number plucked from the sky, accompanied by a prayer to “market forces”: he understands the power of the federal government to create huge numbers of good jobs through direct public investment. Bernie also understands the importance of strengthening unions, and that public investment in creating good jobs is a great way to strengthen unions. That’s why he says, “These jobs will be good paying, union jobs with strong benefits and safety standards in steel and auto manufacturing, construction, energy efficiency retrofitting, coding and server farms, and renewable power plants. We will also create millions of jobs in sustainable agriculture, engineering, a reimagined and expanded Civilian Conservation Corp, and preserving our public lands.”

The Green New Deal for Public Housing Act, proposed by Rep. Alexandria Ocasio-Cortez and Sen. Bernie Sanders in November 2019, would undertake a decade of decarbonization and capital repairs to the country’s public building stock (that is, homes managed by Public Housing Agencies (PHAs) as well as some tribal housing), tackling climate change and inequality at the same time.

Within this pro-public framework, a genuine “just transition” for fossil fuel workers also becomes possible. Bernie’s plan guarantees five years of a worker’s current salary, housing assistance, job training, health care, pension support, and priority job placement for any displaced worker, as well as early retirement support for those who choose it or can no longer work. Beyond protecting workers affected by energy transition, the Sanders plan calls for the unprecedented creation of new union jobs at a scale that would more than double the ranks of unions in the US today.

Bernie’s Green New Deal therefore presents progressive unions with a historic opportunity to rebuild the labor movement as a social force – and to partner with a president who wants to reinvent the US economy. It will also provide the kind of programmatic goals that can provide the platform for unity between labor and other movements.

Unions opposing the GND do not generally dispute the need for urgent action on climate change. But they are concerned about the potential impact of dramatic climate policy action on workers in energy-intensive sectors, and on the economy more broadly. This is a perfectly reasonable and important concern, and one that not only the labor movement but also other social movements have to confront. More specifically, these concerns include:

Given these concerns, the currently opposing unions propose: “A comprehensive, economy-wide legislative solution to climate change because the Clean Air Act is not an appropriate vehicle for addressing the multi-sector emission reductions or aggressive technology incentives needed to meet climate targets.”

The concerns of those unions that currently oppose the GND can be addressed in ways that do not compromise the sense of urgency that has shifted the national debate. Bernie’s Green New Deal has the potential to unite labor, whereas Biden and Warren’s plans will divide us still further. As a movement, labor can play a leading role in developing an implementation strategy for an ambitious climate protection agenda.

The core elements of the Sanders Climate Plan are points of unity within the labor movement: public infrastructure investment across the economy, built and run by union labor, job protections for current workers, and an organizing opportunity like none other. Will we step up and fight for it? •

This paper was prepared for Labor for Bernie by Trade Unions for Energy Democracy (TUED). The opinions expressed herein may not reflect the policies and positions of Labor for Bernie or unions participating in TUED. The paper is offered for discussion and debate.

Trade Unions for Energy Democracy (TUED) is a global, multi-sector initiative to advance democratic direction and control of energy in a way that promotes solutions to the climate crisis, energy poverty, the degradation of both land and people, and responds to the attacks on workers’ rights and protections.