Oppose US and Iran War

In the early morning of January 3, at the order of US President Donald Trump and without any authorization from the US Congress, US airstrikes targeted a convoy near the Baghdad airport in Iraq and killed Qasem Soleimani, the commander of the Quds Force of Iran’s Islamic Revolutionary Guard Corps, and Abu Mahdi al-Mauhandis, top Iraqi militia commander/founder of Kataib Hezbollah militia and at least six others. The US Department of Defense stated that this attack was in response to Iranian-orchestrated attacks on US bases in Iraq during the past few months, including a December 27 attack on an Iraqi military base near Kirkuk which killed a US contractor and wounded 4 US soldiers. There are currently 5300 US troops in Iraq. 3000 more are on their way to the Middle East. 14,000 additional troops have been sent to the region since May 2019. 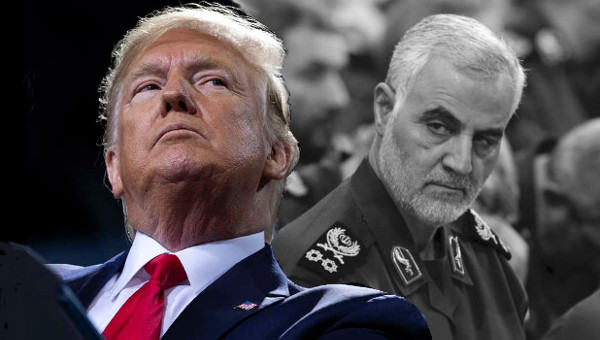 The idea of assassinating Qasem Soleimani was publicly endorsed by a December 31 Wall Street Journal editorial statement which also called on Trump to attack Iranian militias in Syria. Soleimani himself had challenged Trump in July 2019 by addressing him in a statement and saying that “I and the Quds force are your contenders.”

This action by the US follows a December 31 assault by thousands of protesters mobilized and organized by pro-Iranian militias known as “al-Hashd al-Sha’bi” (also known as Popular Mobilization Forces) entering Baghdad’s heavily protected Green Zone and breaking into the US embassy and burning the reception area, in response to December 29 US airstrikes on Iranian-backed Kataib Hezbollah militia bases on the Iraq and Syria border which killed 25 and injured 50 militia members.

Earlier in June 2019, Trump had cancelled a US military assault on Iran which had aimed to respond to Iran’s shooting down a US drone. His administration decided not to respond to Iran’s September 14 airstrikes on Saudi oil facilities and earlier attacks on oil tankers in the Gulf region attributed to Iran. Trump himself had recently emphasized that he was no longer interested in “regime change” in Iran but wanted to continue imposing the backbreaking sanctions on Iran to force the Iranian government to change its behavior.

However, what the latest ominous developments reveal is that regardless of what imperialist leaders might wish, the compulsion of capitalist-imperialist powers to compete and show their superiority has a logic of its own.

For the Iranian government, Qasem Soleimani was the top commander, second-most important leader after Ayatollah Khamenei, and architect of Iran’s bloody intervention in Syria as well as the main decision maker in Iraq. Iran has promised “harsh revenge.” Its ally, the Lebanese Hezbollah has issued a similar threat. Israel has been engaged in low-intensity war with Iran for some time by targeting Iranian bases in Syria and Iraq, and the Lebanese Hezbollah. Israel might strike Iran itself if necessary.

War and Suppressing the Popular Uprisings

The most worrisome aspect of these developments is that they might lead to catastrophic consequences and full-scale war. That would in turn overshadow the wave of uprisings that have broken out in the Middle East and North Africa region in 2019, from Sudan and Algeria to Iraq, Lebanon and Iran. All of these uprisings have opposed imperialism, authoritarianism, neoliberalism, poverty, corruption, religious fundamentalism and sectarianism. Women have been active participants and often in the forefront. The participants are mostly working-class and unemployed youth. They are not content with the ouster of individual ruling figures but want to change the socioeconomic and political system. For all these reasons, the revolts could mark the beginning of a new progressive and revolutionary chapter for the region as a whole, although significant difficulties and challenges exist.

Authoritarian rulers and systems however, will not be easily pushed back. In Iraq, a wave of popular protests that began on October 2 in Baghdad and the Shi’a south have been brutally attacked by the Iranian-backed Iraqi government with support from Iran’s Islamic Revolutionary Guard Corps (IRGC) and the Iranian sponsored Shi’a fundamentalist militia, al-Hashd al-Sha’bi which includes the Kataib Hezbollah. Small but increasing expressions of support for the uprising have emerged in majority Sunni and Kurdish areas. 500 protesters have been killed and over 19,000 injured.

In Iran, the Islamic Revolutionary Guard Corps and other government forces brutally suppressed the nationwide popular protests that broke out on November 15 in opposition to a rise in the price of petroleum and called for the overthrow of the Islamic Republic and an end to its military interventions in the region. According to Reuters, at least 1500 protesters were killed in four days. Between 8000 and 10,000 mostly young protesters have been arrested and most have not been heard from. Many political prisoners, including labour, feminist, and oppressed minority activists languish in prison from previous protests. These and revolutionary protesters in Iraq, Lebanon, Sudan and Algeria are the forces that socialists around the world need to reach out to and support.

The joy expressed by some at the death of the criminal reactionary Qasem Soleimani is understandable, given his role in repressing revolutionary popular classes in Iran, Syria, Iraq and in expanding Iran’s militarism and influence in the region. However, his assassination represents nothing affirmative for the popular uprisings in Iraq and the region.

This US imperialist action was not done to empower the people of Iraq. On the contrary, the result of this imperialist action could actually increase the risk of derailing the popular uprising in Iraq. The threat is not necessarily that the current Iraqi protest movement would concentrate solely on opposing the United States after this assassination. Up to now, the majority of protesters have clearly opposed all foreign influences, especially Iran and the USA. However, they might now be overwhelmed by another movement controlled and organized by pro-Iranian militias, which uses this assassination to make the departure of Americans the only demand, while not challenging the current sectarian and crony capitalist system. The risk is that the new US-Iranian escalation will dictate all internal issues in Iraq and make Iraq the site of a direct confrontation between the US and Iran. 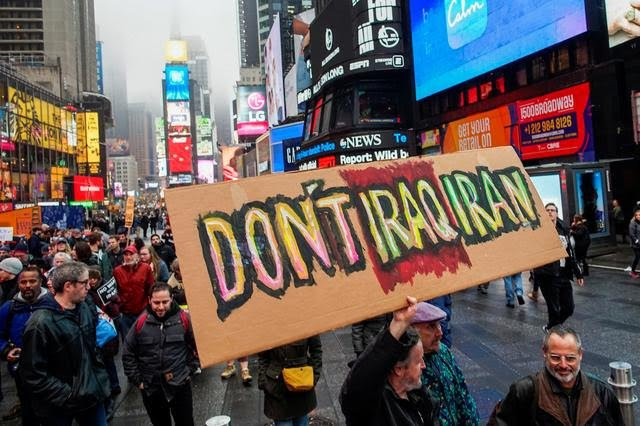 The popular uprisings in Iraq, Iran and Lebanon will all suffer while the rulers who have been condemned by the protesters try to instrumentalize the crisis in their effort to remain in power.

The reactions of Iraqi officials and political personalities close to Iran point in this direction. Iraqi prime minister Adil Abdul-Mahdi who had earlier announced his upcoming resignation in face of the mass protests, condemned the killings as a violation of the conditions of the US military presence in Iraq and an act of aggression that breached Iraq’s sovereignty and would lead to war. Iraqi Shi’a cleric, Moqtada al-Sadr on his side, ordered his followers to be ready to defend Iraq, while mourning the death of Soleimani.

In the face of all these developments, opposition to US imperialism’s airstrikes and war threats against Iran and Iraq can only be effective when rooted in solidarity with the progressive and revolutionary forces in the Middle East and North African region and full opposition to all the authoritarian governments and imperialists powers in the region.

We oppose all global and regional imperialists and authoritarians.

Solidarity with the popular uprisings in the MENA region and elsewhere.

Our destinies are linked. •

Alliance of Middle Eastern and North African Socialists (AMENAS) is opposed to all the international and Middle Eastern regional imperialist powers and their wars. Their website is allianceofmesocialists.org.