Lessons from Bolivia: A View from Cuba

Sad news comes from Bolivia. The coup has been accomplished. Once again, the military has decided the game in our Latin American region, treading on the very Constitution they swore to defend. President Evo Morales and Vice-President Álvaro García Linera resigned. They said it was to avoid further bloodshed. It’s the end of an era in the history of that Andean nation, the same one that witnessed Che’s death. 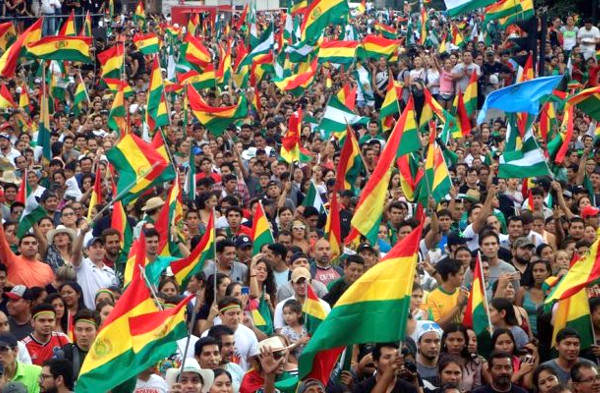 No one can deny there was a coup. Evo’s decision to run for reelection may be questioned, but it cannot be ignored that there was a ruling by the judiciary power which authorized his candidacy. In any case, it can be said that there was an institutional crisis, as well as issues with the counting of the votes. What cannot be denied is that Evo should have been the legitimate President until another legitimate President took office. The intervention by the armed forces can only be considered a coup.

Evo and his group made mistakes. When I heard that they had authorized an audit by the Organization of American States (OAS), I thought that had to be a masterful plan hatched by Evo and Linera, because it would be tremendously stupid if it wasn’t. By now accustomed to the intelligence of Bolivian leaders, I believed they had everything under control, plan and counterplan. From the distance, I lack the data to judge them properly. The fact is that the OAS came in and played its role.

Tomorrow We Can Fight Again

My romantic side tells me that Evo should not quit; that he should play it out to the bitter end, like Allende. But I want to wait some time before I form a complete opinion. Time will tell how correct that decision was. I want to know what Evo and the Movimiento al Socialismo (MAS) will do now. I want to believe his words when he said that he hasn’t betrayed his people, and that he will remain in Bolivia to fight from the bottom, with his coca growers. We’ll see.

What can we Cubans learn from what has happened in Bolivia? What teachings does the fate of popular processes in Latin America offer us? That’s something to keep in mind at this critical junction.

We should first understand what has happened. Evo Morales managed to peacefully coexist, for years, with the Bolivian middle-class. He walked on the path of liberal bourgeois democracy, getting 47 per cent of the vote in the last election. However, the system shook him off, like a dog shakes off rainwater. The right showed its most violent and racist side, reaching extremes such as the rape of a indigenous young woman, who was then hanged with her own braids. The army and the police, which Evo didn’t manage to change, proved to be quite at home at oligarchic domination.

Evo was the President. The MAS attained a degree of hegemony for years. However, the political system of liberal democracy – especially in the shape it takes in Latin America, with its institutions and power apparatus, its parties, its press, its justice and its military – proved to be effective.

The bourgeoisie may let you sit at the head of the table, but it knows it owns the table, the chairs, the windows and the house itself. Sooner or later, they will kick you out of it.

And so one cannot help but remember Fidel, and the clarity with which he led the Cuban Revolution once the insurrectionary phase was completed. He knew the first thing to be done was to disband the old army and the old police, to arm the people, to destabilize the entire bourgeois institutional system. The triumph and continuity of the Revolution in Cuba were achieved thanks to a complete dismantling of the preceding institutional apparatus, and to the cultural shift that was brought about, in which even the concepts of that political system were discredited and largely forgotten.

Of course, it’s not the same to triumph by means of an armed revolution than by winning an election. In Cuba we were lucky enough that most of the bourgeoisie left the country. They lost by forfeit. But it’s a good thing to realize that today, sixty years on, what bothers and pisses off imperialists everywhere the most is that they don’t have a way to deal with the Cuban system, because they lost all handles on our reality.

Seeing what has happened in Bolivia, what happened before in Argentina and Brazil, what is happening in Venezuela, we should be nothing but glad we were lucky enough to have had our history, for having eradicated that scaffolding of liberal bourgeois democracy, a system warped to the benefit of classes which, when push comes to shove, fail to respect their own democracy and at the drop of a hat show their fascist side.

I’m not saying the current Cuban system is perfect. We have major problems which must be overcome. But we should not get too excited about the models of democracy we see in other countries. We also cannot fail to value the cultural aggregate of our recent history. Something as simple as the fact one can talk to a lieutenant colonel at a bus stop, speaks about armed forces which are popular. It may not all be perfect, but they are not detached from the people. That’s a utopia elsewhere in Latin America.

Imagination is needed. Whatever we change in our country must be through socialism. We must materialize that which was only outlined. We must add what was forgotten. We must build the socialist and popular democracy we’ve spoken about so much.

Of course we need to have the rule of law. But justice must come from the heart of the people. It cannot come from those professional and class-minded mafias which treat Latin American countries brutally. We need popular and independent courts of law. It might be a good idea to remember ancient times, and how justice worked in the polis of Athens or in the Roman republic, as well as the experience of the Paris Commune.

We cannot abandon the idea of popular armed forces. Above all, we must rescue Fidel’s idea of popular militia. An army which is the people itself at arms, so no one may snatch away its destiny.

We need transparency and participation in communication. The archaic system of our printed press is an aberration which must be abandoned. Fortunately, the digital world signals the birth of a new sun, with citizen participation and electronic government. At the same time, faced with media empires of capitalist propaganda, we must boost the use of public media by the citizens themselves, as well as the creation of networks and counter-hegemonic media.

There’s a need for democracy, but it must be focused mainly on the economy. We must empower groups of workers. We have the self-management experience of Yugoslavia as an example. The plan must be negotiated collectively, with the participation of all sectors of the economy: public, cooperative and private, with unions and political authorities at the table. There should be an Economic Parliament which works all year long.

We need pluralism, the historical failed subject of socialism. But it makes no sense that, in a society in socialist transition, this should be attained through a multi-party system. Competition between parties, based on money and propaganda, is the playing field of the bourgeoisie. Instead, there should be empowerment of grassroots spaces, and a practice of pluralism at the base. We should ‘say everything’, ‘look for trouble’. We must allow plurality of programs in elected officials, and supply power and budgets to those officials so they may solve problems.

With the concerted efforts of us all, we must find a truly revolutionary path in present-day Cuba. But it is my firm conviction that such a path does not go through restoring the liberal bourgeois democracy. Count me out of that. Today we witness what’s happened in Bolivia. That’s a violent restoration, in a country where the changes were not that radical. Can you imagine what those who advocate oligarchy and imperialism would do in Cuba if the platform for their accession to power were created?

Accepting the concepts of the enemy is the first step in recognizing a moral superiority it doesn’t have; it is the path to self-blaming, and the gateway to defeat and death. •

This article first published on the Joven Cuba.com website.

Yassel A. Padrón Kunakbaeva is a Marxist philosopher, revolutionary activist. He writes for La Joven Cuba.