Demands from the Workers of Chile

The uprisings that continue in Chile began as a student protest against a proposed fare increase for public transport. It quickly evolved into a general wave of protest against the government of Sebastián Piñera and all the mounting grievances of neoliberalism – horrible working conditions, social inequalities, privatizations, a negligible welfare state, and more. The government declared a state of emergency and curfew, deployed the military and unleashed a wave of fierce violence against the protests, killing many and detaining thousands. The Chilean national trade union movement, Central Unitaria de Trabajadores de Chile (CUT-Chile), has been part of broad fronts of groups aligned against the government. Its so-called Union Bloc has produced the following set of demands. For further information see “The Awakening of Chile” and on Facebook and Twitter.

Chile faces the deepest social and political crisis since the return to democracy. All who celebrated the end of the Dictatorship in the streets, celebrated not only the exit of the dictator, but the hope of moving toward a full democracy with more rights and social justice. However, after more than 30 years of waiting for this process, they have ended up transforming hope into rage, with the obvious distance that has gone generating between the so-called ‘citizenship’ and the ‘politicians’, with electoral processes less and less participatory and with massive mobilizations that have not implied changes in the lives of Chileans.

The demonstrations lived in 2006 (Penguin Revolution) and 2011 for the right to education, managed to mobilize millions; mobilizations that were replicated, years later, in the massive marches for the end of the AFPs (Administradoras de Fondos de Pensiones). However, today we continue to fight to ensure the right to free and quality education, and is being discussed in Parliament a bill that, instead of ending the current pension system, deepens and strengthens it. In addition to this is discontent in the face of abuse, corruption and inequalities, not only of income, but also of privileges and of treatment millions of workers live every day. 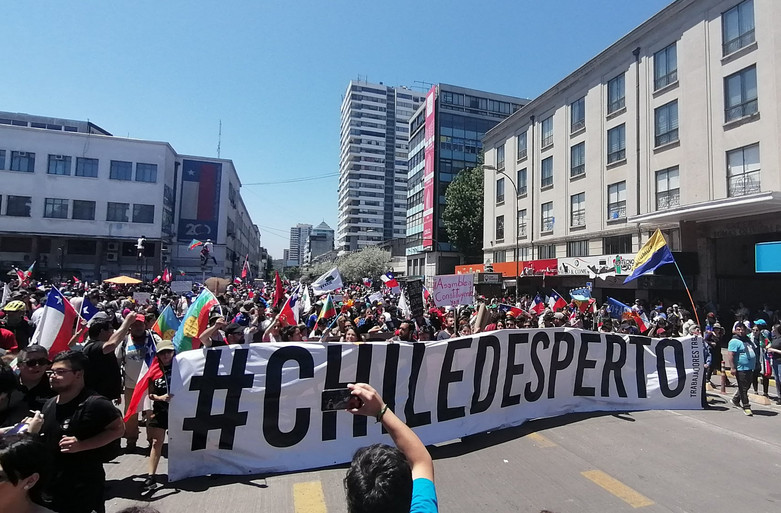 The crisis in Chile is not about ‘public order’, it is a crisis of social fracture, expectations and unkept promises. It is a crisis before a deeply unequal economic system. The State’s response cannot only be social control and security, there are required political responses that defeat the logic of Neoliberalism and commodification in order to recover trust.

The trade union organizations, grouped in Social Unit, urge political parties and parliamentarians to gather approaches of the social movement and face in an effective way the social and political crisis in progress.

Chile is not at war, Chile wants peace, but a true and lasting peace can only be with social justice and defending the democracy that cost us so much to recover.

We also call on the National Congress not to continue with the processing of the Law projects promoted by the Government. You cannot say that there is a will to dialogue and force parliament to legislate, without debate, the bills that have been permanently rejected by trade union and social organizations, included therein, our call not to ratify by the Senate the TPP 11.

Today is the minute for the opposition, which has a majority in parliament, to act accordingly to the institutional crisis we are facing.

Before authorities that do not measure the serious crisis we face, as a union bloc of social unity we summon them to pronounce them over a fundamental rights agenda that really represent the people of Chile. This is not about asking apologies for years of deafness, nor for assuming payment of fair wages. Years of abuse and collusion, are not resolved only with good intentions. It is about advancing in effective social justice.

1. Immediate discussion of a national minimum wage of $500,000 liquid funds for public and private workers.

For years we have demanded the designing of a Salary Policy for Chile that effectively allow each family to live on their salary. In addition to setting a cap to high incomes and to end the wage gaps between men and women.

This is a complementary mechanism to advance in the reduction of inequality of income for our country, but cannot replace the full and effective right to negotiate by branch, which is the mechanism par excellence to contain and overcome the economic inequality. Regarding the public sector, this demand does not replace the negotiation of the public sector table that year after year negotiates with the authority.

The minimum wage must be enough to get workers and their families out of poverty. According to Casen 2017, poorest households in the country are characterized by families where one person works and lives on average 6 people, in the first decile and 4 people in the second decile. If we want to get this population out of poverty through work, it is appropriate to use 5 lines of poverty, which is equivalent to $510,000 liquid funds.

2. Full Recognition of Freedom of Association: Collective Bargaining by branch and Respect for the Right to Strike as a fundamental right.

If we assume as the great conflict in Chile the social fracture, product of the contribution that we make the workers to the development of Chile versus the remuneration to this contribution in terms of salaries and social protection, it is clear that we are very far. We do not intend for everything to be resolved by the State. Therefore, to advance in mechanisms of effective redistribution of wealth, we must strengthen the Collective Bargaining at all levels, being the counterparts of the world of work the ones called to build effective social dialogue. End of all limitations to the effective exercise of the right to strike (strategic companies, minimum services and necessary adjustments).

Terminate outsourcing as a form of precarious employment.

3. Minimum pension equivalent to the minimum wage we propose

The decent pension debate cannot be limited only to the increase in Basic Pension Solidarity (financed by the State). The true Security System that is required today is represented in the proposal of the Coordinator No + AFP, which immediately ensures – through a bill – a minimum pension that is not less than the minimum wage of $500,000 we propose.

Facing inequalities and abuses does not only mean paying off the debt you have with workers in income matters. It is necessary to set a cap for tariffs of essential services. This must assure that no expenses in paying services, must be greater than 15% of the minimum wage. Whereas companies are the main water consumers (95%), the cost of that consumption must be higher in order to finance, with that difference, part of domestic consumption. This, as an immediate measure, while discussing a new constitution that resolves whether essential services such as those mentioned in this basic basket can continue in private hands or must be controlled by the State.

We need a unique transportation system, which considers all means: roads, highways, buses, subway and trains. We are near the end of the concession contracts of highways and roads, with the possibility that your administration returns to the State and, therefore, the social benefit is imposed over profits. In addition, we need an integrated transport system, which ensures quality, reliability, mobility and tariff to all Chileans.

Public transport must be considered a right, within the framework of territorially unequal cities. In front of the millionaire subsidies that the State gives, it is necessary that these resources have an impact on the reduction of the transport rate.

6. Reduction of the Working Day

In relation to working hours, we believe that Chile is in a position to reduce the working day to 40 hours or less, because the social and labour effects are widely beneficial for our country.

International experience and widely known studies support the fact that the working hours are too long in our country and that developed countries tend to work 36 hours.

However, the reduction of the working day cannot be a way for flexible labour (precariousness) proposed by the Government, so the National Congress should approve such reduction without any element of flexibility.

The full right and access to health, education and housing for the entire population must be the first priority of the State. This must be done through the prioritization of public systems with adequate financing and allowing free access. Immediately, you must end the profit and business with these social rights and must establish real spaces for participation in their management. A similar logic must be established for all fundamental social rights.

Permanent demilitarization of the national territory. Investigation, trial and punishment of human rights violations that have been exercised during the so-called ‘State of exception’, a state of emergency widely transgressed at the time with the twenty deaths that we have reported, the more than 3,000 arrests, and the more than one hundred compatriots and migrants with eye injuries and loss of vision, from the excessive use of force. Chile can no longer afford to transform the violation of human rights into the mechanism to inhibit the difference and impose policies, as occurred in the dictatorship.

The year 2020 is foreseen as one of the most difficult years since the great crisis of 2008; the commercial war unleashed internationally will lower world growth expectations by 1 per cent and that of Chile by 0.5 per cent, but we must also add to this the nation’s budget that does little and nothing to revive the economy. Thus, we call for the 2020 public budget to be discussed with an eye on the protection of social rights of Chileans. We need a budget with social and economic priorities, to reduce the country’s inequality.

The budget presented this year has the least growth since 2003, it is necessary to at least double the growth to 6 per cent, and concentrate this increase, in public investment with high impact on the creation of employment and public goods.

Chile’s debt to the workers is not just a debt over rights, it is also of minimum democratic guarantees. We are invited to participate in the electoral processes such as the great space to exercise our voice and sovereignty, but over the most relevant projects for the future of our lives – such as education, health, housing, pensions, salaries – we have no direct participatory space. Today it is necessary to deepen democracy with more rights, but also with mechanisms of effective participation, that enhances citizenship with politics.

To build a New Social Pact, it is not enough to achieve ‘agreements’. Discussing a New Social Pact is to build a new Constitution among all, considering the most wide participation. And the only mechanism that allows us to open the doors to all feeling called and challenged is through a Constituent Assembly.

We are aware that no actor, social or political, can and should not attribute the representativeness or spokesperson of the mobilized social majorities, but with that same clarity we point out that we will not allow agreements between four walls to be imposed, shielded in which there are no clear ‘proposals’ after social mobilization. •