The Canadian Election and Palestinian Solidarity

Voting in elections in liberal democracies even at the best of times has always been the most limited of the many forms of political engagement and struggle. In matters of foreign policy, the ballot is even more gestural in that the political hegemony of the dominant classes is critically fused and enforced by a political consensus that stretches from the conservative right through liberalism to the mainstream social democratic left over inter-state relations and international alliances. Nowhere is this consensus more confined and policed by the parliamentary and ideological apparatuses of the state, elite networks, and the capitalist media than with respect to the Middle East and particularly the politics of Israel and the occupation and oppression of the Palestinian people. This has been the importance for the international solidarity movement with Palestine of the Boycott, Divestment, Sanctions (BDS) campaign. It has widened the space in Canada and other states for discussion of the continued Israeli occupation, house demolitions, apartheid practices, and ethnic cleansing of Palestine.

Still, the federal election in Canada allows Palestine solidarity activists to engage in the election around the Israeli occupation and human rights violations and the complicity of the Canadian state, and use the vote as best they can. While having our differences with some of these assessments (and of these assessments as a whole as a form of engagement and political struggle), we present here the recent calls and appraisals from an array of Palestinian groups on the vote in the current Canadian election.

#IVotePalestine: For Freedom, Justice and Equality 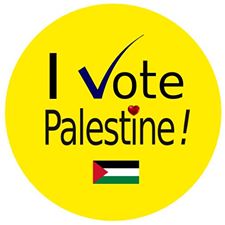 In the upcoming Canadian general election scheduled for October 21, 2019, we commit to vote for candidates and parties that:

Here are the hosts and endorsers of the campaign:

Canadian political parties have launched their campaigns for the country’s 21 October general election. But voters looking to cast a ballot in support of Palestinian rights will be out of luck when it comes to the main parties – Prime Minister Justin Trudeau’s Liberals, and the main opposition Conservatives.

Canadians for Justice and Peace in the Middle East has published a voters guide grading party positions on Palestine and other regional issues. 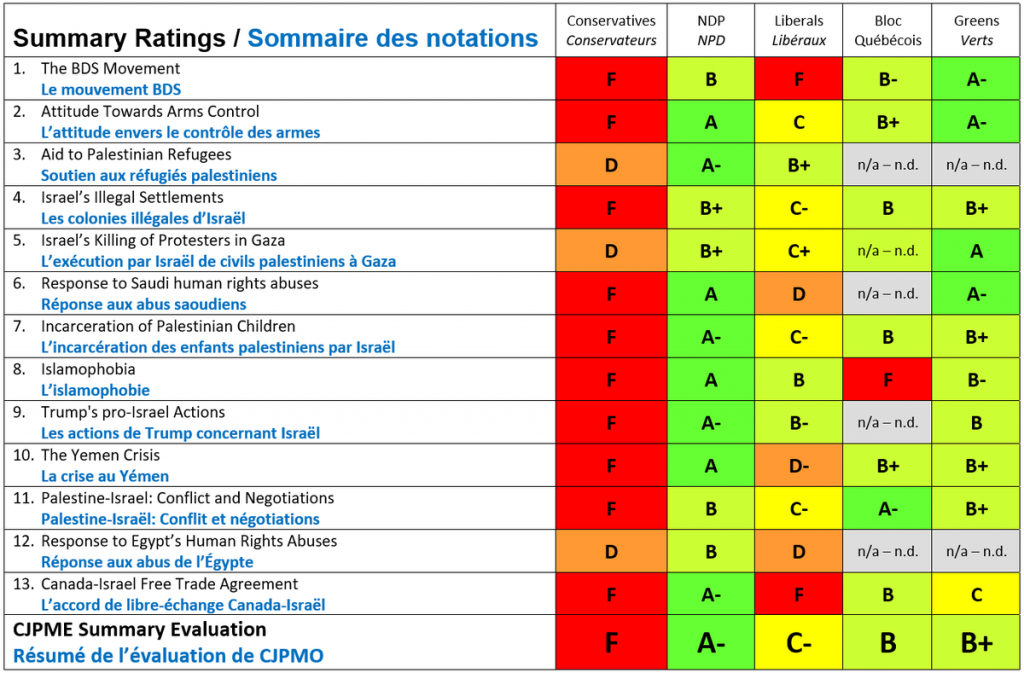 The Conservatives come out worst, with an F overall and failing grades in 10 out of 13 policy areas.

CJPME gives the centrist New Democratic Party an A-, the best overall grade, while the Greens get a B+.

The Liberals manage a C- overall, but get an F for their position on BDS – the boycott, divestment and sanctions movement for Palestinian rights. The Liberal Party also gets an F on the recently renewed Canada-Israel Free Trade Agreement. The highest grade achieved by the Liberals is a B+, for its position on aid to Palestinian refugees.

But Trudeau’s party gets C grades for its response to Israel’s killing of unarmed protesters in Gaza and Israel’s incarceration of Palestinian children. The Liberals also score lowly D grades for their positions on the war in Yemen, and human rights abuses by Egypt’s military regime and the Saudi monarchy.

At a televised leaders’ debate on Thursday night, Conservative leader Andrew Scheer demonstrated why his party got failing grades on Palestinian rights.

According to Canadians for Justice and Peace in the Middle East, “no Canadian political party fully supports BDS, although the reaction and tone vis-à-vis the movement varies somewhat amongst the parties.” The group says the Liberal and Conservative positions “are the most extreme, falsely equating the BDS movement to a form of anti-Semitism, and condemning Canadians who support nonviolent pressure tactics against Israel.”

CJPME awards the Greens “the highest mark, despite not explicitly endorsing the BDS movement.” The Greens do however “support boycotts, divestment and sanctions against Israel until it respects international law.”

Individual New Democratic Party lawmakers, including leader Jagmeet Singh, “have expressed their willingness to consider economic sanctions against Israel,” according to CJPME. But the NDP as a party “has rejected any type of BDS-related action.”

The Quebec nationalist Bloc Québecois has not taken an explicit position on BDS. But CJPME says that it was able to find BQ statements “supporting the objectives of the BDS movement.”

On the eve of the campaign, the Trudeau government announced it was appealing a court decision barring the sale of wines from Israeli settlements in the occupied West Bank labeled as “Made in Israel.” Critics see this decision as pre-election pandering to Israel lobby groups.

The Liberal Party also dropped a parliamentary candidate in Quebec after an Israel lobby group smeared him as an anti-Semite because he criticized Israel.

Meanwhile, despite their relatively favorable score, the Greens have come in for strong criticism from the party’s former justice spokesperson. In 2016 Dimitri Lascaris was fired from that position by Green Party leader Elizabeth May after he signed on to an article supporting BDS.

“Elizabeth May is perfectly fine with candidates and MPs exercising freedom of conscience – except when their conscience dictates that they call for Israel to be held accountable for its heinous crimes,” he added.

In 2015, the Liberals regained power from the Conservatives in a landslide. But Trudeau’s scandal-hit government is facing a tough battle to retain its parliamentary majority.

Opinion polls currently put the Liberals and Conservatives neck and neck at about 34 per cent each. The NDP is at about 13 per cent and the Greens – who are hoping for a breakthrough – are at 11 per cent. •

Ali Hasan Abunimah is a Palestinian-American journalist who has been described as “the leading American proponent of a one-state solution to the Israeli–Palestinian conflict.”

This article first published on the The Electronic Intifada.net website.

Canadian voting pattern on Palestinian Refugees by the Harper and Trudeau Governments at the United Nations (UN) 2013-2018 (organized by subject heading). 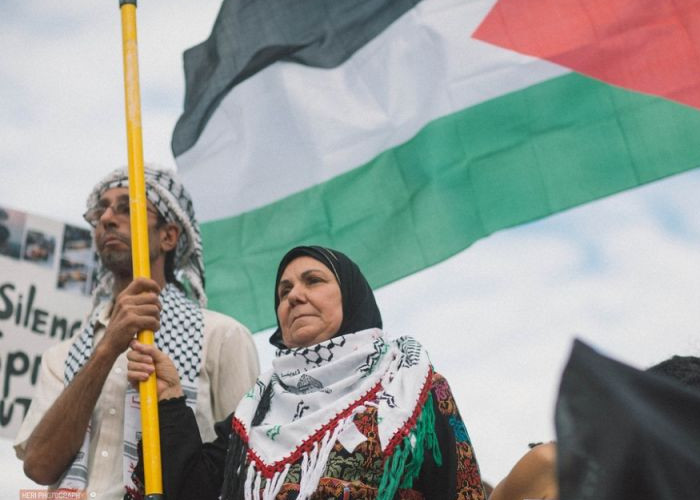 Palestine refugees’ properties and their revenues