Announced in the Ontario Budget, the Ford government’s reckless new market-based approach to funding postsecondary education will fundamentally compromise the integrity of Ontario’s higher education system. This alarming shift in education funding will create greater inequity, hurt students, and threaten the quality of education in our province. 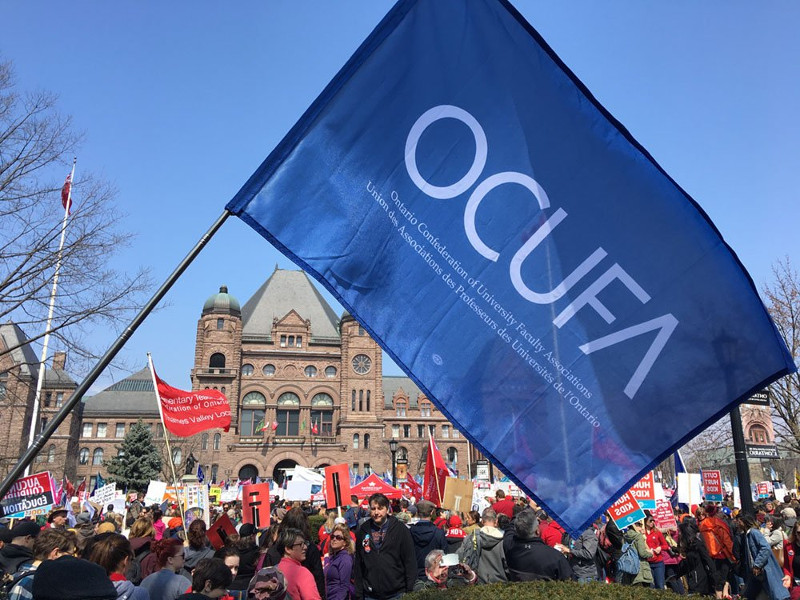 The proposed market-based performance funding model will tie 60 per cent (over $3-billion dollars) of postsecondary funding to each institution’s “performance” against a set of arbitrary and flawed metrics. This dramatic shift follows years of stagnant public funding for postsecondary education in Ontario, and is only the latest in a series of attacks on the foundations of postsecondary education in the province, including cuts of over $400-million to college and university budgets, cuts of almost $700-million to student financial assistance, and cuts to the democratically determined student fees that allow students’ unions to advocate on behalf of, and provide vital support to their members.

Universities and colleges are unique spaces created to facilitate advanced education and research. They are publicly funded because they produce a vital public good: new knowledge and understanding of the natural and social world.

Postsecondary education is an essential extension of Ontario’s exceptional public education system, which is founded on a holistic approach to developing the human mind; it provides a far greater benefit than simply training students for the workforce. The province’s longstanding commitment to advanced education and research has fostered generations of curious, critical, and creative citizens, while consistently producing innovative and ground-breaking research and solutions to society’s most pressing problems.

Unfortunately, the narrow-minded Ford government does not seem to understand the purpose of postsecondary institutions. They believe colleges and universities exist solely to produce workers and intellectual property for profit-driven corporations.

Without any consultation with sector stakeholders, this government is ignoring sound public policy and imposing its own reckless ideological framework on Ontario’s postsecondary education system. The results will be devastating.

This reckless approach to funding provides only the illusion of accountability, but is a very real threat to equity, accessibility, and the quality of postsecondary education. It will work against quality improvement and punish students studying at institutions that have already had their budgets reduced by the Ford government. And it will do nothing to improve accountability, as Ontario’s universities and colleges already have comprehensive structures in place to evaluate the effectiveness of the programs they offer.

A wide body of research shows that performance funding is incapable of credibly reflecting the breadth and depth of a student’s education, the long-term benefits of basic research projects, or the contributions of a faculty or staff member. Instead, research shows that this funding model is far more likely to have negative consequences – slowly but certainly eroding the integrity of Ontario’s postsecondary education system.

Examining evidence from numerous studies in other jurisdictions where this funding approach has been introduced, the dangers are clear that performance funding is likely to:

It is universally understood that an effective postsecondary education system requires universities and colleges to be kept at arm’s length from government and partisan political agendas. By imposing their ideological fantasies on postsecondary education, the Ford government will disrupt the basic knowledge creation process in the academy, limit the capacity of students and researchers to innovate, and stall one of the vital economic engines for this province and its communities.

Rather than engaging in risky and destabilizing changes to Ontario’s postsecondary education funding formula, the government should instead put students first and invest in the province’s colleges and universities. Evidence shows that, even in the absence of explicit performance goals or financial incentives, completion rates increase when institutions receive additional resources. Unfortunately, Ontario continues to rank last in Canada in per-student funding.

Higher education should foster creative, curious, and critical minds. It should provide students with the support, opportunity, and inspiration to push forward in the quest for knowledge and understanding. Performance-based funding measures undermine these values and the very purpose of postsecondary institutions.

Ontario’s university and college students, faculty, and staff are committed to working side-by-side to resist the Ford government’s reckless attacks on our postsecondary education system. Together, we will continue our efforts to cultivate a high-quality, equitable education system that fosters young minds, innovative research, and good jobs. We call on the government and MPPs of all political stripes to reject this reckless and dangerous new funding model and, instead, to invest in Ontario’s postsecondary education system so that it can thrive. •

In April 2019, as part of its first budget, the Ontario government introduced an alarming change to the funding model of public universities and colleges in the province. By 2024-25, this new approach will tie 60 per cent (over $3-billion dollars) of funding for postsecondary institutions to “outcomes” or “performance” measures. Institutions’ so-called “performance” will be assessed against a set of arbitrary metrics determined by the Ford government without any consultation with sector stakeholders, including faculty and students. The proposed metrics do not reflect the needs, priorities, or realities of our postsecondary system.

OCUFA has long cautioned against the negative impacts of performance-based funding models. In particular, we are extremely concerned about the consequences of this newly proposed plan on the accessibility and quality of education in the province, specifically its likely negative impact on the most marginalized groups in our communities.

This change to the funding model follows years of stagnation in public funding for postsecondary education in Ontario. The chronic underfunding of universities has left Ontario behind all other provinces in the country in terms of per-student funding. Yet, instead of making meaningful investments toward a more equitable and accessible postsecondary education system, the government has opted for an inequitable, unnecessary, and destabilizing change to the primary instrument for funding universities.

Research on other jurisdictions where performance-based funding models have been implemented has repeatedly demonstrated that these approaches to funding do not meet their set objectives. Rather, in many cases, they leave severe negative impacts on equity and accessibility of educational institutions.

We are troubled by the reductive, flawed and inequitable set of metrics the government has proposed and the adverse effects they will have on universities. For example, a recent study in the United States has shown that minority-serving institutions, when compared to larger research schools, are more negatively impacted by performance-based funding models. This often results in these minority serving institutions shifting their focus away from serving minority students in order to secure more funding.1

The new Ontario funding model puts forward 10 metrics, down from the 28 proposed by the previous government, against which the “performance” of a university or college will be measured. These newly proposed metrics are almost solely focused on economic measures and labour market demands, which will likely institutionalize existing social inequities. They include no measures of teaching, research, or social impact of universities, all of which are essential to universities’ missions and mandates. These impacts cannot simply be measured through economic contributions, but must also take into account the contribution of postsecondary education to building knowledge, fostering innovative and critical thinking minds, and creating more equitable and inclusive societies.

One of the 10 proposed metrics is “graduate earnings,” which is the level of salary and compensation graduates would receive after graduation. This measure is inherently biased as salaries and earnings are market-driven variables that change based on a number of factors, none of which universities control. From an equity perspective, the labour market values professions differently. Woman-dominated professions, such as teaching, childcare, and nursing, are commonly paid less than male-dominated fields such as business and engineering. Moreover, it is also well documented that hiring practices are not free from discrimination on protected grounds such as race, immigration, disability status, and sexuality, and there are evident pay gaps within most professions for marginalized groups, including women, racialized and Indigenous peoples, and those who experience disabilities.

Therefore, using graduate earnings in the first year following graduation to determine a university’s funding level could have significant negative consequences for the programming and strategic planning of an institution. It would likely incentivize universities to tailor their academic planning to the whims of the labour market, potentially favouring certain high-salaried professions and their related academic programs and departments, at the expense of others. In addition, if graduates from marginalized groups face discriminatory hiring practices and suffer the consequences of existing pay gaps, then the structure of the performance-based funding model actually encourages universities to deny or limit access to individuals who are members of equity-seeking groups.

Another proposed metric under the new model is “graduate employment”, defined as the “proportion of graduates employed full-time in related or partially related field.” This metric is proposed at a time when there is clear evidence that full-time employment is on the decline while precarious employment is on the rise. Given already existing biases in hiring, the evidence is clear that individuals from marginalized groups are more likely to be employed in part-time, precarious positions. Thus, the proposed metric of full-time graduate employment further incentivizes universities to admit fewer and fewer students from these groups.

A third metric introduced under this proposed funding model is “graduation rates”. This metric has well-documented adverse consequences especially for the equity, accessibility, and quality of an education system. When graduation rates become a factor in determining a university’s share of public funding, universities are likely to shift grading and admissions policies and practices over time, and/or to reduce their requirements and lower their standards for graduation. This includes changes to admission requirements that discourage admitting students who may require greater support or accommodations in order to complete their degrees. This could significantly limit some students’ access to postsecondary education, including students with accessibility and accommodation needs, and part-time students who require more time to complete their degrees due to childcare duties, eldercare responsibilities or financial considerations, among other “non-traditional” student groups. Assumptions about which students are more likely to move through their degrees quickly and to require fewer institutional resources will drive admission decisions designed to boost a university’s performance statistics. Thus, performance-based funding and metrics hinder access to higher education, especially for marginalized students, and penalize universities that seek to enroll traditionally under-represented students.

The new funding model introduced by the Ford government, including the highly problematic set of metrics, will destabilize our postsecondary education system and harm the quality and accessibility of university and college education in Ontario. It will, by design, disadvantage students who are already marginalized and institutions that are already under-resourced.

We urge the government to reverse these unnecessary and harmful changes to the province’s funding model. Instead, we call on the government to meaningfully invest in Ontario’s chronically underfunded postsecondary education system and provide our public institutions with the means to offer a high quality, and equitable higher education experience that is accessible to all. •

The Ontario Universities and Colleges Coalition (OUCC) represents over 435,000 faculty, staff, and students from every public postsecondary institution in Ontario.

The Ontario Confederation of University Faculty Associations is the voice of 17,000 university faculty and academic librarians across Ontario. We seek to maintain and enhance the quality of our province’s higher education system, and to advance the professional and economic interests of our members.