What you Need to Know About May Day

For more than 100 years, May Day has symbolized the common struggles of workers around the globe. Why is it largely ignored in North America? The answer lies in part in American labour’s long repression of its own radical past, out of which international May Day was actually born a century ago. 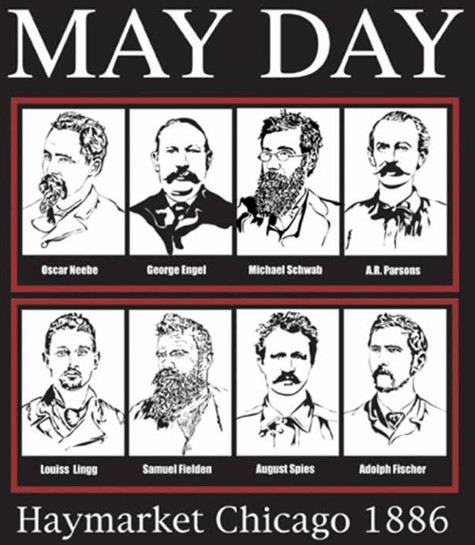 The seeds were sown in the campaign for the eight-hour work day. On May 1, 1886, hundreds of thousands of North American workers mobilized to strike. In Chicago, the demonstration spilled over into support for workers at a major farm-implements factory who’d been locked out for union activities. On May 3, during a pitched battle between picketers and scabs, police shot two workers. At a protest rally in Haymarket Square the next day, a bomb was tossed into the police ranks and police directed their fire indiscriminately at the crowd. Eight anarchist leaders were arrested, tried and sentenced to death (three were later pardoned).

These events triggered international protests, and in 1889, the first congress of the new socialist parties associated with the Second International (the successor to the First International organized by Karl Marx in the 1860s) called on workers everywhere to join in an annual one-day strike on May 1 – not so much to demand specific reforms as an annual demonstration of labour solidarity and working-class power. May Day was both a product of, and an element in, the rapid growth of new mass working-class parties of Europe – which soon forced official recognition by employers and governments of this “workers’ holiday.”

But the American Federation of Labor (AFL), chastened by the “red scare” that followed the Haymarket events, went along with those who opposed May Day observances. Instead, in 1894, the AFL embraced president Grover Cleveland’s decree that the first Monday of September would be the annual Labor Day. The Canadian government of Sir Robert Thompson enacted identical Labour Day legislation a month later.

Ever since, May Day and Labour Day have represented in North America the two faces of working-class political tradition, one symbolizing its revolutionary potential, the other its long search for reform and respectability. With the support of the state and business, the latter has predominated – but the more radical tradition has never been entirely suppressed.

This radical May Day tradition is nowhere better captured than in Bryan Palmer’s monumental book, Cultures of Darkness: Night Travels in the Histories of Transgression [From Medieval to Modern] (Monthly Review Press, 2000). Palmer, one of Canada’s foremost Marxist labour historians, has done more than anyone to recover and analyze the cultures of resistance that working people developed in practicing class struggle from below. He’s strongly critical of labour-movement leaders who’ve appealed to those elements of working-class culture that crave ersatz bourgeois respectability.

Set amid chapters on peasants and witches in late feudalism, on pirates and slaves during the rise of mercantile imperialism, on fraternal lodge members and anarchists in the new cities of industrial capitalism, on lesbians, homosexuals and communists under fascism, and on the mafia, youth gangs and race riots, jazz, beats and bohemians in modern U.S. capitalism, are two chapters that brilliantly tell the story of May Day. One locates Haymarket in the context of the Victorian bourgeoisie’s fears of what they called the “dangerous classes.” This account confirms the central role of the “anarcho-communist movement in Chicago [which] was blessed with talented leaders, dedicated ranks and the most active left-wing press in the country. The dangerous classes were becoming truly dangerous.”

The other chapter, a survey of “Festivals of Revolution,” locates “the celebratory May Day, a festive seizure of working-class initiative that encompassed demands for shorter hours, improvement in conditions, and socialist agitation and organization” against the backdrop of the traditional spring calendar of class confrontation.

Over the past century communist revolutions were made in the name of the working class, and social democratic parties were often elected into government. In their different ways, both turned May Day to the purposes of the state. Before the 20th century was out the communist regimes imploded in internal contradictions between authoritarianism and the democratic purpose of socialism, while most social democratic ones, trapped in the internal contradictions between the welfare state and increasingly powerful capital markets, accommodated to neoliberalism and become openly disdainful of “old labour.”

As for the United States, the tragic legacy of the repression of its radical labour past is an increasingly de-unionized working class mobilized by fundamentalist Christian churches. Canada, with its NDP and 30 per cent unionized labour force, looks good by comparison.

Working classes have suffered defeat after defeat in this era of capitalist globalization. But they’re also in the process of being transformed: The decimated industrial proletariat of the global North is being replaced by a bigger industrial proletariat in the global South. In both regions, a new working class is still being formed in the new service and communication sectors spawned by global capitalism (where the eight-hour day is often unknown). Union movements and workers’ parties from Poland to Korea to South Africa to Brazil have been spawned in the past 20 years. Two more book out of Monthly Review Press – Ursula Huw’s The Making of a Cybertariat (2003) and the late Daniel Singer’s Whose Millennium? Theirs or Ours? (1999) – don’t deal with May Day per se, but capture particularly well this global economic and political transformation. They tell much that is sober yet inspiring about why May I still symbolizes the struggle for a future beyond capitalism rather than just a homage to the struggles of the past. •