Humankind has reached a moment of existential crisis. Human activity is causing disastrous climate disruption and Earth’s sixth mass extinction event, triggering critical losses of biodiversity. We are already locked in for global warming that will have catastrophic effects, and we are on a slippery path to our own extinction. The 2018 Special Report from the Intergovernmental Panel on Climate Change (IPCC) warns unequivocally that “without societal transformation and rapid implementation of ambitious greenhouse gas reduction measures, pathways to limiting warming to 1.5°C and achieving sustainable development will be exceedingly difficult, if not impossible, to achieve.” 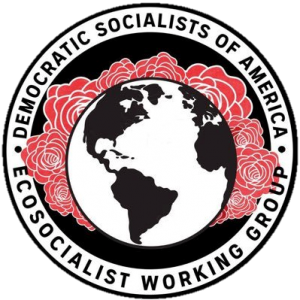 Yet, the crisis we face exceeds ecological breakdown. Deepening inequality, suppressed democracy, precarious jobs, racial and gendered violence, border hostility, and endless wars make up the terrain on which climate destabilization will be unleashed. The most vulnerable members of society will be hit hardest, first, and suffer most.

We must solve the climate crisis and the inequality crisis together. Climate remedies in the context of austerity will produce a popular backlash, as we see in the yellow vest protests against a fuel tax. Corporations profiting from fossil extraction have long worked to turn workers against environmentalists, claiming that clean energy would be a job killer. But working class and poor people’s quality of life, gravely threatened by climate disruption, would greatly improve in a just transition. Because corporate capitalism rewards extraction to concentrate wealth, it must be replaced by a sustainable economy. A Green New Deal can begin the transition from exploitative capitalism to democratic ecological socialism.

The urgency and scale of the crisis we face demand solutions that meet the magnitude of this moment. The ineffectual gradualism and corporate obedience demonstrated by the U.S. government’s climate response has proven to be a dead-end for humanity. We need rapid, systemic transformation that heals the stratification of wealth and power while putting decarbonization and justice at the forefront.

We need a Green New Deal

We demand a Green New Deal, and we demand that it serve people and planet – not profit.

For too long, our livelihoods have been undermined by the pursuit of profit. Land expropriation, mass murder, and slavery on a vast scale built the great fortunes, the markets in cotton and industrial goods, and the system of finance and extraction that are with us today. Their legacy is plain to see. People are starving while we throw away food. Buildings are empty while people sleep on the streets. Working class communities, especially those of color, are being poisoned by polluting industries that are wrecking the climate, all for the sake of making the rich richer.

We can no longer allow our lives and liberation to be undermined by an extractive system that uproots wealth from nature, communities, workers, and vulnerable peoples, while imposing onto them all of the costs. We will no longer allow corporate monopolies and their political servants to control the resources we need and the outcome of our lives. We demand justice and power for The People to determine our future – a future that belongs to everyone living and yet to live.

Future generations are entitled to a beautiful planet with a vibrant natural world that can sustain a good life for all people. Creating a fully ecological society will require a revolutionary transformation to replace the capitalist social order based on exploitation and oppression with a new society based on cooperation, equity, and justice. A Green New Deal must serve as a bridge toward this future. To that end, we support the resolutions introduced by Rep. Alexandria Ocasio-Cortez in the House and Sen. Ed Markey in the Senate while recognizing that they are conversation starters – not complete and adequate blueprints. Their proposals are facing fierce opposition from corporate politicians and nervous ridicule from Wall Street pundits, but the opportunity to campaign for a radical and effective Green New Deal remains in our hands. Comments by the Climate Justice Alliance (CJA) and the Indigenous Environmental Network (IEN) advance the vision of what a Green New Deal rooted in a truly just transition should look like.

The radical Green New Deal we need will not be introduced in a single bill or resolution – it can only emerge from the grassroots struggles of working people and social movements. Together with our allies, we can organize a powerful multi-faceted movement to catalyze the major left turn in American politics and massive structural changes that are necessary to ensure climate justice and human survival.

Because we see the fight for the climate as a struggle against capitalism itself and the myriad forms of oppression which sustain it, we propose to organize within Democratic Socialists of America (DSA) and without around the following guiding principles for a radical Green New Deal:

1. Decarbonize the economy fully by 2030. We need to set a more ambitious timeframe than the IPCC 1.5°C pathways suggest because of the United States’ historical responsibility for carbon pollution, because highly industrialized societies have the greatest capacity to rapidly reduce emissions and afford the shift from endless fossil-fueled growth to regenerative systems, and because faster decarbonization will give us the greatest chance of avoiding more catastrophic climate tipping points. We must mobilize all carbon-intensive sectors of the economy to eliminate greenhouse gas emissions at the source, and to scale up processes that safely and naturally draw down and remove excess carbon from the atmosphere – not as market-based “offsets” for ongoing emissions, but to begin restoring a safe climate for all.

2. Democratize control over major energy systems and resources. Nationalize fossil fuel producers to phase them out as quickly as necessary – no new fossil fuel projects can be authorized or built. Socialize fossil-dependent industries so that they can be scaled back or transformed to fossil-free processes. Establish public ownership of utilities and the electric grid, and support energy cooperatives and community solar and wind projects for democratic control of the shift to 100% renewable energy. Shift from monoculture and factory farms to diversified agroecology. Expand municipal and state public banks, finance community land trusts, and end water privatization. Reinvest in and expand national parks; vastly expand national forests, grasslands, and wildlife preserves to enable natural carbon capture; and preserve public lands for future generations. Encourage replacement of individually-owned vehicles and short-haul air travel with expanded regional and high-speed electric rail, free public transit, shared vehicles, bicycles and other non-fossil-fuel modes of transportation in ways that benefit disadvantaged communities. The future is a public good, not a private luxury.

3. Center the working class in a just transition to an economy of societal and ecological care. Guarantee a job with union wages and benefits to everyone who wants one by creating millions of public sector jobs and funding massive direct investments to build decarbonized infrastructure in critical sectors like renewable energy, regenerative agriculture, soil and ecosystem restoration, environmental impact mitigation, and climate adaptation while also expanding support for low-carbon care sectors like healthcare, education, and domestic work. Empower workers with stronger labor protections and rights to collectively organize. Promote worker-owned and worker-controlled cooperatives and enterprises at all levels of the economy. Ensure workers’ democratic control over the use of technological innovation and automation at work. Reduce the work week and guarantee substantial, paid parental leave and vacation time for all workers.

4. Decommodify survival by guaranteeing living wages, healthcare, childcare, housing, food, water, energy, public transit, a healthy environment, and other necessities for all. Ensure market forces do not displace frontline and working class communities from their neighborhoods by implementing universal rent control, and work cooperatively with communities in the line of climatic danger to relocate to safer grounds. Make college education free so everyone has access to learning skills that may better facilitate the rapid transition of society. Ensure land and resources are prioritized for building resilient communities and ecosystems for the many, not the few.

5. Reinvent our communities to serve people and planet, not profit. Facilitate the creation of neighborhood transition councils as hubs of distribution, education, participatory planning, and democratic decision-making. Prioritize funding for projects that build community health and wealth, beginning with working class, racialized, and Indigenous communities that are on the frontlines of the climate crisis and collective struggles for environmental justice. Decriminalize, decarcerate, and demilitarize spaces across all areas of society. Legally and materially empower communities to meet human needs in ways that redress social and environmental injustices, including economic, racial, colonial, and gender-based oppression. Work within cities, towns, and rural communities to provide better and more sustainable lives through improved land use, sprawl repair, and support for household and neighborhood downshifting. Fund targeted cleanup efforts to address environmental injustices and meet a demand of clean air, water, and soil for all. Help communities plan resilience and prepare for climate shocks, material shortages, and other consequences of blowing past planetary boundaries.

6. Demilitarize, decolonize, and strive for a future of international solidarity and cooperation. Enact policies and join in treaties to meet the existential threat of climate change and abandon the doomed strategy of global military domination. United States treaty commitments must account for our historical responsibility for the largest total and per capita greenhouse gas emissions, which will drive climate change for generations to come. Build consensus throughout the Global North for decarbonization targets that greatly outpace those of less industrialized countries, which have contributed the least to and will suffer the most from global warming. Welcome refugees, share life-saving technologies freely, and provide mitigation and adaptation resources requested by peoples in the Global South to whom we are materially and energetically indebted. Recognize the sovereignty of Indigenous peoples, with rights to free, prior, and informed consent before activities that will affect their territory or environment. Accept the decisions of Indigenous communities regarding the construction of future green infrastructure projects that impact their lands and the living beings they support. Remove United States military presence, influence, and occupation around the world; end military aid and arms exports; and demilitarize our borders.

7. Redistribute resources from the worst polluters with just and progressive taxes on the rich, on big corporations, and on dirty industry, as well as by diverting funds away from policing, prisons, and our government’s bloated military budget, which have nothing to do with defense of people living within American borders and everything to do with maintaining imperial dominance over other nations and capitalist control of the world’s resources. United States monetary policy has financed endless wars and wealth extraction by elites for long enough – it’s time to use it to fund the transformation we need.

These guiding principles are just a beginning, not an endpoint, for DSA’s engagement in the campaign for a Green New Deal. We agree with the call of CJA to develop a Green New Deal process that is transparent, inclusive, and democratic. We must warn all politicians that we will not accept a watered-down Green New Deal that they exploit as a mere electoral slogan. They will either fight for the radical Green New Deal that emerges from our coalition or be exposed as collaborators with the ecocidal elite who have no concern for our future.

Our role is to help build a militant mass working-class movement that is powerful enough to secure human flourishing for all beyond the critical next decades, not just survival for some. Together, we can break the power of capitalists and guarantee the regeneration of a vibrant natural world that is home for humanity – and all forms of life – for many generations to come. •

Adopted February 28, 2019 by National DSA Ecosocialist Working Group, and published on their website.

The DSA Ecosocialist Working Group's mission is to ensure that the transition to socialism in the United States is based on sound ecological principles. Follow their tweets at @DSA_Enviro.