Fordism and Ontario Universities: College “For the People” Who Can Pay

In 2011, The Quebec Liberal government of Jean Charest decided to hike post-secondary school tuition fees by 75 per cent over a five-year period. This move mobilized students across Quebec and by 2012 a demonstration in Montreal brought out between 100,000 and 200,000 people. About 310,000 out of a total 400,000 students across the province were out on strike. The symbol of their protest was a small red square patch anyone could make and attach with a safety pin. In August 2012, Charest’s government was defeated in an election and the increase was repealed.

Last Monday, several hundred students gathered in the slush in front Queen’s Park. Many of them wore the same small red patches pinned to their coats – the symbol of the fight in Quebec against the tuition fee hike.

The red patch – a fine counter symbol to Tory blue.

There’s a chill on higher education. It’s something students and parents in elementary and secondary schools would do well to watch. 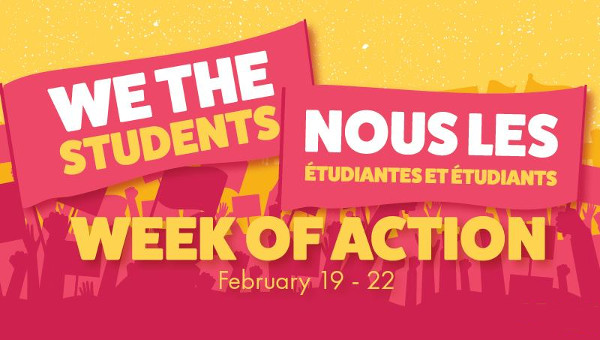 In the middle of January, Doug Ford said he planned to cut tuition fees for post-secondary students by 10 per cent starting September 2019. That would amount to about $340 for a college student and $660 for an arts and science undergraduate in university. This according to his government, was to “keep more money in the pockets of Ontario’s students.”

Well, some of them at least.

It will be a help for students who can already afford to pay the full fare, for example. They get to hang onto that 10 per cent cut in fees. But that’s about the only good news in this story. According to Training Colleges and Universities Minister, Merrilee Fullerton, the government doesn’t plan to make up for the loss of revenue to the post-secondary schools that bear the cut. It’s up to them to come up with a way to cope with the loss of about $440-million – what that tuition fee cut amounts to.

Last June, according to the Globe and Mail, representatives from colleges and universities called on the government to increase funding to universities so they could maintain quality of instruction. The former Liberal government had put a 1 per cent raise in the 2018 budget. Post-secondary institutions are not swimming in money.

Then there’s the matter of the “other shoe dropping.” Mr. Ford didn’t happen to mention right away, that while he was giving a tuition cut with one hand, with the other he was taking away free tuition for lower income students. It’s another of the many “efficiencies” the Tories neglected to specify during the election, but would help enable them to forego funds from the cap and trade agreement while they handed out an income tax cut for some Ontarians.

Families earning up to $140,000 per year qualify for some funding and those earning less than $50,000 could see up to 82 per cent of tuition in the form of grants. But the big change is that many Ontario Student Assistance Plan (OSAP) grants will become loans. Up until now, low-income students could qualify for grants covering all of their tuition.

And along with a 10 per cent drop in tuition fees, comes the same-size slice taken out of any OSAP grant. The bottom line is that lower- and middle-income students will end up paying more for the same education.

NDP Training Colleges and Universities critic, Chris Glover says these changes are “making it easier for the wealthiest students and imposing higher cost and debt on others.” He adds that the government would scrap the six-month debt-free period. As soon as students graduate, they would have to start paying back their loans with no time to get a job and earn some money. In an already expensive world – and one which requires higher education to get any adequately paying job, debt loads will just go up. That debt load is now, on average, $27,000 per student. But it could go as high as $300,000 according to Mr. Glover.

He wrote his PhD thesis on student debt and effects it has on mental health and success in school. Right now, he says, 46 per cent Ontario post-secondary students are in jeopardy of experiencing serous anxiety problems, on the 5-point Mental Health Inventory, due to financial pressures. This in turn can lead students to cut short their education as they look for work to meet living expenses – or simply not do as well in their courses.

At a Queen’s Park demonstration on Monday university students spoke about this. One, a graduate student at University of Toronto, figured that he might need to give up his studies; it was just going to be too expensive to continue on. Another, wearing a red patch to protest the fee hikes, had planned to start teacher’s college soon: “I knew I was going to go to university because the government was going to help me,” he said. But at age 30, with two kids at home, that plan is very much up in the air.

In another twist to this story, Chris Glover points out that Premier Ford wants to allow students to opt out of paying for university groups like student unions, something he thinks is meant to undermine them so students can’t organize to fight further cuts to their education.

Doug Ford’s latest move, like so many others, comes out dressed up in his “for the people banner” and perversely, with a little closer look, is just the opposite. Students, needing to pay for their – now essential – education, do so with reduced minimum wages and increased debts that must be paid sooner.

The question with anything this government does “for the people” should always be: Which people? Increasingly, the answer is: the ones who can afford to pay. •