Taking on the GM Shutdown: Unifor, Oshawa and Community Control

General Motor’s plan to end production at its Oshawa plant at the end of 2019 is a callous, cynical act by the U.S.-based multinational auto giant that needs to be challenged. After accepting $13.7-billion bailout offered by the Canadian public to the big automakers back in 2008 to keep GM and Chrysler alive (one third of which will never be recovered), the company plans will leave 2500 workers at the plant out of work, with perhaps further spinoff losses of jobs and taxes. This is a brutal blow for the home of industrial unionism in Canada and one of the long-time centres of Canadian auto production. 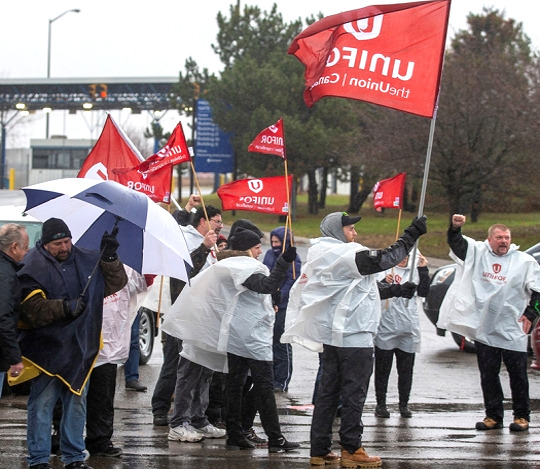 From the point of view of the workers and communities surrounding Oshawa and, indeed, the needs and concerns of the working class across the country, there is no understanding why a place so productive can be shut down. Besides directly attacking the livelihoods and economic futures of workers, the shutdown would eliminate a key component of productive capacities in Canada. There is no reason to close down the facility in Oshawa which has consistently ranked as one of the top plants in the world (and similar doubts could be raised for the four U.S. plants also slated for closure). GM could easily retool these plants, and produce both new electric and hybrid vehicles, as well as the SUVs that are dominating current markets. These plants have rested on the community and labour resources of their communities; if GM doesn’t use this productive capacity, it should be seized as community property and put to other uses.

From the point of view of GM, and the financial markets that back GM up, the closures are part of a brutal corporate strategy to: cut overall costs; to concentrate production in hot selling profit-making trucks and SUVs; and to finance later moves to offshore production of electric vehicles (quite possibly in China as the key growth market for e-vehicles). GM likes to present itself as a ‘responsible’ corporation in an ‘inclusionary capitalism’, dutifully planning for its future while still raising its stock prices in a balanced way at the same time. Given the political climate in the U.S., GM couldn’t only close its American plants.

GM is acting according to the reasoning of big capital in this neoliberal era: there is no regulation of the hyper-competitive auto market, dominated now by multinationals from around the world. It shows the social toxicity and hypocrisy of capitalism. Workers in Canada, the USA or Mexico for that matter, have no democratic control over what is being produced in our countries, or the fate of the productive facilities that produce them. Current governments of all stripes accept the free movement of capital and the domination of large investors in making key economic decisions. Trudeau, Ford and NDP governments are so committed to free trade and the wisdom of the private marketplace, that it is breathtaking to see how they fall over themselves to accept the right of GM to close down Oshawa, and limit themselves to providing Employment Insurance (EI), retraining and such.

Unifor has responded to the shutdowns with much anger and fury, but without any needed strategic direction. Its history of acceptance of corporate attacks and its closeness to the Trudeau Liberals remain problematic. Unifor leaders, both national and local have steadily accepted the closure of key plants in Windsor, London, Oakville and Oshawa and massive layoffs over the past decades. There has been little in the way of any real collective challenge or plant takeovers, tied to demands for state intervention to limit the power of the corporations or public leverage gained for subsidies to the auto companies. Indeed, the union has argued for subsidies and offered collective bargaining concessions (the latest of which in auto resulted in a multi-tiered workforce with respect to new hires), which has done little to stop the steady erosion of the workforce through outsourcing, layoffs or closures. That history has weakened the union.

What’s needed are efforts to provide challenging education programs about the potential for workers to demand that the facilities in which they work produce environmentally responsible products, publicly owned, and not dependent on the whims of the fickle and brutally competitive consumer private vehicle market. Without a leadership that points the way forward and questions the hyper-competitive private marketplace workers remain dependent on corporate employers and look to them to provide for their future.

Workers in Oshawa – and the tens of thousands of those whose jobs are dependent on them – are up against the wall if the GM plant is shutdown. But whether it stays open, is re-converted into community property and sustainable production, or in the worst case, just shutdown and allowed to rust away as one more industrial ruin, workers in Oshawa and Ontario need to become community and political leaders in reversing the direction we’ve been going in. There are no other political forces, and least of all another major corporation, that will be able to insulate our communities from the ravages of capitalist markets and build new forms of economic democracy that point beyond capitalism and endless competition.

The Socialist Project supports serious efforts by the union and the membership to organize collective actions that challenge GM’s decision and calls for new products to be allocated to Oshawa.

We also call for the union to build a movement inside Local 222, the surrounding community and across the union movement and the Canadian working class, to: