Marx’s Capital: three volumes, 2,500 pages. A tome as an organizing tool? For leftists who really can’t do without Marx, there are a lot of his texts that are shorter and address questions of organizing directly. The Communist Manifesto (1848) comes to mind, but also the materials he wrote for the International Working Men’s Association. Whether these texts are still relevant today is debatable but there’s no doubt that generations of socialists read them as guides to working class struggles. 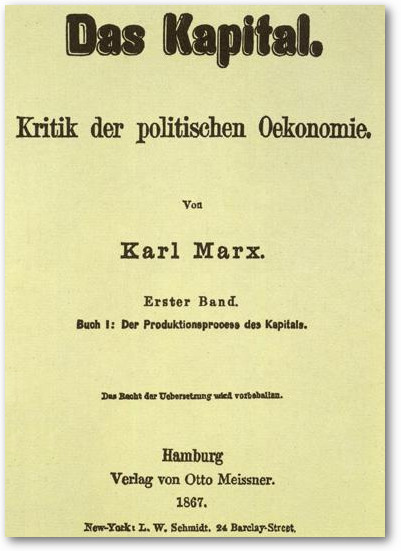 Capital (1867), on the other hand, points at recurrent crises that surely are a nuisance for capitalists but also offer them ways to reinvent and actually expand the rule of capital. Workers gaining higher wages and shorter hours through their struggles? The next crises will surely roll back those gains, the following boom will be driven by the introduction of labour-saving machines that leave workers in a rat-race for any kind of job. All the while, the power of increasingly concentrated capital over society grows. How workers could stand a chance to win the final battle, to which Marx calls them at the end of volume one of Capital, remains totally unclear. Not surprisingly, Capital has found more readers among intellectuals who need an excuse for their absence from protests and picket-lines than among front-line activists. How could it possibly serve as an organizing tool?

The short answer is that Capital isn’t a book of theoretical solutions waiting to be applied in practice but a starting point to make connections between different aspects of capitalist realities, the discontents they produce and the resistance movements rallying around them.

A slightly longer answer starts with the observation that Marxist intellectuals and left activists have one thing in common – isolation. Images of Marxists puttering around their studies and seminar rooms are commonplace but most social movements also rely on a handful of core activists who keep things going between broader mobilizations. Moreover, most of these movements are dedicated to a specific issue. Convergences, if they occur, produce broad and generic slogans that invite a diversity of activists but usually fall apart before they can consolidate into something unified and lasting. This was the case with the ‘another world is possible’ – altermondialistas and the ‘We are the 99%’ Occupy Wall Streeters.

If activists from different movements read Capital together, they could find out that, though mobilizing around different issues, they are up against the same exploitative and oppressive system that, going through boom-and-bust cycles and recurrent reorganizations of labour processes, produces all sorts of hardships for those people it exploits, but also for those it excludes from exploitation. Movements aiming to ease or overcome these hardships are, objectively, connected – by the circuits of capital accumulation. As Capital explains these circuits in their most general forms it can help activists to situate their specific struggles in the larger picture of the capitalist system, and it also allows them to see where other movements fit in. On that basis, common goals and strategies can be fleshed out.

The point of an activist reading of Capital is not to figure out what Marx ‘really’ wanted to say but to use the text as a platform to explore the worlds in which activists now live, work and struggle. Looking through Marx’s abstract lenses allows participants in such reading groups to discover the social relations behind their individual experiences. At the same time, sharing experiences enables the group to put life-world flesh onto Marx’s theoretical framework and thereby develop an empirically saturated understanding of capitalist reality, including the weak links from where it might be unravelled.

Is this too difficult and ambitious? It has been done before. Activists in the Second and Third Internationals read Capital, or popular versions of it, to put various economic and political demands into a larger picture of socialist transformation. That the socialist and communist projects emanating from the two Internationals failed and were followed by a much more fragmented left only means that it is about time to start piecing things together again.

Admittedly, getting into the reading isn’t easy. Marx, when asked for advice by a friend, suggested to skip the first parts dealing with what he called the ‘noisy sphere of circulation’ of commodities and money and start with the labour process. The description and analysis of workers toiling under capitalist control, he argued, reveals the truth about capitalist enrichment on workers’ backs more easily than the exchange of commodities, including labour power, of equal value. However, the fact that equal exchange masks capitalist exploitation and, on top of that, creates the impression that money not just proverbially but in point of fact does make the world go round, are reason enough to start from the start. 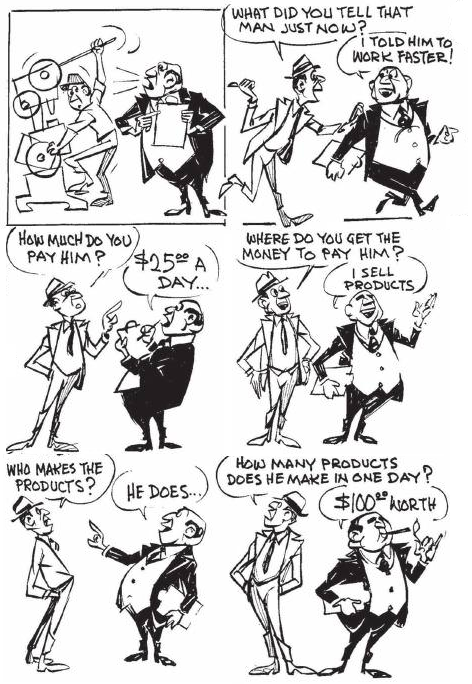 The difficulties Marx had in discovering the secret of capitalist exploitation beneath the noisy spheres of circulation, in the ‘hidden abodes of production’, are the same difficulties that readers of Capital have in seeing through the noisy sphere of circulation. However, addressing these difficulties head on is crucial for lasting organizing efforts as it is precisely the impression of already living in a society of equals, free to trade with each other as they please, that makes such efforts seemingly futile. If true, everybody is free to make a career or not. Only outside disturbances, such as misguided government and union interventions, can prevent individuals from going their own chosen paths.

Understanding that it is actually a small group of people who, regardless of their individual personalities but due to their social position as owners of the means of production, exploit the mass of workers who have nothing to sell but their labour power, is the first step toward overcoming exploitation and oppression. The second step is the making of a working-class movement strong enough to overthrow capitalist rule and build a society based on collective ownership and decision-making. This is the hardest part because the capitalist labour process divides workers as much as it unites them. 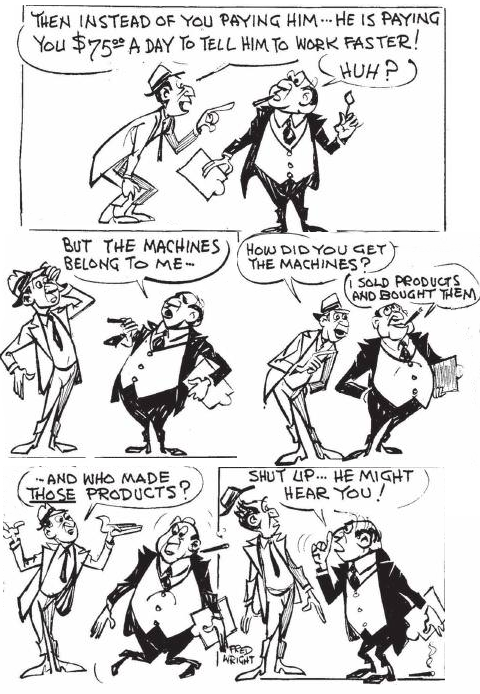 Marx’s empirical basis, 19th century factories in England, may be outdated but his core argument that some groups of workers are granted some privileges while others are stuck with the lowest paid, toughest and most dangerous jobs is as true today as it was in his days. Reserving some job categories for men, others for women and hiring along colour lines creates the impression that there’s something natural about some workers being higher in the pecking order than others. Getting past resentment and infighting among these various groups is a major challenge for union organizers. Making links to anti-poverty activists who try to rally the industrial reserve army that, according to Marx, keeps wages for all workers in check is another challenge.

A third challenge is ecology. Although capitalist production is about workers making money for the capitalists, the way they do this is by transforming natural resources into sellable commodities. Exploiting these resources as cheaply as possible helps to boost profits but also allows bosses to grant some wage increases without hurting their profits too much. Just as some groups of workers are constantly tempted to seek common cause with their bosses rather than co-workers, pretty much all groups of workers, with the exception of those whose health is immediately endangered by ecologically destructive production methods, may be tempted to seek a raise at nature’s expense. Getting past such temptations and seek not only social equality but also ecological sustainability is an urgent task for labour and environmental activists alike. Reading volume 1 of Capital could help them to find some clues as to how to go about this.

Capital Volumes 2 and 3: Capital Against Itself

In light of the divisions between different groups of workers and between active and unemployed workers, and the temptations to destroy nature for short-term economic gain, it may seem that capital is invincible, indeed. However, Marx does more than just show how divisions among workers and ecological destruction help to create capitalist wealth. He also explains why capital is at odds with itself. The various steps it passes through during the accumulation process represent so many points of potential disruption. During the production process, capital is tied up over longer or shorter periods of time in which it doesn’t earn profits. Getting merchandise to customers comes with costs for transportation and warehousing. These latter costs explode when sales fall behind production. If, in response to sluggish sales, production is slowed down, factories sit idle without churning out profits. Workers, losing their jobs and seeing their wages cut, certainly suffer more from crises than their bosses but the latter, too, take a hit. Some go bankrupt, others have enough reserves to invest in labour-saving technology or venture into non-capitalist societies to find new customers. Yet, this dual process of innovation and expansion creates new difficulties.

If workers’ labour power is the sole source of value, and hence profit, while machines only carry over already existing value to the commodities they help to produce, automation might actually lead to lower instead of higher profits. Capitalist expansion, from colonial conquest to the commodification of private households and public sectors, breeds resistance from social groups who don’t see much advantage from their subjugation to capitalist rules. Moreover, where credit is used to open up new markets, there is also a good chance that the incomes made by those who are newly integrated into the circuits of capital are too low to pay back their credits. In the end, a little bit of market expansion comes with piles of unpaid debt.

Capitalists may be unified in their efforts to keep the prices for labour power and natural resources low and any social movements that could threaten their profits or even power in check. But apart from that, in some ways mirroring the multiple divisions among the working classes, they find themselves competing on many levels. One enterprise against another; industrialists, merchants, bankers and landowners against each other, each seeking competitive advantage at the expense of the other. These struggles within the capitalist classes represent so many weaknesses and so many starting points for a socialist movement to disrupt and further weaken capitalist power – provided activists from different backgrounds can forge such a movement. Marx’s Capital offers many clues about where to start with such efforts. If groups of activists read and discuss it together, it might also be a collective organizer. •