Toward A Red-Green Vision for Toronto

Transit is a critical issue for many people in Toronto, as in all major urban areas. More is at stake than reducing traffic congestion and gridlock. Transit and general mobility are intimately related to larger issues in capitalist society: how goods and services are produced and delivered; the location of and nature of jobs; where and how we live and travel; issues of class, inequality and oppression related to race, age, gender, and sexuality; climate justice; and the very shape and nature of our democratic institutions. 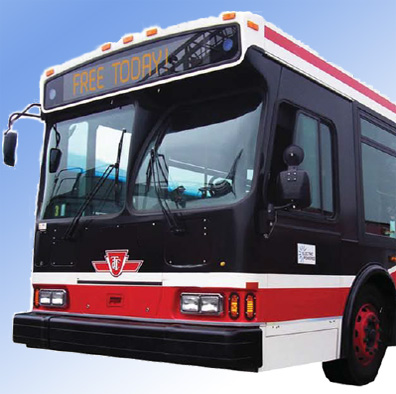 Free transit opens the door to a broader transformation of urban life and the current social system. Our ‘Red-Green’ vision is socialist, based on the working class, environmentally just, internationalist, and transformative.

Promises and Challenges of Free Transit

Our free transit model makes public transit a right of all people, which would dramatically increase its use. While serving the vast majority of Torontonians and strengthening the public sector’s role in meeting their needs, it would also address the special mobility requirements of the least mobile and most public transit-dependent: people with disabilities, people living in poverty, older and younger members of our community, and people with precarious, off-hour jobs and heavy domestic workloads, especially often women and people of colour.

Mobility in the city

Mobility is more than the ability of people to travel where they want or need to go. People who have to take transit to precarious jobs, juggle two or more jobs, and/or balance household and work tasks have different transit needs than the wealthy. For many people, a reduced need to travel could be as important as the right to move around the city.

A socially just system of mobility means planning and reordering the location of work, home, and recreation. It means changing the structure of work, including fighting against precarious work, and involves reorganizing gendered patterns of living and working. In other words, mobility systems should qualitatively improve workers’ everyday lives while reducing environmental degradation.

As neutral or positive as this seems, it has problems. Intensification in Toronto is mostly in the form of private real estate development, usually of high-rise condominiums. This leads to increasing land costs that threaten low-rent apartments, cheaper shops and industrial spaces. All these displace working-class people move to the suburbs, reinforcing sprawl. Our approach calls for compact, land-saving and energy-efficient building. This would require public land ownership and social housing that is collectively or co-operatively owned and managed.

Public Space in the City

Even publicly owned transit networks can be socially-divided and far less than really public in practice. New lines sometimes cater to privileged elites (such as the original UP Express train link from Union Station to the airport), are built and maintained via “public-private partnerships” (Toronto’s new LRT network), or bypass areas where working-class people, especially people of colour and/or on social assistance, live.

Transit must not reinforce current patterns of segregated living. It must also fully accommodate people with disabilities and special needs while allowing everyone to travel without the fear of being scrutinized by transit authorities or harassed by other transit users. In sum, free transit should provide a completely public space, where people have the right to engage with one another and feel comfortable doing so, in the spirit of the world’s most congenial public places.

The Scale of Our City

Free transit – and complementary industrial strategies – would require greater integration of neighbourhood and commuter transit, and of those with national rail networks. This would strengthen transit at all levels. Current regional commuting flows (such as GO Transit) are often out of joint with travel at smaller, neighbourhood or municipal scales; they actually encourage individual, short-term car trips and undercut necessary city densities.

We need to integrate what remains of Canada’s passenger rail grid with inter- and intra-regional and local transit networks while also co-ordinating transit with much improved cycling and walking infrastructure. Transit integration is particularly important in inner and outer suburbs with high levels of car dependency. Current forms of regional integration are business-dominated, undemocratic and underfunded. Ontario’s Metrolinx agency is particular invested in privatizing public transit in the greater Toronto area (GTA).

The RER (Regional Express Rail) network, of which GO is a component, will bring surface transit stations into the city. This is what remains of the rather short-sighted and opportunistic promises of what the then Toronto mayoralty candidate John Tory called “SmartTrack”. It will add a small number of new surface transit stops to the east and western parts of Toronto.

Addressing the Twin Crises: Environment and the Economy

Free transit would necessitate shifting away from private transport, which creates about a quarter of global carbon emissions. That shift would make a major contribution to reducing greenhouse gas pollution, which in turn would have benefits around the world. Public mass transit produces 5–10% of the greenhouse gas levels of autos and consumes much less land than cars do.

The recent economic crisis, although seen by business and governments as helpful for entrenching unpopular austerity measures, provides an opportunity for ecological and economic reconstruction. A Red-Green economic development strategy, with mass public transit as a key component, can build on workers’ and environmentalists’ fights against plant closures, such as Toronto’s Green Work Alliance in the 1990s, the Greater London (England) Council experiments in the 1980s, and new initiatives in the United States, such as the facilitation by the Amalgamated Transit Union (ATU) of transit users’ movements in cities across the country as well as Canada, the Blue-Green Campaign in Richmond, California and European movements, such as Barcelona en comu, in Spain/Catalonia.

Toronto needs to radically decrease the dependence on private vehicles that has been structured into our living and working lives since the mid-20th century. On its own, Free Transit would not end car dependence. Doing that would require not only dramatic increases in transit capacities but also measures to transform the way we use cars today.

Such changes will need to be carefully thought through. They need to recognize that many working-class people cannot easily shed their dependence on cars. They should not be penalized if switching modes of transportation is not an immediate option.

Solutions will include intensifying and expanding transit in currently transit-poor areas of the city and in newer suburbs while at the same time making residential, commercial or industrial development contingent on transit access. There should be limits on car usage and parking as priority is given to pedestrians, cyclists and transit on many routes.

Free transit can only happen if transit is fully public in both ownership and operation – it is not compatible with private-sector logic. But public-sector bureaucracies and even unionized workers may think that this demand threatens the financial viability of public transit. Achieving it will require a strong alliance among public transit workers and their unions, transit users and all supporters of robust and expanded public transit. The goal is not to make public managers more powerful, but to democratize planning and administration by empowering transit workers and users.

Free Transit is in the medium- and long-term interest of transit workers. It would end fare policing, a major source of tensions between transit workers and users; lead to increased transit employment; and raise transit workers’ importance and prestige in users’ lives.

Democratic planning should be introduced at all scales, from local neighbourhoods to higher levels of co-ordination and planning. Regional and inter-regional transit needs can also be articulated from below, by creating regional democratic planning bodies that are mandated to improve transit – not to take resources from transit-dependent but underserved areas (such as inner suburbs) or transit-dense districts (such as downtown).

Current budgetary practice makes it difficult to pay for Free Transit. In Toronto, massive public funding would be needed to replace the current 70% of operating costs paid by fares and to take on the capital costs of building new transit capacity.

The Ontario government would have to reverse its Harris-era downloading of operating support to municipalities with limited taxing ability. Both Ontario and federal governments need to provide the funding that is recognized around the world as essential for any successful transit system, free or not. Even free public transit can be cheaper than the costs of building road and other car-related infrastructure. Ending state subsidies (such as building highways at public expense) to privatized transport and land development would, of course, challenge vested interests in the construction, development, finance, media and auto-related industries.

Increasing federal and provincial funding of mass public transit with stable and generous formulas, while ending the hidden subsidies to these vested interests, would make it possible to fund free transit without increasing municipal taxes. This would not preclude a new tax structure to support the transformation of our city, such as new taxes on gas, carbon and parking, and certain kinds of tolls, congestion fees and luxury taxes. A national urban transit plan, co-ordinated across all levels of government is needed, much like the current highway system. New financing could come through restoring the 1% reduction of the HST made by Harper and higher gas taxes. A national capital levy of 2% for public transit and climate change initiatives could also be raised.

Eliminating fares would get rid of the cost of collecting them. It would eliminate Presto, and all of the other enormous apparatus used to collect and police fare collection.

As part of a progressive taxation system, we should all be prepared to be taxed for a basic public service like free transit, recognizing that this will leave us far better off than having to pay increasingly expensive transit fares or go into debt to finance car travel, which is in effect a socially regressive tax on mobility. Occasional transit users – motorists and cyclists for instance – will benefit from transit-friendly taxation in other ways, too.

A genuinely accessible and usable public transportation network is essential to creating a sustainable, breathable and livable city for us all.

How To Get There

In Toronto, the movement to defend and expand public mass transit includes the Fair Fare Coalition, Scarborough Transit Action, and TTCRiders in the city of Toronto, as well as movements in Mississauga and Hamilton and around the world. Along with the city’s working-class movement and climate justice advocates, Free Transit Toronto can create a sorely needed critical pole of reference for Toronto and Canadian politics – and achieve Free Transit. •