Solidarity with the Great Return March in Gaza

The members of the Socialist Project wish to express solidarity with the Palestinian “Great Return March” in Gaza, in addition to the ongoing non-violent movement in the West Bank against Israeli occupation and colonization. This movement, and international solidarity efforts in support of it, represents the most hopeful path to end the Israeli occupation and colonization of Palestinian land. As the occupation is carried out with the crucial support of the Canadian and U.S. governments, it is the duty of citizens in these countries to support the Palestinian struggle for human rights. 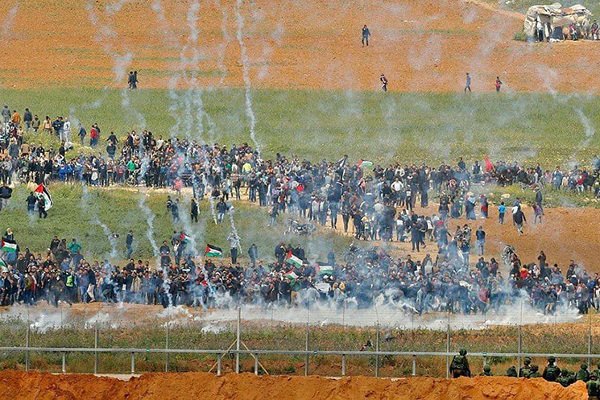 On March 30, the Israeli military perpetrated what appears to have been a deliberate massacre of non-violent demonstrators in Gaza, killing at least 17 and injuring 1,400. Almost half of these were children. While Israel routinely carries out mass killings of Palestinian civilians in the Gaza strip, the massacre nonetheless stands out as a particularly flagrant attack on non-violent demonstrators with no conceivable pretext. With this attack, the Israeli military (IDF) has followed through on threats it made to organizers and supporters of the march in the weeks leading up to the demonstrations, and has once again revealed the absurdity of its purported commitment to democracy and human rights.

Israel’s baseless claims that the protests are merely a “ploy” by Hamas to “carry out terror attacks” are intended to justify the murder of unarmed civilians demanding basic human rights. These demands are supported by international law as well as nearly every country in the world – with the marked exception of Canada, the USA, and Israel. In addition, the organizers of the march, which was supported by a wide cross-section of Palestinian political organizations, repeatedly insisted upon the non-violent nature of the march – claims supported by the observations of human rights workers (see also updated casualty numbers) as well as videos posted on social media.

It should be noted that this action is unfortunately consistent with Israel’s ongoing brutal suppression of the non-violent movement against the settlements and occupation in the West Bank, which has included the use of live ammunition against unarmed demonstrators, the imprisonment and torture of children, and other harsh methods.

The Socialist Project joins the international campaign for Boycott, Divestment, and Sanctions, as well as international civil society and human rights organizations such as Independent Jewish Voices, Jewish Voice For Peace, Amnesty International, and numerous others in condemning the massacre and demanding that violence against the demonstrators cease. We reaffirm our place among the rising chorus of voices from around the world calling for an end to the illegal occupation and colonization of Palestinian land, and the right-of-return for the thousands of Palestinian families displaced and made refugees in the Nakba of 70 years ago. •

Evoking memories of the South African apartheid regime’s massacre of peaceful protesters in Sharpeville in 1960, Israel’s military committed a new massacre against Palestinian civilians as they were peacefully commemorating Palestinian Land Day, calling for an end to Israel’s brutal blockade of Gaza and asserting the UN-stipulated right of return for Palestinian refugees.

Israel’s impunity for the murder of Palestinians, emboldened by the unprecedented level of support from the xenophobic Trump administration in the U.S. and the ongoing complicity of the European Union, must come to an end.

Supporting calls for an independent, international investigation, the Palestinian BDS National Committee (BNC), the largest coalition in Palestinian society and the leadership of the global Boycott, Divestment and Sanctions (BDS) for Palestinian rights, calls for effective accountability measures against Israel, particularly a two-way military embargo, as was imposed against apartheid South Africa. 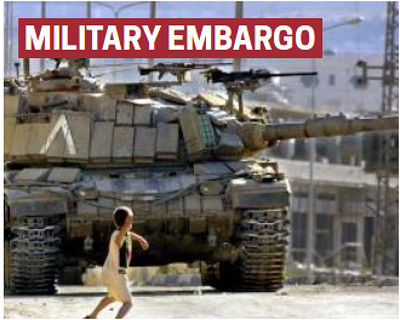 As tens of thousands of Palestinians peacefully marked Land Day on March 30th in the occupied and besieged Gaza Strip, Israeli military forces, or what Israeli journalist Gideon Levy calls, “the Israel massacre forces,” opened fire with live ammunition, rubber-coated bullets and tear gas, following deliberate plans to use “a lot of force.” As a result, at least 17 civilians were murdered and more than 1,400 injured, mostly from live ammunition. Almost half of the injured are youth.

Land Day has been commemorated by Palestinians every year since 30 March 1976, when Israeli military forces killed six Palestinian youth in mass peaceful protests in the Galilee against Israel’s large scale policy of confiscating their ancestral land to create exclusionary Jewish-only colonial settlements.

The murder and mass injury of Palestinian civilians inside the occupied Gaza Strip, in an area which Israel arbitrarily defines as its “buffer zone,” was premeditated. Israel had announced the deployment of 100 snipers to target the nonviolent protesters, ignoring warnings by Amnesty International. An Israeli military spokesperson has accidentally provided evidence that the massacre was premeditated by proudly stating that “nothing was carried out uncontrolled; everything was accurate and measured. We know where every bullet landed.”

The peaceful protests on Land Day marked the beginning of six weeks of popular mobilization, which will culminate on 15 May, Nakba Day, the 70th anniversary of Israel’s systematic ethnic cleansing of the majority of the indigenous people of Palestine. Protests and marches are being held by Palestinians in the occupied Gaza Strip and West Bank, as well as Palestinian citizens of Israel and Palestinian refugee communities around the world, all upholding the fundamental right of Palestinian refugees to return to their homes and land, and for an end to Israel’s policy of ethnic cleansing.

Palestinian popular protests are not just against Israel’s decades old policies of ethnic cleansing, siege and denial of human rights. They also target the U.S. administration, which is set to move the U.S. embassy to Jerusalem, defying the international consensus that rejects Israel’s sovereignty on any part of the city and considers its eastern part illegally occupied and annexed.

Last Friday, Israel yet again used Palestinian civilians as guinea pigs in its weapons laboratory, testing its new teargas-firing drones against civilians in Gaza. The export of Israeli military technology, “field-tested” on Palestinians, contributes substantially to financing Israel’s oppression of Palestinians and military aggression against other nations.

The BDS National Committee welcomes the recent resolution of the UN Human Rights Council calling on states to ensure respect of international law, among others by preventing arms trade with Israel.

We reiterate our call on people of conscience across the world to: