New Era in War on Workers: The Ramaphosa Presidency in South Africa

The National Union of Metalworkers of South Africa (NUMSA) views the appointment of Cyril Ramaphosa to the position of President of the Republic of South Africa, as a new era in the war against workers and the working class majority in the country. 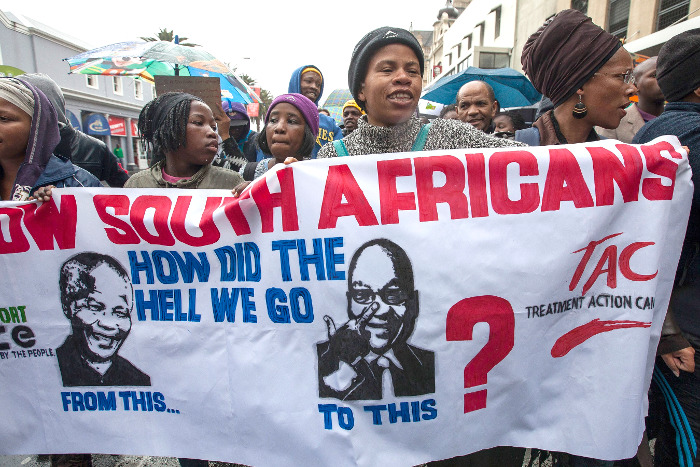 It is also important for us to state that we welcome former president Jacob Zuma’s well deserved and humiliating removal from the highest office in the land. Zuma’s inglorious exit from power is fitting punishment for his treacherous betrayal of the African working class. As an affiliate of the Congress of South African Trade Unions (COSATU), which is still a member of the ANC led alliance, NUMSA was a part of the ANC led alliance. Together with the South African Communist Party (SACP) and the through the African National Congress Youth League (ANCYL) we played a significant role in the rise to power of Jacob Zuma and his eventual ascendance to the office of President of South Africa.

Brief Background on Zuma and the Alliance

Zuma skillfully and opportunistically rode the wave of anger of the working class and the disgruntled aspiring African capitalists to ascend to power. We were not blind to the personal weaknesses of Jacob Zuma. Within the context of alliance politics, we were reasonably confident that the alliance of communists, working class youth and the working class could secure some limited leftward shift in the ANC led alliance and possibly also some significant economic and social gains through a left shift in ANC government policies. Indeed the 2007 ANC Conference did mirror some of our hopes.

Zuma was barely in office when, in 2012, it became very clear to us that neither the neoliberal policies nor corruption and all the rot which combined these two capitalist evils can unleash on any country, were abating under Zuma. Rather, we noted a steep rise in both evils.

NUMSA then did what any genuine revolutionary working class formation does under such conditions: we called for Zuma’s immediate resignation and separated from the ANC led alliance. We did this in our historic 2013 Special National Congress. By then, it was very clear to many of our members that the ANC had run its course and could no longer be relied upon to advance the demands of the Freedom Charter, and that it did not have solutions for the crisis facing the working class majority. The rest as they say is history. We were hounded out of COSATU. A fake union was quickly assembled to facilitate divisions and the destruction of NUMSA. Our leadership became targets of all sorts of attacks and was accused of plotting an illegal regime change. Government departments began making life difficult for the union, in many ways.

Meanwhile, Zuma and his friends (sometimes significantly supported by an unconscious SACP) systematically went ahead to dismantle the coalition of left forces that had facilitated his rise to power, and ensconced himself with the now extremely infamous Gupta gang. Hounding NUMSA out of the federation fatally wounded and weakened trade union federation COSATU, the SACP and the ANC, as subsequent elections results so glaringly revealed. The ANC led alliance was then exposed for what it had finally become: a vehicle for looting the state.

Before NUMSA resolved to abandon the ANC led alliance we had the decency to warn Jacob Zuma personally about his possible end: we informed him that stripped of the revolutionary forces he had used to rise to power, the racist liberals would see to it that he inevitably tasted jail. In his characteristic fashion he laughed at us and said he was happy with the arrangements he had in office. We are pleased to say that our Marxist-Leninist analysis was correct. He is alone and isolated has been relegated to the dustbin of history, where he belongs.

The Ramaphosa Presidency Spells Doom for the Working Class

However, the working class must remain vigilant. Ramaphosa as president is not a victory for workers. We must expect a more diligent, effective and ruthless pursuit of neoliberal capitalist policies by the ANC government. Of course the neoliberal materialist culture of grotesque inequalities, conspicuous consumption and corruption will continue; only this time the disguises will be much more effective!

That is why we have absolutely no illusions about what a Ramaphosa presidency means for the working class: the ANC government now has a man most favorable to South African old money – White Monopoly Capital and imperialism, as president of the ANC and the country. Furthermore, Ramaphosa is personally responsible for the mass murder of 34 striking miners in Marikana in the North West in 2012. With a simple email he used his influence to sentence the workers at Lonmin mines to death for daring to protest against inhuman living and working conditions. He was a senior executive at Lonmin and one of those who founded the National Union of Mineworkers. He could have used his negotiating skills to de-escalate the tensions at the mine between workers and mine management, but he chose instead to defend Capital at the expense of workers. Make no mistake, he is ruthless.

Ramaphosa may manage to create a semblance of unity between the black capitalists who are created and survive by stealing from the government through tenders, those who are beneficiaries of ‘shares’ from imperialism and White Monopoly Capital like himself and White Monopoly Capital itself. The trouble, however, is that poverty, unemployment and inequalities suffered by the majority black and African working class will deepen.

How will this alliance of capitalists police black and African working class poverty in order for them to ‘stabilize’ and sustain neoliberal capitalist South Africa for their accumulation? Three immediate methods are already unfolding:

A clever and evil combination of all three by Ramaphosa will see the country easily sliding into some kind of fascist state in which brute force will be key to sustaining the capitalist class. There is one consoling factor emerging out of this transition from Zuma to Ramaphosa and what this means in class terms: the working class majority will taste what it is like to be ruled more openly and directly by the raw power of White Monopoly Capital, in post 1994.

What Is To Be Done?

The working class must mobilize themselves as a class for themselves this time around, if they are to win the war against their oppression and exploitation from South African capitalists of all colors in alliance with imperialism. NUMSA will intensify its contribution to this struggle. Already chronic mass unemployment of working class youth has engineered violent crime in all our working class communities and reduced our lives into a state of undeclared civil war. We suffer from inferior education, substandard housing and the majority continue to be denied basic social amenities. We die from the most easily curable diseases and we suffer starvation and hunger. These conditions will worsen, from now on.

Ramaphosa will achieve some degree of unity in the ANC, and consolidate the power of White Monopoly Capital and imperialism, in South Africa. He is the president of austerity measures and has been driving a neo-colonial agenda. He is indeed a Trump of our time. He will personally drive privatization. The structure of the South African economy will remain exactly as it has for over two decades, in order to guarantee that the elite minority continue to benefit as they have done, even under Apartheid. Radical Economic Transformation will continue to be a myth, despite the desperate need to transform the economy to benefit the working class majority. Instead Ramaphosa and the ANC will continue to endorse macro-economic policies which will concentrate and centralize wealth in a way which will reflect our racist past. This is why Ramaphosa is the ‘Darling’ of the business world. He negotiated the original CODESA deal which sealed our fate as the working class through a bourgeoisie constitution.

To counter this, and the possible violent explosive end to the Ramaphosa presidency, the working class of all races in South Africa must unite and organize themselves into a Socialist conquering force, a revolutionary socialist workers party, to uproot South African capitalism from our soil. If we fail to do this, poverty, unemployment, everyday violent protests in our working class communities and civil war will continue.

The battle to ensure that all working class families live a dignified life of equality and freedom continues. It is time to educate ourselves, mobilize and organize for a truly free Socialist society. For the working class, there will be no lunch at all, from Cyril Ramaphosa!

Irvin Jim is General Secretary of the National Union of Metalworkers of South Africa (Numsa).