Take Back the Unions for Their Members

What we are witnessing in the labour movement today is quite simply a tragedy. At a time when the working class is suffering as never before, leaders of South African Federation of Trade Unions (Saftu) are tearing the young federation to pieces.

The working class needs this federation to strengthen and grow. It is the only potentially militant, independent grouping of trade unions in South Africa. And it is not just a question of the labour movement needing such a leading force. It is the working class movement as a whole.

Community organisations are weakened if they are unable to get the active support of organised workers. Abahlali baseMjondolo (the people of the shacks) needs the active support and resources of organised workers. The Xolobeni struggle for the “Right to say No” is strengthened by the support of a federation of workers. The loss and the setback to the working class movement will be huge. 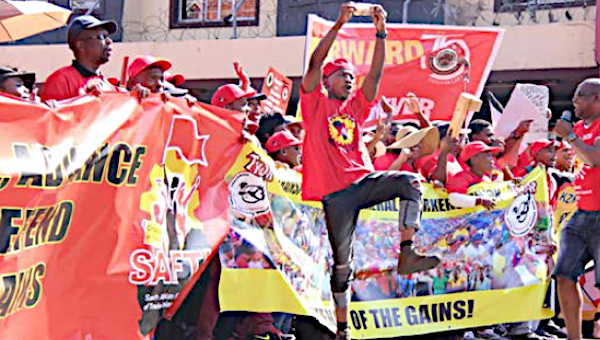 What Lies Behind the Dispute

The heart of the dispute inside Saftu comes down to a strategic difference over how to build the working class movement politically. National Union of Metalworkers of South Africa (Numsa) argues that the correct way is to build what it calls a Marxist-Leninist Vanguard Mass Party. The Saftu General Secretary and a number of affiliates favour the building of a mass working class party or Movement for Socialism. Numsa established its “vanguard party,” the Socialist Revolutionary Workers Party (SRWP). It now wants Saftu to throw its weight behind the SRWP. It views as a class enemy anyone who stands in the way of that project.

Defence of the Party becomes synonymous with defence of the working class. Perhaps it was more understandable at a time when the Bolshevik Party had just successfully played a leading role in a revolution. It is rather less understandable when the party we are talking about is a largely dysfunctional, factionalised, small grouping of mainly Numsa worker leaders and staff. It is an organisation that was able to secure only 24,439 votes nationally in the last election. It is support for this organisation that Numsa appears to be willing to shatter Saftu, a federation of 600,000 members.

What an irony. The famous Numsa Special Congress in 2013 led to Numsa’s expulsion from Cosatu because the affiliates of Cosatu required allegiance to the ANC. Numsa is now ready to break Saftu apart because it requires allegiance to SRWP. Is there no learning from history?

Factional politics are narrow politics. Politics which fetishises a tactic or strategy at the expense of having a perspective of the interests of the working class and the poor as a whole. Numsa fetishists a particular form of political party. Only a Marxist-Leninist Vanguard party will retain a revolutionary perspective. Only a Marxist-Leninist Vanguard party can be relied on to not sell out. Look at Syriza; Podemos: living proof.

And then there is the other aspect of this tragedy – the sell-out to a lifestyle for union leaders funded by a union investment company. In Numsa’s case it has been a particularly insidious process because of the business that the investment company engages in. The main customers of the Numsa Investment Company (NIC) are the union’s members. This has become clear as the sordid story of 3Sixty Life (the main subsidiary of NIC) has unravelled through amaBhungane and GroundUp.

3Sixty makes its money by selling insurance policies to workers. Numsa organises 350,000 workers. A perfect synergy you might think. The benign view of this model is that Numsa’s company makes money by selling policies to members and then ploughs that money back into the union for the members’ benefit. It must have looked like a pretty model on someone’s computer 15 years ago.

It might look like a clever financial model. But when looked at politically and organisationally it is a nightmare. So the less kind view of the model sees a membership delivered as customers to an industry that has always been known as exploitative. It wants to sell policies. Selling of policies works on commission. The more you sell the better everybody does. So workers are persuaded one way or another to spend some of the little they earn on policies, often with no clear idea of their real value. And Numsa opens its doors to this industry. Numsa becomes part of this industry. And the membership becomes its prey.

And the problems grow. Once the investment company is so deeply entangled with the union, it starts to have an interest in how that union is run and by whom it is run. The doors to its customers must remain open. The tail starts to wag the dog as the interests of the company become more important than the interests of the union’s members. The results are plain to see in Numsa now. Bitter struggles for leadership positions have ended up in court cases around elections. Stories about money flowing in the election process abound. Compared to ordinary workers, the investment company has plenty of money. It has the means to buy people.

And if you think we exaggerate, listen to Khandani Msibi, the CEO of the investment company, himself. In recent court proceedings he was challenged – why did he spend money on the birthday party of the Numsa General Secretary? Why did he buy his daughter a laptop? What was the value for the company in these expenditures? They could not be valid expenditures if there was no benefit to the company. And what was his answer? It came straight out of the Bosasa playbook – these expenditures were “marketing initiatives”; they “allowed 3Sixty Life access to Numsa events where it could further its brand and strengthen relationships. When he said this, he jumped right out of a frying pan and straight into the fire. He was proudly proclaiming to the world that by sweetening the Numsa GS, he gained access to the union. What’s the difference between that and Gwede Mantashe’s security system? Or Malusi Gigaba’s bags full of cash? All of it is about access – access to the state as a market. Access to Numsa as a market. Looks very much the same.

So where does the trade union movement go from here? It seems clear that we have now reached a point where the interests of the leadership have become separated from those of the membership of many unions. A leadership layer enjoys a lifestyle very far from that of the members. They develop an interest in making sure they remain the leadership. This happens at all levels. Which full-time shop steward, after four years working in an office, with access to a computer and a car, wants to go back to being a worker on the production line? Which General Secretary, who lives in a modern, middle-class housing estate and drives a Mercedes Benz or a BMW to work, with a bodyguard to boot, wants to go back to the ranks of the union again?

A new vision and practice for the labour movement is needed. The only direction when dealing with such a bureaucratised leadership is to organise workers again from the ground up. To build the capacity of members to challenge the vested interests of the leadership. To take back the union for its members.

Such organising is often called a rank-and-file approach. It’s a foot soldiers approach. In fact, of course, it’s where unions started in the 1970s and 80s in this country. There is a task to rebuild our trade union movement where the interests of members prevail and where to lead is to serve. We have to break the pattern where union leadership is about escaping your class position and status. In fact, we have an article in this issue (No. 81) about one such successful rank-and-file struggle in the United States.

It is time to begin the arduous task of building democratic organisation again from the grassroots. To struggle to wrest control of unions from those who currently mislead them. It won’t be a rapid process. There may be victories but there will certainly also be defeats along the way. But on this, there really is no alternative. •

This article first published as an editorial in Amandla No. 81, and reposted on AIDC website.

Amandla is a left wing media project built around a magazine that publishes six editions per year. It was initiated in 2006/7 by activists coming from different political traditions on the left.