On the Rails: A Case for Renewed Leftist Infatuation with Transport

A few weeks ago, at 3:30 in the morning, the Manitoba government froze public transit funding to Winnipeg, equivalent to a $10-million cut. It was a quiet affair. The bill that it was contained in wasn’t ever brought to committee, meaning the public weren’t able to formally comment on it. But we’ve already started to see the brutal consequences: soon after, Winnipeg Mayor Brian Bowman announced that the city will have to cut 59 routes, fire 120 bus drivers and increase fares by a considerable 25 cents. 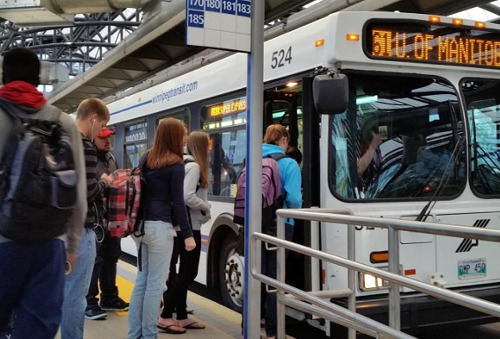 Let’s be perfectly clear. This is class warfare.

The basic ability for people to get from one place to another – whether for work, family or leisure – has been totally gutted in recent decades. We’re now almost entirely reliant on the neoliberalized ‘solutions’ of privatized cars and airplanes, marked by rabid union-busting in the workplaces, the emitting of massive amounts of greenhouse gases and considerable financial costs to people who have no other reasonable option available to get around.

And it’s a vicious reminder of why the Left must focus on transportation as a key part in its struggle against rising austerity, inequality and climate change.

Social Inequalities and the Neglect of Public Transit

Car culture tends to be understood as a manifestation of desires for freedom and control. What’s often left out of such readings is who car culture denies freedom and control to. Here’s a quick and incomplete list: people with disabilities or other mobility issues, family and friends of incarcerated people in institutions outside city limits, elderly folks who rely on wheelchairs or walkers, or poor people without the means to afford car costs.

In turn, that disproportionately impacts Black, Indigenous and people of colour as well as trans, two spirit and non-binary people – who all far disproportionately experience poverty and other forms of oppression that make expensive transportation options considerably less accessible.

That actively denies people access to safe, affordable and efficient movement, itself undermining opportunities for jobs, relationships and leisure.

Even those who have access to such modes have to deal with the serious downsides: the psychological strain of rush hour and road rage, the financial costs of gasoline, maintenance, user fees and insurance, the risk of injury, air pollution and death due to collisions.

Associated with the issue is that many high-level solutions to climate change often prioritize growing technologies like electric vehicles, biofuel-powered airplanes and driverless trucks. Elon Musk is especially venerated as a saviour on this front – despite horrific labour practices, allegations of racism and underwhelming production numbers orbiting companies like Tesla.

Greenhouse gas emissions from the transportation sector will certainly reduce in coming years due to such technologies. But such a transition won’t do anything to increase access for aforementioned people, and will actually financially punish them as carbon pricing will reward those rich enough to afford new electric cars (leaving old gasoline-intensive cars for poorer folks to purchase due to lack of transit access and pay more at the pumps). Nor would it challenge the rampant profiteering by the likes of Musk, who seek to capitalize on markets and maintain inequality.

That is, unless the Left starts mobilizing around transportation as an incontestable public good that requires massive funding.

Massive Opportunity for Investments in Rail and Transit Infrastructure

It’s really not that hard of a sell to make. The language of “individual rights” is frequently exploited to defend right-wing ideals of property, wealth and colonialism. So let’s sensibly leave that aside. Instead, it may be helpful to approach the crisis from the position of creating a low-carbon, technologically advanced and economically just society, rooted by extensive transportation networks that prioritize accessibility and affordability for all.

Unions, co-ops, electoral parties and other leftist organizations can agitate for many things on this front.

On the sheer infrastructure side of things, that could include dedicated tracks for VIA Rail, allowing for electrified passenger rail to become an actual option for regular people as opposed to a tourist-oriented service that has to bow to the whims of freight rail companies like CP and CN. Or, build the long awaited Calgary-Edmonton and Windsor-Quebec City high-speed rail lines, setting the example for what’s possible across the country with greater investments.

Zooming in to the city or regional level, we could be talking about a coordinated combo of subways, light-rail transit, streetcars and dedicated bus lanes. These are not far-out ideas, but regular practice in places like China, Japan and much of Europe. Every layer of transportation adds flexibility and accessibility to the network.

Such systems would greatly undermine the need for commercial airplane: terrific news for climate change given the fierce resistance by airlines to carbon pricing and inevitable inability for fuel switching (unless you’re a true techno-utopian).

Infrastructure Investments Must Also Be Accompanied With Service Access

But it’s not enough just to build public transit infrastructure. In fact, politicians are very good at announcing considerable investments in transport infrastructure ahead of electoral season due to the sheer visibility of such spending.

Transit services actually have to be made accessible for the most oppressed peoples. At root, that means free or heavily discounted fares. There’s no way around it.
Surprisingly, Calgary just set an example of what this can look like, offering a monthly transit pass for $5.05 to people making $12,500 or under. But that should be the baseline. As leftists, we must aim higher. In the era of catastrophic climate change, every municipality should be urgently transitioning residents to transit-oriented living.

As well, most assaults on transit drivers are due to fare disputes. Transit unions can and should be all over this.

Hugely increased ridership due to lowered fares would likely result in a considerable uptick in demand for more service, greatly boosting the case for a much larger and unionized staff of drivers, maintenance workers, cleaners and administrators. It’ll also surely result in a push for new transit lines, perhaps even helping to boost the profile of politicians.

A massive cultural shift would obviously have to take place. But most people are literally living paycheque-to-paycheque. Make a radical enough shift in costs and a critical mass will form.

The obvious question is how it will be funded. It’s a depressingly predictable question from self-described leftists. In recent years, we’ve seen many progressives, especially the federal and provincial NDP, succumb to deficit and pocketbook politics, appealing to right-wing economic arguments to boost their supposed political viability. Leftists shouldn’t oppose projects because of costs, but because they’re unjust.

As recent revelations about the Paradise Papers have reminded us, there’s a simply enormous amount of wealth being hidden by extremely rich individuals and corporations in offshore tax havens.

Income tax rates are already stunningly low for the rich – to say nothing of deductions and subsidies like the capital gains tax rate – and recovering the estimated $10-billion to $15-billion in tax havens seems like a no-brainer item for leftists to push for. There’s also incredible money being invested in military, policing and incarceration that should immediately be diverted for other purposes.

Then there’s the actual savings from transitioning to a public system.

Each Canadian currently pays, on average, $437/month on car costs. Even with a very conservative estimation, that calculates to around $100-billion in additional funding for transit every single year. That’s to say nothing of enormous investments in roads and healthcare associated with injuries and pollution.

All of this could be diverted into public transportation, as well as other critical areas like housing, food and electricity generation. That pressure must come from the left, and result in truly public and participatory processes.

Otherwise, the likes of Elon Musk will rule the remainder of humanity’s short tenure on Earth. And that will be anything but just, sustainable or democratic. •