Parallels Between Catalonia and Quebec

A major item on the agenda of the upcoming convention of Québec solidaire (QS), to be held in the Montréal suburb of Longueuil December 1-3, will be a proposal for fusion with another pro-independence party, Option nationale (ON). This will entail revisiting the relationship between the parties’ support for Quebec independence (basically the entire program of ON) and Québec solidaire’s attempt to link the national question with its social justice program.

The current struggle for national self-determination in Catalonia quite naturally suggests parallels with the issues posed in the Quebec pro-sovereignty movement. In recent weeks, two leaders of Québec solidaire – Manon Massé, a party spokesperson and member of Quebec’s National Assembly, and André Frappier, a member of the QS National Coordinating Committee – have visited Catalonia as invited guests of the Popular Unity Candidacy (CUP), a left pro-independence party that is now contesting the December 21 Catalan election.

In the following article, which I have translated from Presse-toi à gauche, André returns to a topic he has frequently addressed in recent months as a coordinator of a pan-Canadian network of left social movement activists that is now beginning to develop. An earlier article by him was published here on October 5.

André’s article is followed by a statement of the newly-formed Quebec coalition of solidarity with Catalonia, which includes major nationalist organizations, trade unions and political parties. Its first public meeting will be held on November 18, in Montréal. See its web site for particulars, at www.solidarite.cat.

The political situation in Quebec and internationally, with the escalation of the Catalan national struggle, impels us to deepen our thinking on these issues. What role can Quebec’s national liberation struggle play in class terms, in the context of the fight for emancipation of the peoples in the Canadian state? The following is an attempt to address these questions. 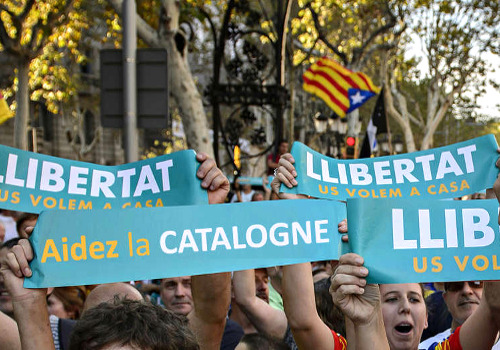 For more than forty years the national question in Quebec has been dominated by the Parti québécois (PQ). But it was not the PQ that invented nationalism, that was the product of the domination that has existed since the British Conquest and which was structurally integrated at the time of the Canadian confederation.

Nationalism is not, by definition, necessarily progressive. That depends on the political situation and the role nationalism is summoned to play as a vehicle for transformation toward an egalitarian society. Historically, in Quebec, national oppression has always been a source of social mobilization against capitalist domination, which appears beneath the face of a foreign domination.

This domination has been introduced in various ways – in the cultural, media, educational systems as well as at the economic and social levels. For many years now, American and Canadian culture have inundated our television screens. Quite recently, the CBC produced a purportedly historical narrative of Canada’s history that in no way reflected the historical roots of Quebec or of the indigenous nations. And for many years, as Yvon Deschamps used to say, you worked in English or were unemployed in French – which is still the situation in many areas of activity today.

Rise and Fall of PQ

It was this feeling of excess that the PQ built on in its origins. The nationalization of electricity resources previously controlled by various private interests, initiated by René Lévesque under Jean Lesage’s Liberal government, showed the way and prompted a major economic take-off, boosting national pride.

This “Quiet Revolution” completed by René Lévesque’s PQ soon came up against some antisocial economic choices with the rise of the recessionary period at the turn of the 1980s. The national liberation struggle was never able to develop its full potential, therefore. In the years that followed, the PQ built itself as a party of neoliberal state administration with the consequences that entailed in terms of disillusionment and the stifling of mobilizations if not direct confrontation as in 1983 during the public sector negotiations.

The sovereigntist perspective was dimmed both by the neoliberal policies implemented by the PQ when it was in office and by the identitarian nationalism that has come to replace the strategic impasse which the party had reached and which ultimately became the gravedigger of what it had once been. Herein lies the necessary distinction between the deviation of the PQ’s nationalism and the scope of the struggle for sovereignty in terms of social change, not only in Quebec but in the Canadian state.

In Catalonia, where the political struggle is now much more intense than it is in Quebec, the fight for a popular reappropriation of society is crucial. The issue of fiscal independence emphasized by the middle classes arouses no sympathy among the popular classes in the rest of the Spanish state or in a significant part of Catalonia as well, in particular the popular sectors in the working-class neighborhoods of Barcelona.

The Catalan independentist movement, and more precisely the left, will have to take this into account, especially because Rajoy accuses Catalonia of benefiting from economic resources more ample than the Spanish average and claims that the Catalan population wants to keep its wealth for itself, depriving the rest of Spain. The Spanish working class is in this way pressed to support those who are applying the rules of austerity against it and to fight against its objective ally in Catalonia.

The struggle of the Catalan people must therefore find a way to link their fight for national liberation to a perspective of struggle against the austerity imposed on the entire Spanish state by the government in Madrid, as the movement of the indignados did a few years ago.

The dynamic of struggles is not linear. The fight for social change and the overthrow of the old state does not begin everywhere at the same time, and develops more intensely within nations oppressed by the central state. It is essential that the Spanish working class likewise find the way to supporting the struggle of the Catalan people against the oppressor state headed by Mariano Rajoy. This is in its own interests. A defeat of the Catalan struggle would be a major victory not only for the right-wing government in Madrid; it would also ensure some stability to the European Union in its domination of the working class throughout Europe, which could continue to enrich itself through increasingly drastic austerity measures as it did with the Greek population two years ago.

So also in Quebec. The fight for control of our national fate, our resources, our environment and our industry cannot be successful without challenging the control by the ruling classes. That inevitably means looking beyond Quebec’s borders and calling on the working people in the rest of Canada to support our fight for social justice against the equally inevitable intervention of the Canadian state and its financial institutions, which will apply the same medicine as the World Bank did to Greece or Madrid and the European Union is doing to Catalonia. Didn’t Trudeau say that there was only one united Spain? •

In the wake of events in Catalonia, especially since the Declaration of Independence of the region by the Catalan Parliament, several major organizations of civil society and four political parties in Quebec have agreed to come together to form a broad coalition of citizen solidarity and cross-partisan support for Catalonia.

The Coalition supports the Catalan population and the Carles Puigdemont government, which was democratically elected in 2015. It calls on Spain to respect democracy and condemns the continuing wrongful proceedings against the Catalan leaders, as well as any recourse to violence. In addition, the Coalition intends to support the efforts of the Catalan government to have the new Catalan Republic recognized.

International Solidarity
When we see the inertia of the international community, the intransigence, use of force and violation of the civil and political rights practiced by the Spanish government with regard to Catalonia, it is imperative that Québécois who support the principle of democracy speak out in solidarity with the Catalan people and government who have fought peacefully and democratically for their right to self-determination.

The objective of the Coalition established today is to ensure that these rights are respected by the Spanish State and also recognized by the international community, starting with the governments of Quebec and Canada.

Broad public meeting on November 18th
As a first activity, the partners in the Coalition have agreed to organize a big public meeting on Saturday, November 18 to take stock of the situation in Catalonia, and to show Quebec’s support to the Catalan people. It is intended that a Declaration of Quebec Solidarity with Catalonia be announced, along with with artistic performances and an open discussion period. The details of this gathering will be announced soon.

Call for broadening of the Coalition
In order to broaden the reach of the message and make the action of the Coalition even more powerful and effective, an appeal is made to all groups, civil society organizations and political parties that respect the right of the Catalan people to choose their future to express their interest by email via the address coalition@solidarite.cat.

Full details of the activities and actions undertaken by the Coalition will be available on the website www.solidarite.cat.

The following organizations have, to date, agreed to join the Coalition (in alphabetical order):

André Frappier is a former president of the Montréal postal workers and now a leader of Québec solidaire.