We the undersigned civil society organizations guided by the Constitution express our concern over the political developments in Zimbabwe, today Wednesday 15 November 2017. We call for the peaceful and constitutional resolution of the situation and the immediate return of Constitutional order and democracy in Zimbabwe. As civil society we reiterate our position that the political transition in Zimbabwe must be guided by the Constitution and should adhere to all full tenets of democracy enshrined in it that include a multi-party democratic political system. We condemn any actions, attempts and interests to attain state power outside constitutional provisions. We believe that the solution to Zimbabwe’s socio economic and political problems should be a product of an inclusive all stakeholder process. 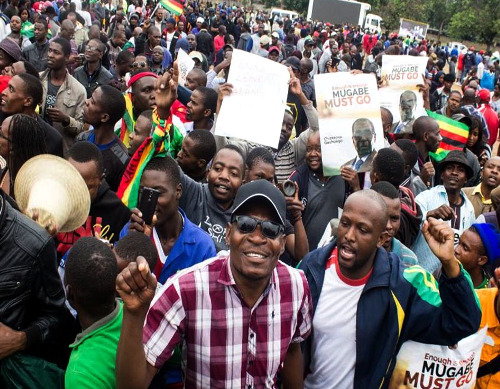 We reiterate our position that events in Zimbabwe pose serious security challenges for ordinary citizens and the global democratic order and restate our commitment to defend the Constitution of Zimbabwe. Zimbabwe’s political transition must be guided by the Constitution and a firm commitment made to uphold the Rule of Law. •

Zimbabwe Military Must Step Aside for National Reconciliation

The International Trade Union Confederation (ITUC) has called for the Zimbabwean military to step aside immediately to allow civilian control of the government and the establishment of a process of national reconciliation. Having seized power, the military is now holding the country’s president, Robert Mugabe, under house arrest.

Sharan Burrow, ITUC General Secretary, said, “This is an unconstitutional move from the military to remove a president who has himself repeatedly violated the Constitution and fundamental civil rights. Mugabe has plundered the Zimbabwean economy and driven the vast majority of the population into severe poverty, but that cannot excuse the actions of the military, which have no place in a democracy even where the government is in such disarray as in Zimbabwe today. The rule of law must be paramount, and the people of the country must be allowed to chart a new course for Zimbabwe through a civilian-led process of national reconciliation based on respect for democracy and human rights.”

The military move follows turmoil within the ruling ZANU-PF party, focused largely on Mugabe’s efforts to handover power to his wife, Grace Mugabe. Following charges of assault on a woman in South Africa in August, Grace Mugabe was given diplomatic immunity by her husband’s government, and she is currently in dispute with a diamond merchant over a ring worth $1.35-million (U.S.). She is demanding repayment of the cost of the ring to a Dubai bank account which she controls.

“Zimbabweans, and the international community, will not lament the likely end of the Mugabe era with the ruling clique notorious for its lack of regard for ordinary people while amassing vast wealth for itself. Nevertheless, military rule is never acceptable, and Zimbabwe’s army chiefs must step aside immediately, freedom of the press must be restored, and other fundamental rights including freedom of association and assembly must be fully respected.

“The international trade union movement stands in solidarity with the people of Zimbabwe, and will closely monitor developments to ensure their democratic rights,” Burrow added. •