The Tory Caucus Fraud Scandal of the 1990s

Queen’s Bench Justice Ross Wimmer upon sentencing
Michael Hopfner, former Tory MLA and Caucus Whip,
for fraud to 18 months in jail and a restitution order of $56,000.

You may have noticed that former Tory premier Grant Devine has returned to public life in Canada. Brad Wall, the current premier of Saskatchewan, has appointed Devine, his old mentor, to the Board of Governors of the University of Saskatchewan. This marks Devine’s second attempt at a return to public service. Back in 2004 he declared his candidacy for the federal Tory nomination in the district of Souris-Moose Mountain. Though Devine had strong local support, the party’s interim national council nixed his candidacy and leader Stephen Harper made it clear he would not sign his nomination papers. Devine was on track to win the nomination and inevitably the seat – the Tories could run a dead dog in Souris-Moose Mountain and win handsomely. But Devine had too much negative political baggage and the prospect of his joining the federal Tory caucus was just not acceptable to the party, despite his cringing whine, “People in government do make mistakes… They happen.”

Wall obviously has more political courage than Harper. On the other hand, he probably knew he was about to resign as premier when made the gesture honouring his mentor when Wall was a lowly ministerial assistant. Wall won’t have to live with the political fallout that may come.

Given the present financial mess of the University of Saskatchewan, one must question the wisdom of appointing a former premier who left the province an economic basket case upon his defeat in 1991. One should also worry about Devine’s management skills. After all, many of his selections for cabinet and senior caucus positions ended up convicted of fraud and/or breach of trust – 14 pleaded guilty or were convicted at trial, five of whom received jail time. Operation Fiddle, as the RCMP dubbed their investigation into the elaborate fraud scheme hatched by those in charge of the Tory caucus office, was very, very serious business. 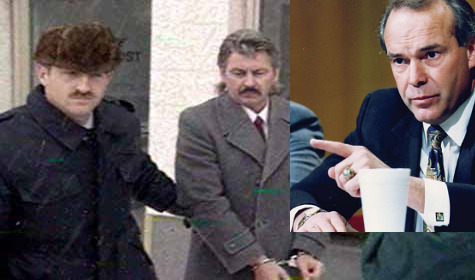 According to the ‘alternative truth’ of Grant Devine, that is just not the case since “a whole bunch of it was nonsense,” as he assured us in a recent interview in the Regina Leader-Post.

We will never know exactly how much money was misappropriated by the fraud scheme. Investigators and prosecutors estimated it was between 1 and 2 million dollars. But the investigation was hampered: the four numbered companies incorporated to issue false invoices to the government for services never rendered were dissolved after the 1991 Tory defeat and their records destroyed. Similarly all Tory caucus office records were destroyed. The funds were largely distributed as cash for expenses and bonuses delivered in envelops. $240,000 in thousand dollar bills was recovered from two safety deposit boxes under the name of Fred Peters, an alias used by John Scraba, the caucus communications director. $455,000 appeared in the individual bank account of a Tory MLA and all but $69,000 was never recovered. Given the destruction of the records of the numbered companies and the Tory caucus office, the investigation was limited to following the paper trail left by payments by the government finance office to individuals and the numbered companies. Some of those charged also became witnesses for the prosecution. At the end of the day it looks like the fraud scheme involved rather large sums of money. The total remains a mystery.

Not so, according to Grant Devine. “It was a couple of hundred thousand dollars, so it wasn’t a lot of money.” The RCMP, the army of prosecutors, the juries, and the presiding judges at the trials apparently got it all wrong.

Devine makes no mention of numbered companies and safety deposit boxes rented under a false name. It was really not that elaborate. “We pooled the money so that they can [buy] advertising. And if you weren’t careful about which account [you used] you took from the wrong pool. Well, a whole bunch of it was nonsense.” We finally have the real alternative truth of the so-called fraud scheme – it was just a matter of a few accounting errors. “They were charged and then they were found guilty of taking it out of the wrong funds.”

What a relief. Finally, the truth is out. The victims of all this? Certainly not the public whose funds held in trust by the government for running the province were stolen. According to Devine the real victims were those charged and convicted. “It caused heartbreak. It caused a lot, a lot of pain for people who didn’t deserve to be treated like that.”

In the era of Donald Trump the ‘alternative truth’ about Operation Fiddle has finally been revealed.

For those seeking an alternative to Devine’s ‘alternative truth’, the following are recommended: Gerry Jones, SaskScandal: The Death of Political Idealism in Saskatchewan (Saskatoon: Fifth House, 2000) and J. F. Conway, “The Devine Regime in Saskatchewan, 1982-1991: The Tory Caucus Fraud Scandal and Other Abuses of Power,” in Susan C. Boyd et. al., (editors), [Ab]Using Power: The Canadian Experience (Halifax: Fernwood, 2001, pp. 95-109). The quote of Justice Wimmer is from Jones’ book, p. 184. •