Populism in the 21st Century

Populism: “any political movement which seeks
to mobilize the people… against a state which
is either controlled by vested interests or too powerful in itself.”

The term “populism” has returned to the daily vocabulary of political pundits and analysts trying to make sense of the recent seismic shifts in the politics of many capitalist democracies. For the most part the term is used loosely, with no definition to guide the reader. There was the “populism” behind the unexpected surges in support for Bernie Sanders in the U.S. primaries and for Jeremy Corbyn in the UK election. Then there was the “populism” at the roots of the National Front’s Marine Le Pen winning a place in the final runoff of the French presidential election. And one cannot forget the “populism” of many angry white men pushing Trump over the top into the U.S. White House. 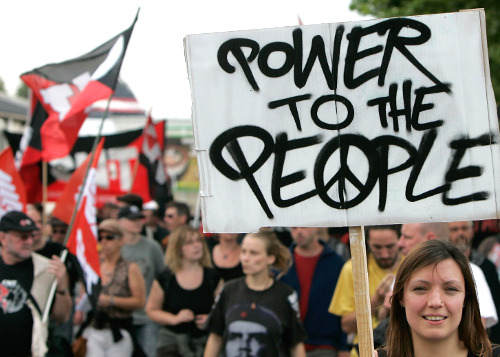 Commentators on the political scene in the established media typically use the term “populism” simplistically and pejoratively. This is a blind, thoughtless, and ill-conceived attack on decades of predictable stability in our democracies. There is a sense of imminent danger conveyed – where will this upheaval lead? The consensus seems to be that populism is something to be feared and contained. It is irrational – a modern expression of mob psychology. Often facile comparisons to the rise of Italian fascism and German Nazism are tentatively made.

Some commentators attempt a deeper analysis, aware that a simplistic notion of populism cannot account for the complexities of the phenomenon. Hence, there is the “left-wing populism” of Corbyn in the UK, Sanders in the U.S., and Mélenchon in France, and the “right-wing populism” of Trump in the U.S., the Independence Party in the UK, and Le Pen in France. Indeed, the two varieties of populism have emerged to become challengers to political orthodoxy in most European countries. Both left and right populism condemn neoliberalism and globalization for their terrible consequences for the underclasses. Both have little faith in the existing political system, and their base was previously largely disengaged from the electoral process. Both blame current élites for the troubles the people face and the hardships they endure.

But the differences are fundamental. Left populism blames the system – neoliberal capitalism – and seeks systemic change. To achieve this change requires the capture of state power and its use to end austerity by raising taxes and increasing social spending, to take measures to reduce inequality, and to end the uncontested power of the super-rich. Left populism rejects white nationalism, xenophobia, and racism. Right populism blames the current political élite, not the economic élite, and deplores a rigged political system that shuts them out. They embrace white nationalism and hark back to earlier times when “white privilege” was intact. Their economic woes are blamed on the cheap labour available offshore, luring factories to foreign nations, and the cheap labour of immigrants at home stealing their jobs. They yearn for a return to the golden days of the past when jobs were plentiful and life was prosperous and secure.

We can perhaps learn from the past. Twentieth century populism unsettled established capitalist politics in Canada and the U.S. from the turn of the century to the Great Depression. Left agrarian populist movements in Canada organized the Progressive Party challenge in 1921, denouncing the Special Interests and the plutocracy of the élite, demanding progressive reforms and thus ending the cozy two party domination of Canadian politics by the Liberals and Tories. They were joined in that challenge by militant trade unions and working class socialist parties. In the Great Depression left agrarian populist and working class organizations joined forces in Saskatchewan, founding the Farmer-Labour Party/CCF, driving to power in 1944. The threat of the CCF on the federal scene contributed to the rapid construction of the welfare state. In the U.S. left agrarian populist organizations, militant trade unions, and a small working class socialist party fused with the Democratic Party, providing much of the impetus and energy for the election of Franklin Roosevelt and the implementation of the New Deal. Class analysis, and sustained political and economic class struggle contesting for state power, were the essence of the movements both in Canada and the USA.

Class and class struggle has returned to political contestation in today’s late capitalism, thanks to neoliberalism’s dismantling of the welfare state and the cruel, remorseless exploitation of the underclasses in both the advanced world and abroad. So far left populism seems to be the more ascendant, as right-wing populist parties in Holland, Austria, Germany, Finland, and the UK suffered recent electoral setbacks, while left-leaning populist parties enjoyed growing support. Only in France does the right populist challenge remain strong, Marine Le Pen’s National Front. But it faces an equally popular left populist movement, Jean-Luc Mélenchon’s La France Insoumise. And in the UK the right populist Independence Party (UKIP) was wiped out as Corbyn’s Labour Party came within striking distance of forming government. Meanwhile Trump’s right-wing electoral coalition is disintegrating around him.