For the vast majority of unions in Britain, the idea of the Labour Party fighting a general election with a dream leadership team of Jeremy Corbyn and John McDonnell was manna from heaven after the era of New Labour. From 1997 to 2010, many unions believed Labour governments were a case of “power without principles.” The unions did manage to get Ed Miliband elected as leader in 2010, rather than his more centrist brother David, but that did little to shift the balance in the equation between power and principles come the 2015 general election. 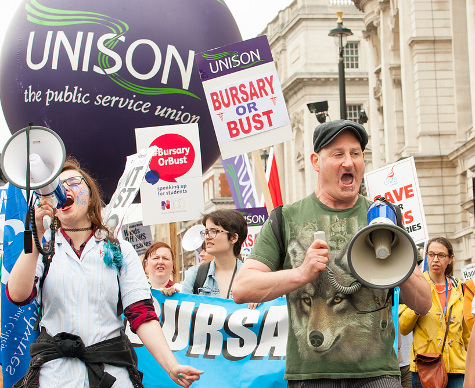 The latest vote witnessed an unexpected and significant Labour advance despite a viciously hostile press and deep internal party divisions. Theresa May’s gamble on a snap election has failed miserably; a hung parliament the result. But Corbyn’s union backers are still likely to find themselves holding principles without power.

The 14 unions affiliated to the Labour party, representing some 3.5 million members, were joined by non-affiliated unions like the PCS civil servants’ union and the RMT transport union in urging members and their friends and families to vote Labour. Corbyn and McDonnell aligned Labour with unions’ ideology more than ever before; their reward came in organized events like “Trade Union Tuesday” on June 6 when union members were encouraged to get out and campaign for Labour.

These campaign efforts may have been more in hope than expectation, given the extent of the Conservative lead in many polls, but the results that came in overnight brought a Labour victory frustratingly close. And despite a clear surge in support, unions now face the prospect of a weakened Conservative party, aided by the Democratic Unionist Party (DUP) in Northern Ireland, will govern with a sustained focus on austerity, making no effort to close the gap between rich and poor, pursuing further privatization and seeking to water down employment rights as part of its Brexit plan.

So what do unions do now? Labour politicians might suggest starting preparations to win the 2022 election (or even an unscheduled one before then). But that will be scant comfort for the 6.5 million union members seeking progress in the here and now.

“Even election winners can find themselves in office but not in power.”

But what if the Labour party, working with the unions, decided that the best course of action, for now, is to be found outside parliament? Even election winners can find themselves in office but not in power. When the margins are as tight as they now seem, real political power depends on citizens either positively accepting the new government or at least reluctantly acquiescing. When neither seems guaranteed, then it may well be that there is more value in opposing the new government through extra-parliamentary resistance. Indeed, a weakened coalition government, with May at the helm or any other Conservative, will be more susceptible to external pressure.

This would revive memories of the early 1970s when the new Conservative government of Edward Heath was made a lame duck by popular opposition. His Industrial Relations Act 1971 became a dead letter after a massive struggle by the unions and he performed a number of critical U-turns. Come the election of February 1974, when he posed the question, “who governs Britain?,” he was told it was no longer him.

But unlike the early 1970s, the Labour party now has a leader who will not have to be forced into supporting extra-parliamentary resistance. When the union movement contemplated mass resistance to the Conservative-Liberal Democrat coalition after the 2010 general election, they did not find much of a friend in Ed Miliband. The critical question now is whether Corbyn and McDonnell – as key national figures – will lead the extra-parliamentary resistance on behalf of the unions.

If they did, along with the left-leaning leaderships of most major unions, this could become an irresistible force. If the 1970s are too long ago to recall for many, the fight against the poll tax in the late 1980s and early 1990s is a more recent example of successful extra-parliamentary action. Through a campaign of non-payment, Margaret Thatcher’s robust image as the “Iron Lady” was left as scrap; she was gone by November 1990.

What Corbyn also has to offer is that he has connected with young people, evidenced by his two campaigns for the Labour leadership, the setting up of the Momentum movement from the first of these campaigns and his strong polling with younger voters.

So can the vigour of youth be used to create for the unions a popular rebellion like that of the early 1970s? It will certainly be needed as levels of strike activity remain very low. For the unions, the problem in helping to be part of that rebellion is twofold. First, union membership among 18 24-year-olds is well under 10%. Second, union membership is stronger (at around 30%) among workers aged over 50 but many of these workers were not especially favourable to Labour during the campaign.

To be part of the rebellion, unions have to both mobilize young people who are not yet their members, and old workers who are already members. But fusing struggle in the workplace and in communities – like combining the fight against the Industrial Relations Act 1971 and the poll tax – could offer the most effective way for the unions and the Corbynistas to mount a rear guard action against a new Conservative-led government elected by less than 30 per cent of those entitled to vote.

It will then be important to see what comes of a Trades Union Congress call for a meeting of public sector unions on June 14. Mark Serwotka, PCS general secretary, has called for that to be a “council of war” in the event of a Tory victory. In truth this is not yet iron-clad. Should the Tories’ coalition with the DUP quickly hit rough waters then we might find ourselves all back at the ballot box sooner than we might like. That would truly be “game on” for the unions after decades of neoliberalism and austerity. •

This article first published by The Conversation.

It doesn’t matter where you begin. Canterbury, Tory since the First World War, went Labour. Labour took over Portsmouth South, a Tory–Liberal marginal. Nick Clegg lost Sheffield Hallam, the Tory ministers Jane Ellison and Ben Gummer were ousted, and Amber Rudd was only barely saved by the recount. A string of bellwethers, such as Warwick and Leamington, Reading East, Ipswich, Peterborough and Enfield Southgate, turned Labour. Mountainous Scottish National Party (SNP) majorities fell. Supposed London marginals such as Ealing Central, Tooting and Hampstead and Kilburn became safe seats. Labour had its biggest surge in vote share since 1945, with Corbyn racking up just short of 13 million votes, 40 per cent of the total, after coming from twenty points behind. The political map has been completely re-drawn. 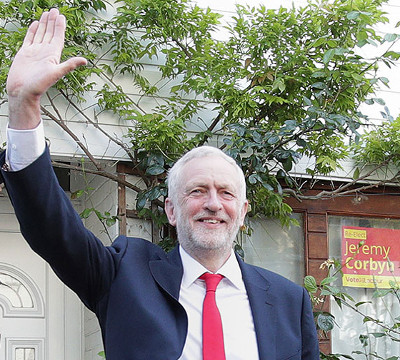 Just as important was the dog that didn’t bark. The “UKIP effect” was, for good reasons, expected to maul Labour in the rustbelts of the North and West Midlands. Not a bit of it. Except for a few interesting cases, such as Stoke and Mansfield, Labour came back with increased majorities.

It is hard to remember, in the face of all this, that Labour didn’t actually win the election. Because, while Jeremy Corbyn didn’t become Prime Minister, he did pull off the most stunning upset in recent political history. And he did this by turning out voters who, according to all received wisdom, would never vote, above all the young and poor.

The campaign had many surprising echoes of 1997. Corbyn, for example, has cheerfully appropriated the New Labour slogan of “the many not the few” and given it a far more radical inflection. He spoke the language of opportunity and aspiration, but he gave it a collectivist rather than individualist content. Corbyn is sometimes accused of populism. The appropriate term is class politics. Labour ran an unashamed class-driven campaign. It promised to tax the rich, and the large corporations, to pay for council house building, nationalized utilities and rail, and free education. It promised to abolish zero hours contracts, raise the minimum wage, abolish the anti-union laws, and end benefit sanctions and the bedroom tax. There was a promise to review council tax and look at implementing a far more progressive Land Value Tax. It also incorporated the usual gamut of left-wing “post-materialist” themes, including ambitious targets for reducing pollution, and making free wifi available across the rail network. The media response was somewhere between condescension – long on passion, short on details, claimed the BBC’s Nick Robinson – and panic, as the right-wing press decried a looming garden tax. But it was, unmistakably, widely popular and the clear turning point in the campaign. The elderly UKIP voters who switched to Labour, and the young who turned out, would not have come out for anything less.

Class cut across generations, but it also cut across nations. Britain is a multinational state in crisis. The Scottish National Party (SNP) and UK Independence Party (UKIP) have been two very different faces of this crisis, but both have just experienced major setbacks. It was assumed that Labour could only win in this situation by becoming a wan imitation of UKIP. But this wouldn’t have worked. Flag-waving is patronizing, unconvincing and off-putting to the voters Labour needs. Campaigning from the Left, on the other hand, reminds people of what they like about Labour.

But the generational change is also real. In a perverse way, the attacks on Corbyn allowed him to score unexpected wins on this front. Attacking Corbyn’s supposed IRA “links” is a classic Lynton Crosby strategy, but twenty years after Good Friday, it only excited a layer of older right-wing men. Corbyn’s insistent even-handedness in condemning all the violence, and his early advocacy for republican prisoners and willingness to meet Sinn Féin, look forward-thinking. His critique of the “war on terror” articulated what has become a common sense, especially for those who grew up in the years of Stop the War. This helped him defeat May on what was supposed to be her turf.

Of course, Labour was helped by a hopeless Tory campaign. May lost a lot of her presumed regal authority by running away from debates, ducking questions and U-turning. But May had been exposed from the Left. Her rightist version of class rhetoric, her patronizing appeal to “ordinary working class families,” might have worked had Labour not offered a far more hopeful agenda. Likewise, had Labour tried to tail the Tories on terrorism, as it would traditionally have done, May would have controlled the narrative. Corbyn’s backbench critics won’t like it; neither will the increasingly irrelevant tabloids, nor the Crosbyite spin machine. But the biggest way in which the political map was re-drawn is that the horizons of possibility were radically expanded. We used to hear there was no alternative. Now the alternative is clear. •

Richard Seymour is the author of Corbyn: The strange rebirth of radical politics. This article first published by The Times Literary Supplement.

Gregor Gall is Professor of Industrial Relations, University of Bradford. He is the editor of Scottish Left Review and the director of the Jimmy Reid Foundation.