‘Things are serious’: Update on the French Presidential Election

“C’est grave,” (things are serious) said the monsieur who sells me the papers every morning. A resident of Mantes-la-Jolie (a working class town at the western edge of the Paris region), he laments a lack of clarity on the dangers of the Front National (FN) not only among colleagues and neighbours but also parties and politicians. 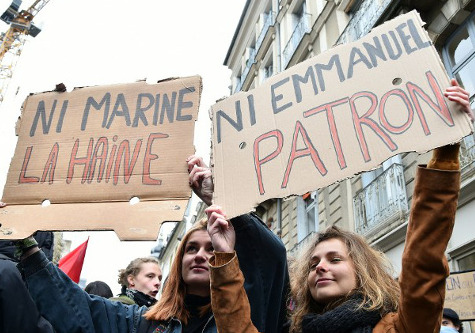 The situation in France is indeed serious. A week before the second-round vote, Marine Le Pen has made progress in the polls but still trails Emmanuel Macron by a margin of about 18 per cent. However, analysts have pointed out that mass abstention could bring her within winning range. There is no need to be alarmist to make a sober observation: a defeat of Le Pen is not a foregone conclusion.

As we speak, a number of dynamics favourable to Le Pen are unfolding. In 2002, father Le Pen’s presence in the second round of the Presidential election produced a ground swell of anti-FN mass mobilization. As I write these lines, days after a round of high school student street protests against Le Pen and Macron, and hours before the May Day marches, no such mobilizations have happened so far. There are a number of reasons for this.

On the right, a constellation of FN support is emerging. The right sovereignist and self-described Gaullist Nicolas Dupont-Aignon, who garnered almost 5 per cent of the vote in the first round, declared his support for Le Pen in return for a promise to be appointed Prime Minister. The Republican candidate Francois Fillon, who received 20 per cent in the first round, supports a vote for Macron, but not all of his supporters are following him. During Fillon’s Thatcherite, social conservative and ‘anti-system’ campaign (which blamed judges, opponents and the media for his own corruption scandal), many of these had already said, quite logically, that they would support Le Pen more than Macron should Fillon fail to reach the second round. Most prominent among those refusing to heed his current advice to vote for Macron is the right-wing Catholic organization Sens Commun, which emerged in 2013 from the mass mobilizations against
gay marriage. Unlike Muslim and Jewish organizations, the Catholic Church (and the Pope) has not come out against Le Pen (it did in 2002).

In turn, Macron’s camp has been unwilling to draw attention to the concrete authoritarian, anti-social, racist, patriarchal and, yes, neo-fascist pillars of the Front National, and to subject its organization, milieu, programme, and municipal policy record to closer scrutiny.
Macron has accepted to debate Le Pen on primetime TV (which Jacques Chirac refused to do with her father in 2002). He also continues to
normalize her presence by treating the FN as a party like any other, going out of his way to acknowledge Le Pen’s humanity. Meanwhile, in his tepid and mediocre campaign, he continues to peddle the kind of neoliberal and security-oriented policies that produced mass resistance and led to François Hollande’s downfall. Macron’s tight connections to France’s ruling circles (in state and capital), his economic neoliberalism, his acceptance of the Fifth Republic and the European Union as they are currently constituted, his opportunism and arrogance, continue to make him an ideal opponent for Le Pen.

The left is pulling into varying directions. On the one hand, Benoît Hamon (the Socialist Party candidate who was decimated at the polls), the Communist Party (which supported Jean-Luc Mélenchon), and unions like the CFDT have issued calls to vote Macron in order to defeat Le
Pen. On the other hand, members of the far left tend to vacillate, on the ground, between the former position (voting against Le Pen by voting for Macron) and a ‘neither Macron (‘banker’) nor Le Pen (fascist)’ position. Various anarchist groups, including those directly involved in current street protests, combine the latter ‘ni-ni’ (neither-nor) position with a principled opposition to
electoral participation. After riding the tide of anti-Hollande mobilizations almost into the second round, Mélenchon and his France Insoumise (FI) waited for more than half a week to proclaim its preliminary position, thus giving Le Pen a chance to suck up to Mélenchon voters. The FI’s position (‘no vote for Le Pen’, whether by abstention, a blank vote, or a vote for Macron) resonates with the position of trade unions CGT and Solidaires, which are most active in an anti-fascist union network.

All those on the far left who have been heavily involved in the mass mobilizations against the Labour Law reform and police violence, are caught in a dilemma:
how to underline the grave danger of the Front National without pretending that a Macron would stop the neo-fascist threat for good, or without demobilizing those who have spent enormous energies fighting Minister Macron, Prime Minister Valls and President Hollande. At the same time, they face a basic problem: how to translate a basic factual observation (that those defending capitalism and economic liberalism help prepare the ground for fascism) into a strategic orientation that is more subtle than the equation one frequently hears about or sees sprayed on city walls: Macron 2017 = Le Pen 2022. Turning the connection between authoritarian neoliberalism and neofascism into an automatic link, this simplistic equation assumes that emancipatory forces are too powerless to have an impact on the course of history.

In contrast to 2002, a greater number of French citizens think that the supposed normalization of the Front National (a normalization produced more by the policies of the Republican right and the Socialist left since 2002 than the FN’s own strategic adjustments since 2011) has eradicated any significant difference between the FN and mainstream parties, that the very real erosion of ideological and other barriers between the FN and other political formations has turned the former into just another party. However, a range of principled left-wing and anti-racist voices have pointed out that this assumption does not hold up to closer scrutiny; indeed, that the belief in this assumption is a luxury those most immediately affected by an FN victory (including Muslims, foreigners, immigrants, non-whites) and those next in line (anarchists, union activists, other militants, LGBTQ people, women, workers and the poor) can least afford. To underscore this point: far right militants have started to confront the high school students protesting both Le Pen and Macron.

In light of these developments, debates on internet fora and in newspapers have raised a number of basic but urgent questions about tactics and strategy in what is a contradictory and volatile situation:

As Youssef Boussoumah, a member of the Parti des Indigènes de la République (which helped organize the mass march against racism and police violence on March 19), pointedly asked in a social media post a few days ago: “what stops us from getting rid of the pest (Le Pen) on May 7 and eliminating cholera (Macron) the day after?” The question deserves to be asked at every occasion. •

Stefan Kipfer is Associate Professor in the Faculty of Environmental Studies at York University, Toronto. He is currently on sabbatical leave in France.

Stefan Kipfer is a member of Free Transit Toronto and teaches at York University, Toronto. Follow his tweets at @StefanKipfer1.