Disabled people in Ontario are much more likely to experience poverty than non-disabled people. Many have to live on sub-poverty payments under the Ontario Disability Support Program (ODSP) or the even more wretched income provided by Ontario Works (OW). Those that are in this situation are confronted by an ongoing process of surveillance, invasion of their privacy and moral policing. Those disabled people who are working, because of systemic discrimination, are less likely to be receiving living wages and are far more likely to be precariously employed. As anti poverty organizers, we fully understand the anger and desperation that such a situation generates. 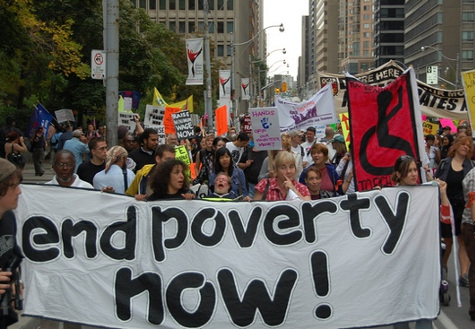 On this basis, it is easy to see how, at first glance, there are aspects of a Basic Income (BI) approach that could be found attractive by disabled people. The promise of a somewhat higher payment, provided without the kind of intrusive element that presently exists, would seem to represent a step forward. However, we think it’s important to ask why the Liberal Government would suddenly support a new approach that would mean considerably increased costs. Why would a Government that has driven down the adequacy of benefit rates and cut programs for disabled people want to reverse course so dramatically?

BI can look very alluring but we are convinced that, in reality, it will mean a degrading of the already inadequate ‘social safety net’ that will make things dramatically worse for disabled people. The Ontario Government’s adviser on BI, Hugh Segal, has proposed a pilot project under which a small sampling of people on OW would have their income raised to $1,320 month. A group on ODSP would be paid $500 more than they are at present. In both cases, the money would be provided without much of the scrutiny and intrusion people presently have to put up with. There is no doubt that the small number of people who became part of such a project would be better off for as long as it lasted. However, it is unlikely that the Ontario Government will run the test at income levels as high as their advisor suggests. Moreover, while a small minority of people are being tested in this way, over a period of several years, far greater numbers will be living as in deep poverty as before on OW and ODSP. There is also no reason to assume that any Province wide system of BI that was eventually adopted would provide the same income as under the pilot project.

It seems curious that the Liberals are ready to offer the promise of long term improvement by way of Basic Income while they flagrantly ignore the glaring problems with the existing system of social assistance and other poverty causing factors that they could deal with immediately. Raising social assistance rates and the minimum wage, building more affordable housing, ensuring that homeless people at least had basic shelter, developing free or low costs pharmacare and dental programs, expanding disability related benefits for all low income people and eliminating the long waiting lists for things like attendant care and supportive housing are all things that they could act upon now to make a real difference in peoples’ lives. If they won’t do things, why should we believe that they want to redistribute wealth and alleviate poverty but way of a system of BI.

The Ontario Liberals have established a long and very ugly record of imposing an agenda of imposing austerity and attacking public services. We might ask ourselves if there is a danger of BI being implemented in such a way as to deepen, rather than reverse, that agenda. During the years of they have been in power, the Liberals have driven down the adequacy of social assistance and, apart from the money this has saved them, this has created a situation where people are more desperate and ready to accept even the lowest paying and most exploitative jobs. By making ODSP ever harder to get onto and, by allowing the rates to fall lower against inflation, they have ensured that disabled people are frequently forced to be part of this scramble for the worst jobs on offer. Indeed the reference to setting up a pilot project that was contained the last Provincial Budget actually stressed that there was a hope that Basic Income could “strengthen the attachment to the labour force.” The real danger with a BI system, as it might actually be designed by an austerity driven government, is that it could be a basis for making things even worse.

The right wing U.S. political scientist, Charles Murray, advances a version of BI that calls for a wretchedly inadequate payment of $10,000 a year to be provided but, Murray stresses, it is essential that this payment replace all the other elements of social provision. At a time of mounting austerity, with public services at acute risk of privatization, this is exactly the way in which BI could further a regressive agenda. Even a payment that is somewhat higher than under the present social assistance rates would still be a step backwards for disabled people and poor people in general if it was used to justify and increase the attack on public services and other benefits. Things like the Special Diet, medical transportation and the child care benefit might be targeted. What good would a slightly higher payment be if, as part of the new arrangement, people now faced exorbitant costs for things like hearing aids, wheelchairs, prosthetics, medical supplies and respiratory devices? If BI opened the door to such regressive measures, it would lead, not to reduced levels of poverty, but to a very much worse situation.

The kind of Basic Income we might expect the Ontario Liberals to design would turn the social safety net into a tightrope. The network of present systems is undoubtedly inadequate but a system of universal payment would be even more vulnerable to austerity and the impact of allowing it to fall against inflation or of reducing the level of the benefit would be enormous.

For all the talk of a ‘no strings attached’ system of income provision, governments that are looking at BI or designing pilot projects are very focused on issues of how the system might serve to prod people into low paying jobs. Linked to this, are the old notions of molding poor people into becoming ‘productive’ conforming workers and consumers. This is why coded language around the reconstruction of people can be found in BI literature. For example, the Manitoba Liberal Party supports the implementation of a guaranteed income on the grounds that it would help in “the building of self-reliant, taxpaying citizens.” Similarly, Ontario’s report on BI argues that behavioural changes and increased independence are important goals. The old moral assumptions have not really disappeared.

There are different ways that a BI could be implemented. The Ontario Report suggests that disabled people get $500 extra in recognition that the “costs of living with a disability” are higher than those faced by non disabled people. However, this isn’t true in the same way across the board. The expenses of someone having to pay the daily cost of a service dog, someone who needs special dietary items, someone who must pay for attendant care, someone who has to pay for ASL interpretation or someone who has to replace a $40,000 wheelchair are all very different. If BI were used as a pretext to eliminate other systems of support, there are a whole range of needs that different disabled people have that would be placed out of range for them.

Importantly, who gets the disabled top up will revolve around how the Government defines disability. Lots of those who are disabled will not be accepted as such. The definition of disability is very limited in terms of accessing ODSP and it’s likely that the vast majority of disabled people will not qualify for the additional payment under a BI system. Governments are presently working to narrow the concept of ‘disability’ and the introduction of a new income support system would likely offer an opportunity to take that further.

Right now, we are being told that we are at a crossroads and there are two possible futures. One in which things remain the same with inadequate social assistance rates and rampant poverty or one in which everyone gets a BI payment at 75% of the poverty line in Ontario, making it supposedly easier to escape from poverty altogether. The second, BI future will require study, public consultations and several years to put into place but we are told it’s the best possible outcome. [Ed.: see LeftStreamed No. 346 for a debate on Basic Income.]

One of the main arguments for BI is that social assistance is deeply flawed: the rates are too low and it is punitive and degrading. However, it isn’t necessary to pin hopes on BI to fix these things. The Government could raise social assistance rates to decent levels but it has made the deliberate choice to perpetuate the suffering of the poorest people in Ontario. The Government could eliminate the policies and structures that make social assistance so punitive. It could make the system fair and respectful and expand benefits to all disabled people but it chooses not to.

A lot of people who promote BI have very good intentions. This isn’t the case, however, for Kathleen Wynne’s Liberals and other governments that are investigating BI. They intend more cuts and to increase pressure on people to scramble for the worst jobs. Rather than pin our hopes on the flawed concept of BI, so easily implemented in ways that further a regressive agenda and harm disabled people, we suggest fighting for adequate income, living wages, improved, expanded and accessible public services and income support systems that are adequate and free of surveillance and moral policing. This won’t be won by trusting governments to do the right thing but through strong collective struggle. •