Despite the fact that France is not yet out of the economic stagnation that followed the 2007-08 crisis, Emmanuel Macron and François Fillon want to continue and to intensify the policies of cuts to public expenditure, dismantling the social and State labour-rights, that were applied without pause by the previous governments. These policies have only served the richest in society. They only lead to immerse the country in the vicious circle of unemployment and precariousness, terrain of the rise of the FN [Front National] whose false social “varnish” can barely hide their profoundly racist and xenophobic nature and the incoherence of their economic propositions. 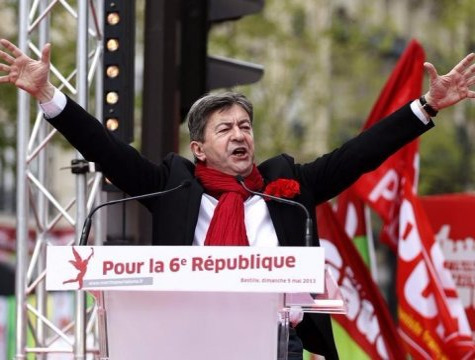 On the contrary, the solutions proposed by Jean-Luc Mélenchon are, in our opinion, the only ones capable of responding to the five major urgencies of our time. They form a coherent and rigorously calculated framework that takes into account budgetary equilibria, not by joining a race toward austerity but by proposing a detailed and ambitious economic program that relies on a higher level of fiscal justice, an investment policy and an emancipation with respect to financial markets.

The first urgency is to lower the unemployment rate, which today stands at 10 per cent of the active population and 25 per cent for youth. In this respect, it is necessary to create some space for manoeuvre by putting an end to an expenditure that is useless and harmful for the collective: fiscal expenditure. The “Responsibility pact” and the CICE [tax credit for employment and competitiveness], which will cost taxpayers €41-billion in 2017, are totally inefficient regarding employment. In a context of insufficient demand in France and in Europe, and given chronic under-investment during Hollande’s five-year term, it is now urgent to have an ambitious “relaunch” policy to stimulate economic activity. On this point, Jean-Luc Mélenchon’s proposed plan to invest €100-billion over 5 years is suitably dimensioned. It reasonably focalises expenditure onto core sectors that have a high multiplier (energy transition, school infrastructure, public transports, health, etc.) and that are hardly or not at all exposed to international competition; these criteria guarantee the plan’s effectiveness as well as its financing, as recommended by a recent report on this topic.1

To get out of budgetary austerity and wage austerity, other measures are more than necessary, like a revaluation of the SMIC [minimum wage], pensions or “minima sociaux” [welfare benefits for the worst off], as well as a real policy of wage equality between men and women. Combined with an ambitious policy to reduce working time (a 6th week of paid holidays, effectively applying the 35h [rule], limiting forced part-time jobs, …), a policy that considers the State and public administration as the employer of last resort shall propose training and quality jobs of high social added value (infrastructure construction, work with not-for-profit organizations, work that contributes to the ecological transition, etc.) to any person who wishes to and is able to work, such as the unemployed, those who wish to work but have given up job-searching, or those unsatisfied with having to work only part-time, etc.

While calling foul any increase in expenditure, the detractors of Jean-Luc Mélenchon forget to mention that the new cuts that they intend to apply will lead to a higher rate of unemployment and a degradation of public services. On the contrary, by engaging in a “relaunch” plan that France and the EU should have started a long time ago, the tax revenues generated [by Melenchon’s plan] will reduce public debt, allowing us to get out of the deadly debt trap generated by austerity policies.

The second urgency to which France must answer is to stop the deepening of inequalities that has been taking place since the 1990s, in order to put an end to the dizzying increase of the wealth of the richest2 and to remedy the injustice of our fiscal system. Inequalities affect households as well as enterprises, of which SMEs have much higher effective tax rates than large corporate groups.
A more egalitarian society is a happier and more democratic society. On this topic, Jean-Luc Mélenchon’s program foresees a detailed and coherent fiscal revolution, both for households (with a more progressive income tax, thanks to an increase in the number of tax brackets from 5 to 14) and for enterprises (with a reduction in corporate taxes to 25 per cent for all enterprises, together with the abolition of many fiscal “niches” [exemptions]), as well as an increase in the taxation of capital. Only such a refoundation of the tax system shall correct rent-seeking and wealth-capture phenomena by an increasingly smaller privileged minority.

The third urgency concerns industry. It is a matter of combatting the financialization of the economy that has caused important damages to our productive fabric, and, through it, to the third sector, often dependent on industry. For our industries to be able to upgrade, the endowment and missions of the Public Investment Bank must be expanded. Issuances of credit and acquisitions of equity must go beyond the strict logic of financial profitability and give priority to a long-term vision. The control of the French banking system by the Banque de France must be reinforced and the separation of investment and retail banking must be applied without delay. Speculative capital flows must be controlled so that speculation stops damaging investment. Entrepreneurship must be refounded and have as a goal the production of goods and services in the common interest of the ensemble of the stakeholders and not only of the shareholders and owners. The fact of giving enterprises an objective other than mere profit allows to call into question the notion, not based on law, of “ownership of the enterprise,” and is such that the power of entrepreneurship no longer stems from the mere ownership of capital. In a first stage, this shall happen via an extension of the rights of employees: right of the “comité d’entreprise” [staff committee] to block/suspend reorganization and restructuring processes; real right of preemption for employees in case of shutdown or of sale of the company by the shareholders.

Faced with environmental and climatic urgency,3 our country must give itself the means to undertake a credible and large-scale ecological transition. Such a bifurcation of our production model must necessarily be started off by public investment and requires a consumption that is of higher quality. It implies a break from the financial short-termism logic of the last three decades that destroys jobs, breaks millions of lives and continues to damage the environment. In this respect, the ecological planning proposed by Jean-Luc Mélenchon, together with the reorientation of credit and with the creation of a public banking “hub,” is essential. It will improve the health of the ensemble of the population by increasing the quality of basic goods. From this perspective, measures such as 100 per cent bio in cantines, or giving priority to locally-produced goods, are emblematic.

Finally, it is urgent to deeply transform the absurd edifice of the European treaties, which de-possesses States from their macroeconomic policy levers, pushes them to a social and ecological race to the bottom and to a regression without end. The stranglehold of the current treaties forbids any relaunch policy and any industrial policy, which are nevertheless more indispensable than ever to face the economic, social and ecological urgencies. The single currency, incomplete, imposes on States competitiveness adjustments that are very painful socially and economically.

In Europe, only the establishment of a credible balance of power can allow for a wide reform of the economic and monetary Union that finally guarantees social progress and upward convergence for the peoples of Europe. Jean-Luc Mélenchon assumes on this point a convincing strategy of disobedience and dissuasion. In France, his government will take all the unilateral measures necessary to put his program in practice, going as far as needed beyond the strict application of the treaties. The European institutional edifice will then be able to be refounded, and the euro completed,4 in order to guarantee a real convergence between economies. If not, and to prevent a meltdown to come, it will be necessary to dare to quit the euro in order to better save Europe.

By answering these five major economic urgencies of our time, today the economic program of Jean-Luc Mélenchon gives us the historic opportunity to prove that there exist serious, credible and desirable alternatives to the absurd policies that were obstinately implemented during the last decades. This program will be put in place in the context of a democratic revolution, supported by the setting up of a constituent assembly. Today, our country has the unique opportunity to invert the deadly logic that pushes Europe toward implosion, and to give meaning and breath to the European project. Let’s take this opportunity! •

To sign this statement, send an email to: jeanneachevalier@gmail.com. Published in the French newspaper Libération, with list of signatories, 18 April 2017.