How Postal Workers Removed the Staples

“We Won! The US Postal Service and Staples deal is over!” proclaimed the headline on the American Postal Workers Union (APWU) website. A three-year battle against the outsourcing of living-wage, union postal jobs to the low-wage, nonunion Staples ended January 5 when USPS management informed the APWU that the “approved shipper” program in Staples Office Supply stores will be shut down by the end of February 2017. The union-initiated boycott of Staples was called off. 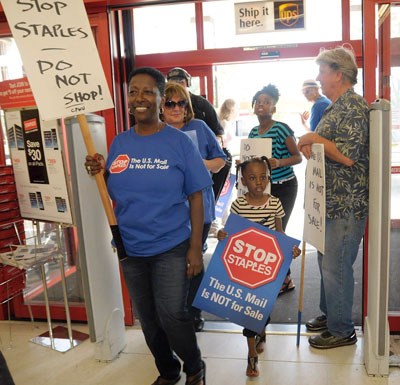 “I never doubted that if we stayed the course, stuck together and kept the activist pressure on, we would win this fight,” said APWU President Mark Dimondstein in a statement.

The hard-fought battle engaged thousands of union activists and supporters since Staples opened “pilot” postal counters inside 82 stores in California, Georgia, Massachusetts and Pennsylvania in early 2014.

A newly elected union leadership, under Dimondstein’s direction, took a bottom-up, direct-action approach to the fight, paying postal workers on “union time” to organize community pickets, petitioning and leafleting at the “pilot” stores. Postal retirees, activists from the three other postal unions and solidarity from the entire labor movement kept the heat on for three years.

The boycott received a huge boost from the two teachers’ unions – the American Federation of Teachers and the National Education Association – whose members stopped buying school supplies at this largest of the national office-supply chain stores.

More than 100,000 postcards were delivered to successive Staples CEOs, and members of the Staples board of directors were confronted at their places of work. Local coalitions, such as Communities and Postal Workers United and Community-Labor United for Postal Jobs and Services, staged disruptive store “invasions.” Occupy Wall Street activists in Berkeley, California, camped out for weeks in front of a local Staples.

The APWU also used several legal initiatives to keep Staples from expanding the program, as it had vowed to do, to all 1,600 Staples stores. An unfair labor practices complaint was sustained by the National Labor Relations Board, charging the USPS with failure to bargain over the contracting-out of union jobs.

The APWU also intervened in an attempt by Staples to merge with Office Depot, successfully convincing the Federal Trade Commission to nix the deal and forcing Staples to pay a $250-million penalty. Staples stock plummeted, and dozens of stores closed.

The APWU also convinced the USPS Inspector General to investigate charges that Staples was costing the postal service large sums in revenue, trashing its brand and reducing the security of the mail.

The APWU didn’t object to expanding postal services as long as new “postal units” were staffed by actual postal employees. In fact, the APWU and other postal unions have been in an ongoing battle to stop the USPS from closing down post offices and reducing hours in the ones that remain.

At one time, “we had, in almost any city of any size, air mail units that were open 24 hours a day,” said Dimondstein. “Those have been pretty much shut down.”

As the largest unionized employer in the nation, with a 21 per cent Black and 40 per cent female workforce, the postal service is known for providing stable union jobs with a good salary and benefits, having a hiring preference for veterans, and respecting strong protections against discrimination.

Delivering to 150 million addresses every day, the USPS handles half the world’s mail, at the most affordable, universal rates. In contrast to the decline in first-class mail volume due to the Internet, there has been an explosion of parcel volume, also thanks to Internet online shopping.

With more than 500,000 workers, 200,000 vehicles, 35,000 post offices and an almost $70-billion annual revenue stream, the USPS is a big target for the neoliberal, union-busting, privatization agenda.

Since it was partially privatized under the Postal Reorganization Act of 1971 – when the USPS went off-budget and was mandated to be self-supporting and run “like a business” – postal workers and community advocates for a public postal service have been engaged in off-and-on skirmishes with corporate profiteers seeking to pick off its profitable portions of the operation.

Much of parcel and overnight delivery has been cherry-picked by UPS, FedEx and Amazon, while the USPS continues to provide regular service to unprofitable rural and inner-city customers. Pitney-Bowes, Amazon and other private mail-sorting houses have siphoned off 80 per cent of mail-processing volume as the USPS has “consolidated” half its sorting plants, eliminating over 100,000 jobs in recent years.

US postal workers and customers need only look across the Atlantic to see the devastating effects of privatization of postal services in the European Union, where 15 years of “commercialization” and “deregulation” have produced “overwhelmingly negative” results, according to UNI Europa Post and Logistics Trade Union.

“The post office network has been drastically reduced and replaced with private partners such as grocery stores or gas stations, offering a reduced range of services,” said a 2014 UNI report. As a result, prices have risen, unions have been busted, and wages and hours have declined. Mail delivery has been reduced in some countries to two or three days a week.

Ongoing Struggles to Save and Improve Public Services

US postal workers, when they have mobilized in the tens of thousands, have successfully beaten back attempts to contract-out letter carrying routes and eliminate Saturday delivery. Recent moves to close half the nation’s post offices, in mostly rural areas, were met with fierce community resistance, including a yearlong encampment on the steps of the Berkeley, California, post office.

Nevertheless, half of the country’s post offices have had their hours reduced, some to as few as two hours a day. Some USPS mail-sorting plants have been saved, especially after sit-ins and occupations by angry postal customers. Nevertheless, mail distribution standards have been degraded with, for example, the end of in-town, overnight first class delivery.

A recent move by Canada Post to eliminate at-the-door delivery – forcing customers to use neighborhood cluster boxes – was stopped with a grassroots, highly organized, disruptive and successful union-community campaign. The same change, to end door delivery, is currently being attempted by the US Postal Service and will need to be opposed.

The Staples campaign victory is an important high point in the struggle to save and improve the public postal service. Worker-community confidence and combativeness has been boosted – and this will be sorely needed in confronting the “public-private partnership” agenda of Trump and the Republican-controlled Congress. •

This article was first published on the Socialist Worker website.