A Terrorist Attack on Muslims in Quebec

On Sunday night, a young, white, French-speaking, Quebec-born man opened fire inside of a Quebec City mosque, killing six Muslim worshipers – Azzeddine Soufiane, Abdelkrim (Karim) Hassane, Khaled Belkacemi, Aboubaker Thabti, Mamadou Tanou Barry and Ibrahima Barry – and injuring 25. The six victims were first-generation immigrants who had lived in Quebec for years, some for decades. The shooter, Alexandre Bissonnette, had expressed anti-immigrant positions online and was a fan of Donald Trump in the US and France’s far-right National Front leader Marine Le Pen. 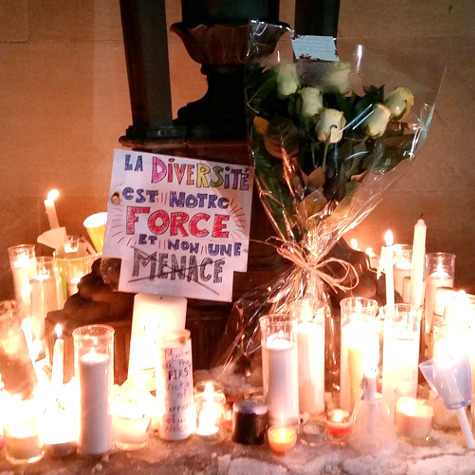 This leaves little room for doubt: The shooter acted upon political beliefs, in order to instill fear among Muslims and immigrants. This is a textbook case of right-wing terrorism. Yet the media coverage of the mass shooting and the official reaction of many politicians took many detours to avoid stating the obvious.

After the attack, the first wave of right-wing opportunism spread like wildfire when a false report began circulating that the attack was carried out by multiple Syrian Muslim refugees who had recently arrived in Canada. On social media, the right portrayed Syrians and Muslims as dangerous terrorists. Adrien Pouliot, leader of Quebec’s Conservative Party, happily took the bait, stating that the shooting proved that “Quebec was not sheltered from Islamic extremism.”

Many tried to come up with a tortuous explanation for why gunmen motivated by “Islamic extremism” might commit a massacre at a mosque, attempting to frame it as violence among Muslims spreading in our peaceful province.

When police released the name of two suspects they had arrested, it was clear that the initial report about Muslim shooters was wrong, but the damage was done. It revealed how Islamophobic opportunists were quick to use the event for their own ends.

Islamophobia from the Media and Politicians

Even as it became clear who carried out the attack, Islamophobic bigotry nevertheless continued, with the two suspects – Bissonnette and Mohamed Belkhadir – receiving very different treatment in the press. Belkhadir had actually been helping his wounded friends when police arrived on the scene. Seeing a person entering the mosque with a gun, Belkhadir feared that the shooter had returned, so he fled. This was enough for Quebec police to consider him as a suspect. It took the officers more than 16 hours to admit they were wrong. In the meantime, the media released his name and pointed to his Moroccan origin – as if this information could explain, by itself, his motivations.

On the other side, Bissonnette’s participation in the attack seemed to puzzle journalists and commentators. He was quickly depicted as a tormented and lonely boy, and a victim of intimidation at school. Though any investigation of his Facebook page quickly revealed his affinity with the extreme right, the media preferred to use interviews from neighbors claiming that he “looked normal,” and commentators began explaining his actions as driven by folly or mental illness.

It took a while before the terrorist dimension of the shooting was recognized. Pierre Bruno, news anchor for TVA, the most-watched TV channel in Quebec, labeled the act “inverted terrorism.” Obviously, for Bruno, violent acts committed by Muslims against Westerners count as terrorism, but not the other way around.

When the words terrorist attack were used by mainstream media to describe Bissonnette’s shooting, it was between quotation marks, as if there was still doubt about it.

The next day, politicians across the entire political spectrum tried to capitalize on the event. While the right wing expressed its grief and condolences to the families of the victims, leaders of the two provincial political parties at the forefront of nationalist discourse quickly defended their policies, arguing that there was no problem with Islamophobia in Quebec, and that the various xenophobic campaigns they have carried out had absolutely no relationship to the shooting.

By contrast, the popular response to the shooting was nothing short of amazing. It took less than an hour for the group Québec Inclusif (a left-wing feminist and anti-racist organization run by a diversity of women, many of them Muslim) to call for a rally in Montreal in solidarity with the Muslim community. Within a few hours, tens of other similar rallies were planned across the province, with thousands of Quebecers saying they planned on attending.

This network of solidarity began to bombard social media with criticism of the actions of the media and politicians. The media establishment was quickly besieged by objections to its covert Islamophobia, the racist treatment of Mohamed Belkhadir compared to that of Bissonnette, and the euphemisms used to describe the attack. It was only then that corrections were made – if they were made at all.

On the evening of January 30, less then 18 hours after the vigils were planed, some 15,000 participants gathered in Montreal and another 6,000 in Quebec City.

The Montreal event, planned by Inclusive Quebec, was an exemplary demonstration of solidarity. Muslim speakers took to the microphone, while thousands of Montrealers expressed their support. No politicians were allowed to the take stage, and the speeches decried the opportunists. As one person commented, “We do not want the solidarity of Islamophobic pyromaniacs: We want their apology.”

Protest organizers didn’t just organize a moment to collectively mourn a tragic event. They made it clear, through their speeches, that an act of “hate does not fall from the sky. It takes root in the social and political environment that nurtures it,” and that a message of unity alone was not enough. Real, tangible solidarity – a common front against racist politicians and the media – is needed.

The rallies are a beginning for the creation of this solidarity. Among the crowd, a large red banner echoed the sentiment: “Make racists afraid again.” •

Alain Savard is a PhD candidate in political science and union militant.