The Arctic Voyage of the Crystal Serenity

Celebrating the Beginning of the “End Times”?

“Global warming presents a clear and present danger to civilization.”

Capitalism’s four-century obsession with finding a more profitable route between the Atlantic and Pacific Oceans is finally satisfied. The voyage of the Crystal Serenity through the Northwest Passage proclaimed the route open for routine, if still risky, commercial shipping. The ship left Vancouver on 10 August 2016, arriving in New York on 16 September. The Northwest Passage reduces the voyage by 7,000 kilometers and an average of 14 days, compared to the Panama Canal route. The Canal will eventually fall into relative disuse – it will become too costly and too difficult, if not impossible, to accommodate the new increasingly gigantic ships, and often involves queues of up to 10 days. 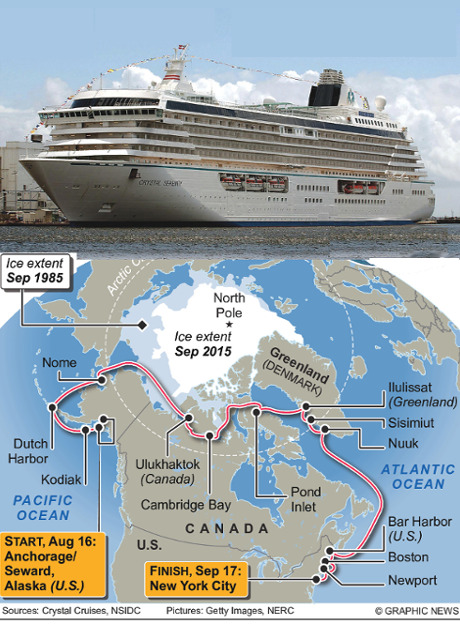 Of the many who died in the search for the Passage, some were motivated by avarice (huge cash prizes were offered for success), some by glory, and many by both. The most famous and tragic effort was the 1845 expedition of Sir John Franklin – his two ships disappeared and 129 men died. The dream of fame and riches, which drove so many to this usually futile and often fatal quest, has been finally realized. Global warming projections estimate the passage will become an all-year route at the earliest by 2031, and at the latest by 2100. Though not the first
successful passage of ocean-going vessels (there have been an estimated 60 just since 2012, including two modest passenger ships), the Crystal Serenity is the largest.

Cruisin’ for a Climate Bruisin’

There was something disturbingly grotesque about the voyage. The $350-million, 820 foot-long Crystal Serenity is a veritable floating Versailles palace. The 1070 passengers paid between $22,000 and $120,000 for the luxury experience: gourmet meals, high-end boutiques, health and beauty spas – every imaginable entertainment. The passengers were promised an “epic journey above the Arctic Circle” including “quaint villages,” “dramatic fjords,” “calving glaciers,” and even a visit to Beechly Island, the location of some grave markers of the Franklin expedition. Views of rare wildlife in their natural habitat were promised: Pearly caribou, polar bear, walrus, and musk ox. Those on this “ultimate expedition for the true explorer” would dine sumptuously throughout the journey, but not on each other as the men of the Franklin expedition did as starvation and death decimated their ranks.

Environmentalists, characterized by the captain as those with “big doctorates who criticize everything,” denounced the voyage. One referred to it as “extinction tourism,” since Arctic wildlife species are at imminent risk of disappearance. Others noted the ominous implications for the future of one of the last pristine environments left on the planet – such voyages will inevitably become more and more routine, given the profits to be made.

Crystal Cruises defended itself, insisting this was a green voyage: no garbage was left behind, as it was baled for future disposal; the daily 400 tonnes of waste water was partially treated and released three miles out; the ship’s fuel was low sulfur, resulting in a lower greenhouse gas contribution. These claims provoked sarcastic hilarity among environmentalists – just 400 tonnes of treated waste water per day will have a dramatic negative impact on the Arctic Ocean. Furthermore, despite this voyage’s extensive green measures, cruise ships in the future might be less worried about the opinions of environmentalists.

The Beginning of the End Times?

At a deeper level the voyage borders on the macabre, an unwitting dance on the graves of past, present, and future victims of the catastrophic upheavals already wrought by global warming and those yet to come. Arguably the Northwest Passage played the role of the proverbial canary in the coal mine. Its opening to large ships, and its near future as an all-year shipping route, signals global warming is accelerating beyond early projections. In 2012 Arctic ice reached a record low – the lowest since records began in 1979. The size of the ice pack has been falling for 33 years. All summer ice will be gone in 2100. 2014 and 2015 experienced the warmest average global temperatures in recorded history. Sea levels have risen between 15 and 20 centimeters in the last century, and in the absence of aggressive measures could rise from 15 to 95 centimeters by 2100 (most projections settle on 50). The melt will speed up when ocean temperatures reach the tipping point when the warming process begins to feed upon itself. That point is projected to be where the average increase passes 2 degrees and tracks toward 4.

The official goal is to hold global warming to an increase of 1.5 degree Celsius in average global temperature. The expert consensus is that this goal cannot be reached, given inadequate current policies and parsimonious expenditures to combat global warming. A 2 degree increase seems inevitable – and it could go higher, as the warming process becomes more self-sustained and rapid. In a very real sense, we are facing a long period of what could be called “the end times” – not in the Biblical sense of the Rapture and the end of the world, but in a very real secular sense. The species is facing, in the foreseeable future, the end of the industrial civilization we have built since the Industrial Revolution of the 18th century. The human species will not disappear, but it will face endless calamities, and many will face death.

Scientific experts, and public intellectuals like Naomi Klein, note global warming cannot be reversed. But it can be slowed and eventually stopped if we quickly abandon our fossil fuel consumer economy and move to green energy technology. Perhaps it can be stopped at a 1.5 degree increase, or less hopefully but more probable, 2 degrees. But if it edges toward 4 degrees, ocean levels will rise 1 to 2 meters and drown a number of island nations and swamp heavily populated coastal regions, including most of the world’s major cities. And no one knows for sure what kind of sustained weather disasters the world will face. We only know they will make those we are now dealing with look benign.

Meanwhile, Crystal Cruises have announced luxury voyages through the Northwest Passage in 2017 and 2018. •

With thanks to Naomi Klein’s This Changes Everything: Capitalism vs the Climate (2014), Ian Angus’ Facing the Anthropocene: Fossil Capitalism and the Crisis of the World System (2016), and various articles by experts on glacier and Arctic melt. The Thompson quote is from Klein, p. 15.